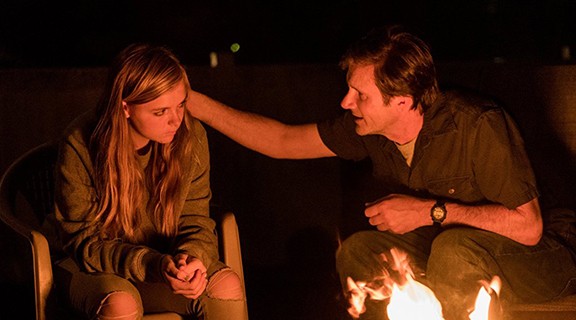 Every decade, there's a movie I could deem "Best Movie About Growing Up" in that 10-year span.

Here in the 10s, or whatever the hell you call them, we have a new frontrunner, that being Bo Burnham's incredibly awesome feature writing and directing debut, Eighth Grade.

This movie is a masterpiece in so many ways, from its perfect casting, to its crafty camera work and immersive electronic score by Anna Meredith. But, most of all, this movie is what it is for its central performances from Elsie Fisher as Kayla and Josh Hamilton as her dad.

Going into this movie, I didn't realize Fisher was already a cinematic hero of mine. As it turns out, she's the voice of Agnes from the first two Despicable Me movies. Agnes is the "It's so fluffy I could die!" girl. So Fisher, in my mind, is one of the great vocal actresses of all time, because that moment right there is legendary in the world of animation. Hell, I have it as a ringtone.

In Eighth Grade, Fisher shows her talents go well beyond vocal, creating a character that captures the awkwardness, joy, sorrow and virtual hell of that last year before high school when everything is just about to shift into an all-new, freaky gear. Yes, the movie captures the significance of social media and its impact on adolescents, but so much of this film is timeless and universal. It's a storytelling triumph.

Kayla is an introvert (she wins "Most Quiet" in the final days of junior high, much to her chagrin), but she expresses herself well on her YouTube channel featuring tips for her peers. Few of those peers actually watch her videos, a sad thing considering they are actually quite incisive and might help some of her brattier classmates to be better people.

To her horror, Kayla is invited to a popular girl's birthday party, something akin to a swim in the river Styx in her mind. It's in this scene that Meredith's score truly shines as Kayla takes that dreaded walk from the house to the pool, feeling alienated amongst dancing partygoers as the soundtrack pounds. It's a great moment.

While the film can certainly be categorized as funny, it tackles some of the nasty side of a girl's childhood head on, sometimes in scary fashion. As Kayla prepares for high school, she winds up in a situation or two that takes her from joyful elation to horrified in mere seconds. It's heartbreaking, even terrifying to watch at times, but Burnham and Fisher expertly navigate the emotional waves.

I'm giving early nominations for Oscars (Hey, it's my column and I have the power to do that in my alternate reality!) to both Fisher and Hamilton for what they do together in this movie. Fisher is a legit Best Actress contender and Hamilton for Best Supporting Actor. They make for an all-time great father-daughter character pairing, right up there with this summer's also great Nick Offerman and Keirsey Clemons in Hearts Beat Loud.

I love this movie. It had me laughing my ass off, wide-eyed with terror, crying like a baby and smiling from ear to ear. Congratulations to Mr. Hamilton for getting the role of his career, and congrats to Fisher, who has a nice long beautiful career ahead of her if she wants it.