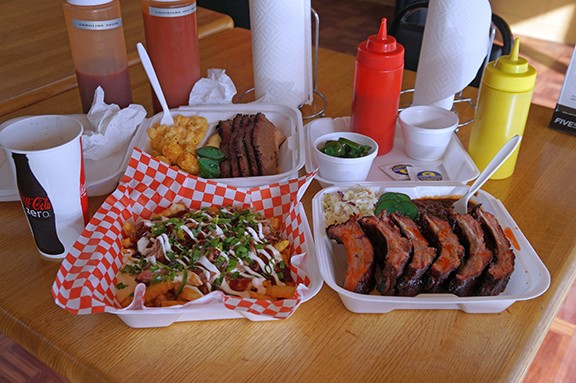 Mark Whittaker
Smoke ‘em if you got ‘em!

We have a sunset to thank.

"I was driving back from Phoenix as the sun was setting and, I swear, the sky and the land were just bright red. So, I said to myself 'Wow, look at that red desert.' I liked the name so that how it started."

Red Desert BBQ & Catering owner and pitmaster David Martin originally used the Red Desert name for a landscaping business he once operated years ago. After a few scrapes and glitches with various jobs, including eight years working in a copper mine, he eventually went back to his original fervor, slow cooking and smoking meats, and that's when he purchased a food truck. The grand truck opening took place on Martin's property out on Wetmore and he sold out within a few hours. From that success he joined up with a prominent food truck community but quickly left when they demanded 20 percent of his daily take.

"After severing ties with that organization, I actually started to do a lot better, business wise, just by word of mouth," he says. "But when this property became available, I knew the time was right to move in and let the truck go."

Martin sold his food truck to the Flores family, of El Charro fame, and opened the doors of Red Desert BBQ late last autumn. So far, the response has been a slow burn, although things are about to get hot for Martin and Red Desert BBQ because his product is simple, straightforward and above all, sublime.

If you keep up with the culinary whirlwind that is happening in Tucson, you may have noticed a big influx of barbecue joints opening up. This is a very good thing. I have been to most, but had to give Martin and his food some press because his recipes and craftsmanship shine on meats that are derived from several different American styles of grilling and smoking.

"My pulled pork is definitely Georgia style while my brisket is inspired by Texas," he says. "Chicken doesn't get a lot of love from many barbecue regions so mine is unique, a secret blend of spices, then I slow smoke it for a few hours. Let's just say the chicken is Tucson style."

Martin's brisket is tender and full of rich flavor even though it is just a rub of salt, pepper and granulated garlic. The secret is less about spices and more about time—that elusive element that makes 'cuing so special.

When I bit into the ribs, which are down the St. Louis route, my knees wobbled a little because the use of sauce. Absolutely fantastic. The process to get them so succulent is quite inventive. Martin smokes the ribs for about two hours, then wraps them up to hold in that flavor, essentially braising them, for an additional two hours. A few minutes before it hits your table, he puts them back in the smoker and glazes them with a house BBQ sauce, which gives them a nice stickiness, so what you get is a tender, tacky and stunning rib-eating experience.

So the brisket is done Texas style, the pork hints at Georgia, the ribs nudge towards St. Louis and the chicken is distinctly Tucson. You could say Red Desert BBQ is about as patriotic as you can get in a strip mall on the 900 block of Prince Avenue.

"Some longtime Tucson residents might remember a barbecue truck called Bobby Dean's," Martin says. "That's where I got my inspiration from. I bought my first smoker from Lowe's and did a whole turkey and things just took off from there. After graduating from culinary school in 2008, I worked at Ventana, but grilling and barbecuing has always been my go-to method of cooking."

That training and passion comes forth in everything Martin offers up, from the fatty, juicy meats to the creaminess of his potato or macaroni salad to the always appreciated loaded tater tots. The interior look of Red Desert BBQ even reminds you of a roadside pit stop, one you would find in the dusty brambles of a small southern town with a curious name. But the lime ickles (yes, you read that correct: lime) are at first a bright green curiosity that quickly evolve into a why-do-I-like-these-so-much obsession.

To top it all off, local food celebrity Lindon "Lindy" Reilly is in the back, manning the grill and assisting David in delivering just a few delicious products done with attentive care and an obvious love for real barbecue. With the help of Red Desert BBQ, hopefully someday Tucson will become a barbecue destination. Martin still won't divulge the seasonings and brining process that go into his "Tucson style," so we'll just have to be patient.

In the meantime, dig in!