Whether you’ve got friends in town for Thanksgiving weekend or you’re looking to entertain someone now that the holiday season is in full swing, Tucson has plenty of elegant spots to enjoy a winter cocktail or a fine meal. Every place on this list is a dining destination itself, but you can even use this roundup as a tour of some of the most tasty and charming spots around town. From downtown pubs to midtown eateries, there’s plenty for the solo adventurer and an entire holiday party. Cheers and bon appetit!

The Coronet. 198 W. Cushing St. Located in what used to be Cushing Street Bar and Grill on the edge of Barrio Viejo, the Coronet offers a menu built around surf-and-turf dishes and sophisticated cocktails in an elegant atmosphere. When it comes to the cocktails, we really enjoy the Winnemucca Punch, a citrusy blend of liqueur, cognac and grenadine that isn’t too sweet but still manages to be sippable. But it’s hard to beat their extensive menu of gins, mezcals, scotch and much more. Be sure to check out their sister operations under the same roof, The Meyer Avenue Cafe and Mercantile, which offers breakfast and lunch along with to-go items, and the Nightjar, a separate pub with its own vibe. Suffice it to say, we’re glad Coronet’s move from Fourth Ave. didn’t come with too much of a change in style.

Little Love Burger. 312 E. Congress St. This burger and craft beer joint has opened in the old Diablo Burger space in downtown’s Rialto building with a menu that includes burgers, chicken sandwiches, hot dogs and shakes made with HUB ice cream. You’ll also find craft beer on tap alongside red and white wine. The new eatery is still getting on their feet, but their central location and variety of options are a good hint toward a future favorite.

Good Oak Bar. 316 E. Congress St. Good Oak Bar closed down for a year thanks to the COVID outbreak, but the tiny tavern has reopened. With just a few booths and a handful of barstools, it’s not the place for a crowd, but the intimate setting can make for a memorable evening. Expect to find craft beer on tap, Arizona beers and plenty of great pub fare like fried pickles, house-made potato chips, and parmesan fries.

Reilly Cocktails and Craft Pizza. 101 E. Pennington St. & 7262 N. Oracle Road. We particularly enjoy how Reilly ventures into the realms of pizza and drinks, but doesn’t rely on both. If you’re just going there to grab a slice, you’ll leave satisfied. And if you only want a cocktail, there’s plenty of options. But if you combine the two, you’ve got a craft combo worthy of a late-night jaunt. Their second location on Ina and Oracle opened earlier this year, if you find yourself on the north side and in the mood for a craft pizza you won’t find anywhere else. 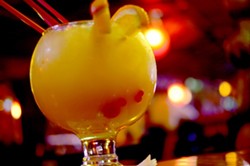 Kon Tiki. 4625 E. Broadway. This Polynesian wonderland has been the go-to spot for cocktails for nearly six decades. Who doesn’t love tropical-meets-tasty? They serve a variety of favorite island foods, from Polynesian BBQ to potstickers to calamari. They’ve even got a whole luau platter and specials for taco Tuesday. But that’s not to say they’re skimping in the drink department. After all, what would a Tiki bar be without giant, sweet cocktails to be enjoyed out of charming containers? From banana and rum to vodka and passionfruit, Kon Tiki serves the goods. Let’s not forget the classic drink “bowls” that can satisfy a whole party. The fact most of their drinks are under $10 is the cherry on top.

Tough Luck Club. 101 E Pennington St. While you’re at Reilly’s downtown location, pop around the corner and down some stairs to one of downtown’s (literally) hidden gems. Tough Luck Club is an underground bar perfect for a late-night meet-up with low lighting, a relaxed atmosphere and plenty of drinks. Whether you’re looking for local craft beer, wine, or house cocktails, you’re in luck at this subterranean spot.

Caruso’s. 434 N. Fourth Ave. If we’re talking about places to meet with friends and fill a lot of bellies, it’s hard to ignore this Fourth Avenue staple. For the better part of a century, Caruso’s has been serving up Italian favorites with serving sizes made for to-go boxes. Inside one of Tucson’s oldest family-owned restaurants, Caruso’s famous copper pot has simmered their signature red sauce since the early days. If there’s a classic Italian dish you’re in the mood for, chances are Caruso’s will serve it up the right way.

Batch. 118 E. Congress St. Here’s a combo we can get behind: whiskey options from all over the world, bar snacks, and over-the-top doughnuts all in the same place. Downtown’s Batch has carved a niche for themselves that’s hard to beat. And to make the weekend a little sweeter, you can also find street tacos at Batch every Friday night.

47 Scott. 47 S. Scott Ave. Yes, it’s the address and the name! But more than an easy name, 47 Scott is a bistro/bar pair that has fed downtown for more than a decade. The hip and relaxed atmosphere is a nice break from the bustle, but don’t let that deceive you: their extensive cocktail menus (we’re talking dozens of cocktails alone) are enough to keep you active until the wee hours. 47 Scott’s restaurant and bar are currently closed while they repair some fire damage, but we wish them a quick recovery so they can resume serving up favorites in no time.

Hotel Congress. 311 E. Congress St. While Hotel Congress just passed the century mark, it manages to pay homage to its history while still maintaining a modern—or perhaps timeless—sense of style. Whether you want a drink in the Tap Room or breakfast, lunch or dinner in the Cup Café or on the expansive plaza, you can bet you’ll have a wonderful experience at Hotel Congress. While you’re there, you can also do some holiday shopping if someone on your list is into Congress swag.

Owl’s Club. 236 S. Scott Ave. A short walk from the downtown stretch, Owl’s Club is a tranquil bar in a historic building. Although the bar is relatively new, their cocktails speak for themselves. Our favorite has to be the cinnamon-pomegranate-grapefruit-lime Zombie. (And not just because it has the most alcohol!) But whatever high-quality craft drink you’re enjoying, Owl’s Club’s atmosphere will make it that much nicer.

Rollies Mexican Patio. 4573 S. 12th Ave. South of downtown, Rollies has earned a devoted fan base and a reputation for authentic street food style. Yes, they dish up all the enchiladas, quesadillas, burros and tacos you can hope for. But it’s also worth noting Rollies has taken home the Best of Tucson® award for Best Birria multiple years in a row. They serve a birria plate, birria ramen, and even a birria burger. But our favorite item on the menu has to be the equally ridiculous and delicious concha ice cream sandwich for only $5. What a way to beat the heat!

Raijin Ramen. 2955 E. Speedway Blvd. It’s almost impossible to discuss noodles in Tucson without bringing up midtown’s beloved Raijin Ramen. This noodle shop has won over the Old Pueblo thanks to their hearty bowls with pork broth, eggs, fried onion, pickled ginger, black garlic and more. They also have a tasty green bowl for vegetarians, and side dishes worthy of your attention. But what really puts Raijin on this list is their great selection of sake, chu hi, hot sake, imported beers, and even some unique Japanese craft beers. Not that Tucson’s winters are particularly bitter, but a hot bowl really does hit better when there’s a chill in the air.

Pinnacle Peak. 6541 E. Tanque Verde Road. If you’re looking to take the family out on the east side, Pinnacle Peak should be under serious consideration. Not only is it a top-class steakhouse, but it’s located inside Trail Dust Town, so the kids can have all sorts of fun riding the train or the carousel, panning for gold, learning new tricks at the magic shop or—of course—exploring the candy shop. Meanwhile, the adults can enjoy a normal conversation or belly up to the bar for a cocktail. Just don’t wear a tie!

BOCA Tacos Y Tequila. 533 N. Fourth Ave. If you’re just trying to show off Tucson’s culinary prowess to out-of-towners on holiday, BOCA Tacos Y Tequila is a perfect stop. Expertly curated by Chef Maria Mazon, BOCA specializes in cooking up custom salsas that are “hotter than your wife.” Curry salsa, black bean salsa and more are the perfect tops to their artisan tacos. Wash it down at their bar with some tequila or Mexican beer and you’ve got a meal worth raving about to every Fourth Ave. passerby.

Tumerico Cafe. 2526 E. Sixth Street & 42 E. Fourth Ave. This new kid on the block has earned rave reviews since opening its doors. Tumerico serves up vegan and gluten-free dishes, but you’d never notice a lack in flavor. From jackfruit carnitas to Cuban tacos, Tumerico’s food packs a flavorful punch that you can feel good about. The fact this is one of Guy Fieri’s favorite spots in Tucson is proof enough Tumerico will impress your friends and family.

Yoshimatsu Japanese Eatery. 2741 N. Campbell Ave. A perennial Best of Tucson® winner, Yoshimatsu serves a variety of Japanese bento boxes, noodle dishes and sushi, all in a charming atmosphere. Cocktails include Chu-Hi (a mix of Japanese sho-chu and soda) as well as flavored nigori and a few standards. You’ll also find a fine selection of Japanese beers to accompany your meal. And if you’re looking for a quick holiday gift for the otaku in your life, browse their cute gift shop while you wait.

Tap & Bottle. 403 N. Sixth Ave. & 7254 N. Oracle Road. If you need a local craft beer or an Arizona wine for the holiday party you’re attending, Tap & Bottle has you covered, with a wide selection of both. And if you’re not looking for a local beverage, they’ve got plenty of other beers and wines from around the world, along with hard kombucha and ciders. Plus, while you’re browsing, you can sit down for a drink, which is often helpful while holiday shopping or when you’re prepping for a family get-together.

The Parish. 6453 N. Oracle Road. Tucson’s only Southern Fusion Gastropub also happens to be one of the best places in town to grab a bite and a cocktail. Their Southern-style cuisine includes Louisiana classics like spicy shrimp gumbo, beer-battered catfish, and crawfish. However, their cocktail menu is a world all itself. Their signature cocktail, The Parishoner, just won the Best of Tucson® award for Best Cocktail and comes with house-infused basil vodka, fresh lemon juice, grapefruit bitters and orange flower water for a sweet and citrus-y drink that packs a punch but still feels elegant to sip.