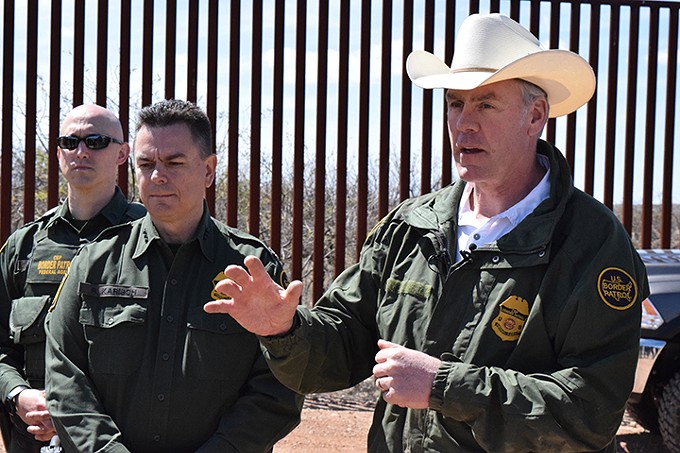 More than 80 percent of the Border Patrol's Tucson Sector is public land, of which 177 miles—stretching across national monuments, tribal lands and wildlife refuges—are managed by the Department of Interior.

"Clearly, you want to make sure that a barrier doesn't adversely affect wildlife and takes into consideration the floodplains," Zinke said.

Homeland Security has, in the past, waived environmental regulations to build border walls. The existing wall has already had adverse environmental effects, fragmenting habitats and wildlife corridors.

A 2011 study by the Journal of Conservation Biogeography estimated that 134 mammal, 178 reptile and 57 amphibian species live in close proximity to the U.S.-Mexico border, 50 of which are threatened species.

During monsoon season, the wall has become a dam, intensifying flooding. In the summer of 2008, debris piled up against the fence as water rose two to seven feet high, flooding the border towns of Lukeville, Arizona, and Sonoyta, Sonora, and eventually toppling the multi-million-dollar fence.

Environmental-protection organizations in the borderlands have long opposed a wall, including the Center for Biological Diversity.

"Zinke's Arizona dog and pony show doesn't change the fact that border walls are disasters for communities and wildlife," said Randy Serraglio of the Center for Biological Diversity. "Public lands, people and animals are being sacrificed for Trump's nativist campaign promise. Zinke is pandering and preening for cameras in a place he knows nothing about, while resistance to this destructive border wall grows stronger every day."

Zinke said protecting the environment, despite the complications of a border wall, is important. But he's leaving the best way to do that up to the experts.

"Mostly what I saw out there from environmental damage is the unconstrained illegal traffic and the trash left behind," he said.

Karisch, who was showing Zinke around the border, said the footprint created by the wall is less damaging than the human traffic it has deterred.

The influx of Mexican immigrants peaked at more than 1 million in 2000, 50 percent of which overstayed visas, according to the Center for Migration Studies. In large part, this was due to Mexican workers feeling the effects of the North American Free Trade Agreement, which shifted economies and destroyed livelihoods.

Since then, undocumented migration from Mexico steadily dropped to current levels, which are as low as the 1980s. Migrants crossing the desert borderlands now tend to be from Central American countries, where growing violence and gangs cause entire families to flee for their lives.

Another devastating effect of the wall is its contribution to pushing migrants crossing the desert into harsher terrain, decreasing their likelihood of survival. The Pima County Medical Examiner receives an average of 169 human remains a year from migrants who died while crossing the desert—a number that human-rights groups say is much lower than the total number of deaths.

"We love immigration," he said. "Our country's made of immigrants, so we have to have a policy that's fair, that's sustainable over the course of time."

Leaving Buenos Aires, Zinke headed to the Tohono O'odham Nation, where people have been staunchly against a border wall on their tribal lands.