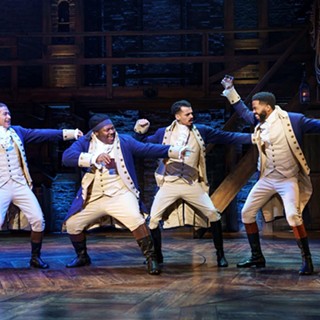 Courtesy photo
The hit musical “Hamilton” was postponed multiple times from Broadway In Tucson due to the pandemic, but is on schedule to debut Nov. 17.

In the opening scene of Hamilton, the characters who will become America’s founding fathers crowd the stage.

There’s a Jefferson here and a Madison there and a Washington over yonder. But there’s a newbie too, and the suspicious Aaron Burr demands to know who the fellow is.

“What’s your name, man?” he sings in a hip-hop cadence.

The stranger stands in the center of the stage, in the spotlight, looks proudly around and boldly sings out: “Alexander Hamilton!”

Last Thursday night, the huge audience in Centennial Hall roared when they heard his name.

Julius Thomas III, the dashing actor playing Hamilton, smiled at the crowd, and chuckled lightly at their fervor. He waited until the fans’ cheers went down a notch. Then, going back into character, as a supremely self-confident young man, he roared right back: “My name is Alexander Hamilton.”

You couldn’t blame the enthusiastic patrons in the seats, some 2,500 strong. They had waited two long pandemic years to see the smash musical about an unlikely immigrant who shoots to power in the early years of the Republic. In 2019, Broadway in Tucson announced a performance of Hamilton in 2020. It was canceled by COVID, and finally staged now, in late 2021.

The ground-breaking musical, winner of 11 Tony Awards in 2015 and a Pulitzer Prize in 2016, turns what could be a dusty old story of government and politics into a rollicking spectacle. Almost every line in the show is sung in bouncy hip-hop and rap, performed sometimes solo and often by the whole cast, 14 actors and 11 ensemble players at once. This contemporary music transforms the work from the late 18th century to the present.

As the talented Lin-Manuel Miranda—creator of the Hamilton book, music and lyrics—has said, the show is “America then, as told by America now.”

That America is full of ambitious, conniving, smart and lively young men, all of them arguing over what the new nation they have created should be. You will detect no sign of the stolid founding fathers that we are used to seeing hanging in dull portraits. Instead, you’ll find young, multi-colored cast, with the main characters portrayed by Black actors: George Washington (Darnell Abraham), Thomas Jefferson (Paris Nix) and the rivals Aaron Burr (Donald Webber, Jr.) and Hamilton himself.

From the beginning, there is no secret how the story ends. Even high school students still know (I think?) that Burr killed Hamilton in a duel. And in the first scene, Burr admits, “I’m the damn fool that shot him.”

The storyline is really about what made Hamilton click.

Burr puzzles over Hamilton’s surprising success in life. George Washington relied on Hamilton as an aide-de-camp in the Revolutionary War and later, as president, named him the first Treasury Secretary of the United States. Hamilton’s efforts with the nation’s money still influence the government.

“How does a bastard, orphan, son of a whore,” an immigrant from the Caribbean. “grow up to be a hero and a scholar?” Burr asks.

The energetic Hamilton occasionally reveals the answer. “I am not throwing away my shot,” he likes to say as a young man. “I’m young, scrappy and hungry.” He’s brilliant and hard-working, but he’s not without fault.

Miranda made an effort to bring women into a tale that is mostly male. The Schuyler Sisters song introduces the woman Hamilton was to marry, Eliza Schuyler (Victoria Ann Scovens),  and her sister Angelica (Marja Harmon), an intellectual woman who, in Miranda’s telling, had feelings for Hamilton, her brother-in-law. But Eliza emerges as a strong woman, and Scovens delivers one of the most powerful scenes in the show.

This is a good time to say how gorgeous all the players’ voices are. In particular,  Scovens is a beautiful singer and Brandon Louis Armstrong, who plays James Madison, has a voice that’s positively operatic. Armstrong is also a great comic on stage, and so is Nick Negron. Negron, playing the petulant King George of England, delivers hilarious solos every time the fledgling Republic goes amiss.

Finally, the dancing is superb. Choreographed by Andy Blankenbuehler, the movements are in almost every scene, with the dancers shape-shifting around the actors, shimming like snakes, subtly slipping into a soldier’s sheath. The dances amplify the actors, the singers and the set and nearly everything in this marvelous show.

Musical presented by Broadway in Tucson through Dec. 5, various times

Theatre-goers must show a card certifying they have been fully vaccinated, or provide proof of a negative COVID test within the last 72 hours of showtime

Elf on a Stage: Gaslight Theatre serves up holiday magic with Elf’d