I generally haven't liked the American Pie films. They're lazy and sloppy, with only occasional moments of genuine laughter. They give R-rated comedy a bad name.

American Reunion brings the gang back together 13 years after the so-so first film, and nine years after the abysmal American Wedding. I actually had hopes for this one, because it is directed by Jon Hurwitz and Hayden Schlossberg, writers on the Harold and Kumar series and directors of Harold and Kumar Escape From Guantanamo Bay (which was the weakest of that series, but still funny, in a spotty sort of way).

However, the result is a predictably tired comedy in which Seann William Scott (Stifler) and Eugene Levy (Jim's dad) are responsible for most of the laughs. Seeing the likes of Scott, Levy, Chris Klein (Oz) and—to a certain extent—Jason Biggs (Jim) together again is kind of cool. However, having to sit through line readings by Thomas Ian Nicholas (Kevin), Alyson Hannigan (Michelle), Tara Reid (Vicky) and Eddie Kaye Thomas (Finch) ... not so much.

There are lots of slo-mo, Michael Bay-esque shots of the boys walking together throughout the film, like we're supposed to get some sort of charge out of seeing these actors together again. I would get more of a charge seeing the cast of, say, Idiocracy doing a big reunion movie. At least Idiocracy was really funny, and it had Terry Crews in it.

The plot involves the characters coming home for their 13th high school reunion, and there's a major "Jim and Michelle ain't having sex no more" subplot. Oz has become a bubble-headed sportscaster, Finch a world traveler, Jim a sex-starved new dad, and Kevin a homebody husband with a new beard. (His beard is one of the better running jokes in the movie.) They all want to party and hang out like old times—while excluding Stifler, because he's nuts. He, of course, finds his way into the mayhem.

That mayhem includes the requisite gross-out gags, like Stifler shitting into a beer cooler, and Jim's dad revealing embarrassing sexual details to his son. In one of the film's funnier sequences, Jim's dad has a rendezvous with Stifler's mom (Jennifer Coolidge). Again, Levy is the man, and he makes his moments work.

Scott's Stifler has mellowed a bit. He has minimized that annoying laugh thing he does, which is a good thing. If you are a Scott fan, I would recommend watching him in his new hockey comedy, Goon (coming to the Loft Cinema on April 27) over any American Pie film.

Seriously: A movie in which Stifler, Oz, Jim and Jim's dad go on a fishing trip, with Kevin drowning within the first 10 minutes, would be a better movie. I like those four characters just fine; the rest of them clutter things up. I have no need for characters played by Natasha Lyonne and Shannon Elizabeth. They only get one scene apiece in this film, but that's still too much.

Katrina Bowden, who was all sorts of awesome in Tucker and Dale vs. Evil (and is another Marcia Brady lookalike) is a decent standout among the newcomers as Mia, Oz's supermodel girlfriend. She plays a ditz—and she plays it well. She's freaking Meryl Streep next to Tara Reid when it comes to acting chops.

Scott, Levy, Klein and Biggs have a reasonable amount of talent. I wouldn't be opposed to seeing them in a different project altogether, in which they get to share the screen and perhaps play against type.

American Reunion has its moments, and is the second-best film in the series after the original. I just fear the next film will be something like American Divorce, where we will have to sit through lawyer meetings with Jim and Michelle, or American Rehab, with extended scenes of Stifler in group therapy.

American Reunion is not showing in any theaters in the area. 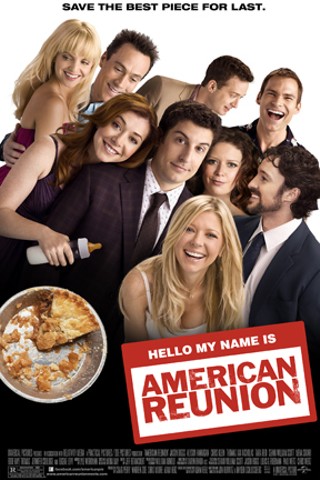