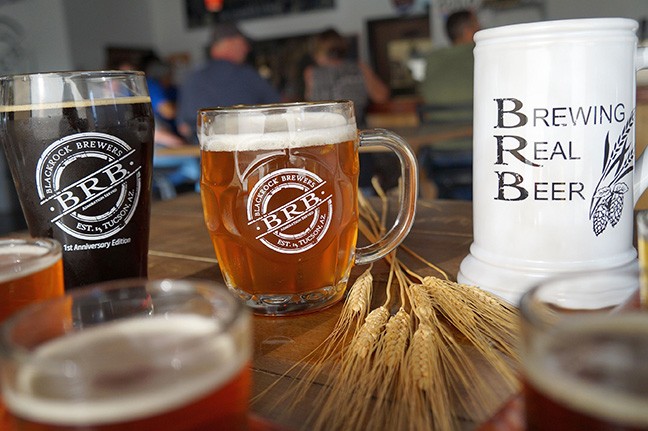 Do you think we have enough breweries in Tucson yet?

Well, take this into consideration: Portland, Oregon, boasts about 60 breweries at present, with more moving in. Denver is easily up to 80. Several California cities are moving past the 50-plus mark, with Austin, Seattle and New York barely trailing behind.

The reality of all this foamy expansion is that most are doing exceptionally well. People sure love those crafted beers. It makes perfect sense if you're into that sort of thing—and apparently you are. A comfortable environment to sip inventive brews made by someone that you might possibly know does not seem like a roadmap to a nightmare.

Here in Tucson, it's about supply and demand—and demand is growing at a fast rate.

As you read this, we have roughly 30 breweries. That list will increase in the next few years as another dozen or so are in the process of setting up, making us a contender in the great American brewery race.

In the depth of our usual summer sizzle, I chanced upon an orange dreamsicle cream ale from a local spot called BlackRock Brewers. On the patio of a neighborhood beer hall, I sipped this devilish citrus and immediately asked: "The hell is this?" When I found out the name of the brewery, I had to investigate, hoping to sit tableside with the shaman who could concoct such refreshing brilliance.

Getting to BlackRock Brewers was a seemingly easy plight, but I found myself swirling around an industrial section of the east side near the Pantano Wash, wondering if I had keyed in the wrong address on my smartphone. Nope. It's just a bit out of eye range for the uninitiated. Once inside, I was pleased to find ringing pinball machines and video game cabinets. A dart league was in full competition and one of my favorite food trucks was set up outside. Through the near capacity crowd, I lucked upon owner and operator Tony Williams, who first drew me a Scottish ale before telling me about his recent rise to foamy fame.

Williams' wife bought him his first homebrew kit in 2009.

"I was really into amber ales, so she just suggested that I make my own," he said. "With the help of some friends, our recipes started to get better and better. Then the idea to open a brewery hatched and in early 2017, we found this location and just went for it."

Originally hailing from Iowa, Williams has been a Tucson transplant for 20 years. His background was in music, playing all styles ranging from jazz to punk, but it wasn't until he started brewing beer that Williams found his true calling.

"With BlackRock, my idea was to cover the whole spectrum of beer, from white beers to IPAs, with a twist on each variety," Williams said. "We've got this roasted green chile hefeweizen that is spicy but not too spicy. Our focus is to use as many local ingredients as possible. It's a bit pricy to appropriate Arizona wheat but it is so worth it."

In the brief time that BlackRock Brewers has been in operation, they have won silver and gold medals for their Baja Sol West Coast IPA and have been featured in several festivals across Tucson and beyond. The beer can be found in local restaurants such as Bear Canyon Pizza and Mama Louisa's, just to name a few.

Williams is grateful for the help he's getting from the brewing community and sees a future when BlackRock bottled beer is available on the shelves.

"The Arizona Brewers Guild is very helpful, and they just jumped in with ideas," Williams says. "We might be bottling soon but for now, you'll just have to come in, sit down and enjoy a pint."