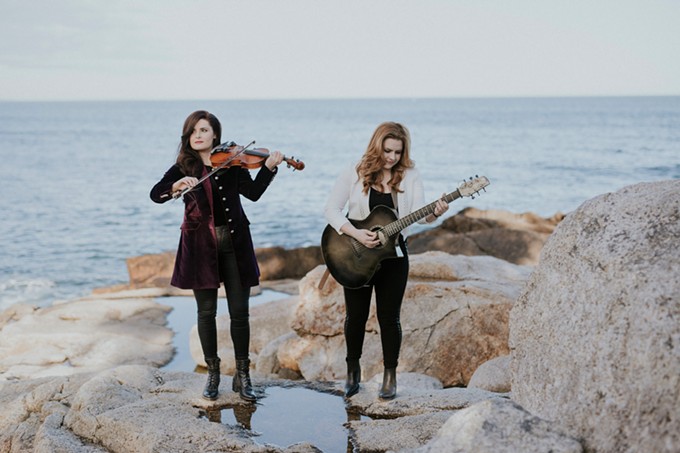 After two sorry years of shutdown—thanks, COVID—Tucson is once again bursting with craic, the Irish word for good fun. The St. Patrick’s Day Parade & Festival is back, and so are concerts of Celtic music, dishes of Irish stew and a wee dram of spirits. You’ll even find some Irish art.

On the night before St. Patrick’s Day, a couple of musical lassies from Nova Scotia will be singing, playing instruments and yes, dancing, to the tunes of Celtic music at Berger.

The two eclectic musicians, Cassie and Maggie MacDonald, are sisters, grand-daughters of a pair of Nova Scotians who helped bring traditional Scottish and Cape Breton music to a wider Canadian audience. Maggie plays fiddle and sings and dances, and Cassie commands the keyboards, mandolin and guitar. But what about Irish music? Fear not, fans. The MacDonalds have won awards from Irish groups more than once, and they plan a Hibernian treat on the eve of St. Pat.

Here’s a Q&A with Cassie and yours truly.

How did COVID affect your work the past two years?

We were just one gig into a spring tour that was meant to last seven months when COVID put a wrench in all international travel. Our last gig was in Tulsa, on March 16, 2020, so it’s quite full circle for us to be in the U.S. exactly two years later. We are performing our first show back with you all in Tucson! Will you play some Irish tunes? We’ve got a couple surprises in store to make sure we celebrate St. Patrick’s Day in style, definitely some familiar Irish songs where folks can sing along. We’ll also do some lesser-known traditional ones with wonderful stories and history.

What is the difference between Scottish and Cape Breton music and Irish music?

A lot of it comes down to repertoire, and very specific stylistic differences in the approach to swing, tempo and ornamentation. Maggie and I are very lucky to have been brought up in an extremely musical family in Northern Nova Scotia. Nova Scotia means “New Scotland” in Latin so we tend to have a heavier influence from the Scottish style of playing. But over the years our home province has been recognized on the world stage for unique styles of fiddle playing and singing that sort of stands on its own.

That music is extremely close to our hearts, which certainly includes the music we learned from our grandparents. Our grandfather, Hugh Angus MacDonald, was an incredible fiddler and one of the very first musicians to record traditional Nova Scotian fiddle music, back in 1935. These older tunes are very special to us, but we equally love to bring a modern and contemporary approach to the traditions we’ve inherited.


Does Maggie really dance while she is playing music?

Yes! Dancing is a very important part of the Celtic traditions in Nova Scotia and we always love to put a bit in the show. It’s a very specific style of percussive stepdance that has developed alongside the unique style of fiddling from Nova Scotia. Maggie has been known to throw her guitar over her shoulder and “give a step,” as we would say!

We’ve been lucky to play in Tucson twice before. Our very first show was at the beautiful St. Francis in the Foothills Church in 2015. Then we were back in 2017 at the wonderful Berger center. We were absolutely stunned by the warm welcome we received on both occasions, not to mention the incredible natural beauty that met us everywhere we looked. We are thrilled to be kicking off a brand-new year of touring back in your beautiful city.