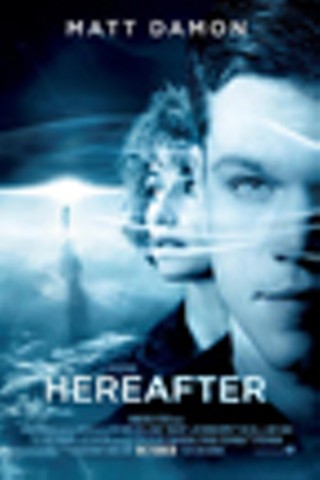 Matt Damon plays George Lonegan, a San Francisco sugar-factory worker who has the gift of being able to chat with dead people. He used to exploit this fact for money, but the whole notion of conversing with the deceased has him feeling cursed, and he wants to be left alone. Clint Eastwood’s latest directorial effort is quite boring, with Damon toiling in a film that goes nowhere. It starts out nicely, with a tsunami scene that might include the best visual effects ever in an Eastwood film. But things get dreary once the focus moves to Damon’s character and his reluctance to do psychic readings. (It makes it hard for him to get girls.) Steven Spielberg produced this movie, which makes sense, because Eastwood’s version of the afterlife looks exactly like the aliens and people coming out of the mother ship in Close Encounters of the Third Kind. All that’s missing is a gangly creature doing hand signals.
By Bob Grimm

Hereafter is not showing in any theaters in the area.

Reviews/comments (1)
Add a review
Subscribe to this thread:
By Email