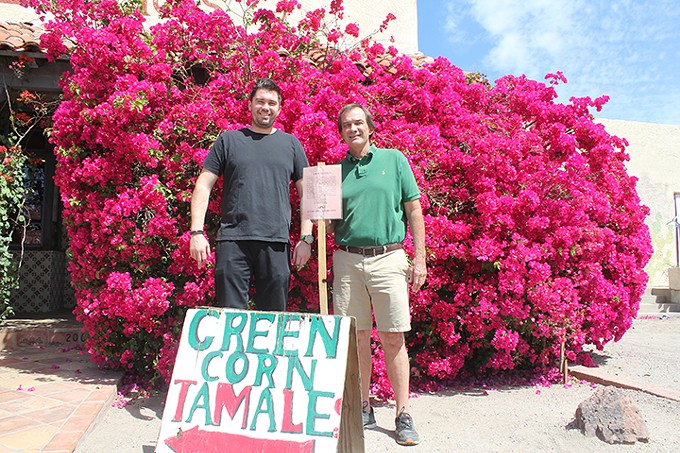 Courtesy
Mike Holquist, Jr., and father Mike Sr., hold the City of Tucson sign informing Lerua’s Restaurant that their property has “been appraised and an offer made.”

In today's culture, 666 is a widely-recognized symbol for the devil, used to invoke Satan.

Those same numbers appear in the Broadway Improvement Project: six travel lanes, six-foot-wide sidewalks and six-foot-wide bicycle lanes—a localized version of 666 that has summoned up visions of demons for those property owners with businesses from Euclid east to Country Club, the so-called Sunshine Mile.

Two years ago, the mayor and council, as part of Regional Transportation Authority planning, adopted a resolution authorizing the onset of property acquisitions in conjunction with those $71 million improvements. Preliminary timelines call for utility relocations to begin later this year, with construction getting underway in 2019.

The current design plan indicates a potential need for at least 50 total property acquisitions, with the City of Tucson required to pay "Fair Market Price" for any private property it acquires. While 21 of the affected businesses have already opted to accept the monetary offer, others are still working with the RTA's MainStreet Business Assistance Program to help them prepare for eventual relocation or the impact of long-term roadway construction.

Fourteen of the properties on Broadway were acquired by the city before the RTA project began. Of the 50 properties the city plans to acquire, the city has closed on 21 of them. There are 50 properties in this stretch of Broadway that fall under the current acquisition efforts. "To date, we have closed on 21 of those for either full or partial acquisition with the balance still under evaluation.  We have been unable to agree on a price for 13 of these properties and those are now involved in a court process."

Some vacated buildings have already been torn down while others are in various stages of take-the-money-and-run. For example, Pet Designs closed its brick-and-mortar location near Broadway and Tucson Boulevard and hit the road as a mobile dog groomer. Their former next door neighbor, Bernarda Veterinary Services, is preparing to relocate, retrofitting new facilities on North Campbell Avenue. And their neighbor, Metaphysics, has already torn down its sign and relocated to 22nd Street.

But some business owners who have received right-of-way buyout offers say the cash pot is nowhere near enough to even cover the cost of a relocation move, with 13 of them going to court with the city. One called her offer "laughable." But the owners of longtime Broadway fixture Lerua's Fine Mexican Foods, at 2005 E. Broadway Boulevard, finds nothing humorous in the buyout figure they received—less than two-thirds of their appraised value.

"It's their job to low ball, but we're getting screwed," says owner Mike Holquist, Sr. "They're smiling at us while offering no real money."

For years, actually decades, Hulquist has been trying to figure out the future of his establishment. He says barring condemnation or eminent domain, he's not moving for anything less than the appraised value.

"We've heard about this for 30 years, off and on," he says, admitting he has a list of needed improvements, some actually ordered by the city to meet updated code requirements. "But I'm not doing anything until I know what's going on. I've been waiting for some resolution since 1987 when they first told me they were going to widen the road. In fact, I have a photo from back then with me holding a sign that read—'Don't knock me down.'"

There's a new sign now in the dining area, a chalkboard with a message reading: "Don't ask us about Broadway widening—if they don't pay, we can't reopen."

Father and son speak in one voice. "Their buyout offer was BS," says Hulquist's son, also named Mike, while his father softens the response a bit, calling the $460,000 buyout offer for land and building "malarkey," based on their own appraisal figure of $750,000.

"They wanted us out by July 1, but we're now in litigation and that could take a year, so we'll keep our doors open during the legal proceedings," Hulquist says.

Now it's attorney-versus-attorney, like the shooting rivalry between the Hatfields and McCoys.

The long-time restaurateur is cautiously optimistic, holding out a glimmer of hope. "We've been feeding people for 96 years now," he says. "Can they find a jury panel that doesn't know me or the restaurant? Can they find 12 people who aren't tired of how the city treats small businesses?"

Ultimately, Hulquist says if they get the right amount of money, they'll probably try to find another place and continue offering their "famous green corn tamales," but if they lose, the city will have a right to just take the property.

And because Lerua's is the family mainstay and a much larger entity than the family's El Torero in South Tucson, the owners admit that if Lerua's goes, so too would the smaller eatery—two more restaurant closures to add to the 141 that have taken place in Tucson over the last four years.

"If I find bulldozers in my parking lot some morning, I'll know I've served my last taco, and right now, things don't look that great about our chances for survival," he says. "At this moment, we're fearing that the time has come where we may be forced to finally call it a century (96 years in business), offer our thanks to Tucson and be gone."