Prisoners moves quickly, tensely, but doesn't quite pay off

Prisoners, the new kidnapping thriller starring Hugh Jackman and Jake Gyllenhaal, is one of those movies that impresses while you are watching it, but loses a bit of its power upon reflection. By the time I got to my car in the parking lot after the screening, my head started going "Wait a minute ... that part didn't make much sense, now did it?"

I did enjoy the film on many levels. It's 2 1/2 hours long, and the time went by fairly quickly. The two leads are at the top of their games, and you just can't go wrong visually when Roger Deakins is working the camera.

It's just that somewhere around the third act, the kidnapping mystery element starts going a little haywire. Director Denis Villeneuve and writer Aaron Guzikowski are so determined to trip you up, their movie traipses over to the ridiculous side before the curtain drops. Not enough to completely derail the film, but enough to downgrade it a few notches into "good" film territory, rather than an excellent one.

Keller Dover (Jackman) and his wife, Grace (Maria Bello), are having a Thanksgiving get-together with friends Franklin and Nancy (Terrence Howard and Viola Davis) when both of the couples' daughters go missing. Keller's son Ralph (Dylan Minnette) had observed a messed-up looking RV near the house earlier in the day, and reports it. Detective Loki (Gyllenhaal) is called away from his Thanksgiving dinner in a greasy spoon when the RV is spotted. They arrest Alex Jones (a freaky Paul Dano), a man with an IQ of a 10-year-old, on suspicion of kidnapping.

Loki does his best to get info out of Alex, but to no avail. The suspect is released due to lack of evidence and Keller goes ballistic. He's convinced the man knows something, and takes matters into his own hands, resulting in Keller kidnapping Alex and some rather harsh torture scenes. Dano spends much of the film under heavy gore makeup.

Until this point, Prisoners is a "How far would you go?" movie, posing the moral dilemma of what lengths a parent would go to in order to find his child. Keller brings Franklin to the torture chamber, and the two put Alex through hell. The victim keeps dropping breadcrumb possible hints, with no real solid info, so the torture amplifies. It's brutal stuff, and credit goes to all three actors for convincingly conveying the humiliation, fear, regret and sadism that must go with such a situation.

Detective Loki is off in what sometimes feels like another movie, trying to solve the kidnapping and stumbling upon other crimes along the way. I'm thinking it was somewhere around the time that he was uncovering bloody storage bins full of snakes that the movie was losing a bit of its cohesiveness. As silly as his portion of the film gets, Gyllenhaal is rock-solid as Loki, a mostly quiet man laced with a bad temper that gets him and others into trouble.

The film is set in an often gloomy, gray, rainy Pennsylvania where everything looks plain and safe but dark things are happening in those old houses. Villeneuve and Deakins use this setting to maximum effect, and the film is always interesting visually. Film geeks know that Deakins is the go-to cinematographer for the Coen brothers.

I'll say this for the movie: It successfully keeps you guessing the identity of the kidnapper or kidnappers until late in the film. You will find yourself compiling a mental list of suspects as things transpire, and that list will basically include everybody in the movie. Everybody in the cast behaves suspiciously enough at one point or another so that they can't be dismissed as possibilities.

This ultimately hurts the film in many ways, as it strays from that core moral message and becomes a preposterous whodunit.

The film winds up being a bit frustrating. It contains some of the year's best acting and best visuals, and maintains a fierce intensity for much of its running time. That said, I can't deny its flaws, which render it part goofy. It's too bad; with a slight rewrite and tighter editing, this could've been one of the year's best pictures. 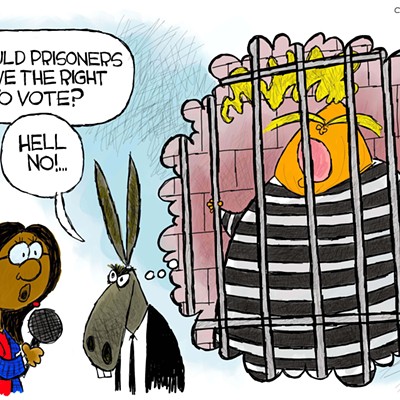