It has always been my belief that good service can somewhat make up for bad food, but bad service can ruin even the best of meals.

When mediocre service is combined with mediocre food, well, it's no surprise that the whole experience comes off as mediocre.

The Bisbee Breakfast Club, near the intersection of Ina and Oldfather roads, is the restaurant's second location. The other is in Bisbee, of course. The owners have done a nice job of removing the Pizza Hut vibe from the interior of the building—the décor is charming and bright, but the tables are squished together, and it gets insanely loud when there are more than a few tables occupied.

Ted and I first visited Bisbee Breakfast Club on a Saturday morning, and we got the last available table. We could scarcely hear each other across the table (and it wasn't a large table). We sat for several minutes before anyone came by, and then it was just for our coffee order—decaf for me, and none for Ted—which didn't arrive until after I put the order in a second time. Our server was apologetic, saying they were short a hostess and a server. Having worked in the restaurant industry, I can understand the extra time it takes when you're short-staffed.

We put in our order, got our orange juice ($2.25 each) and coffee (always free), and waited for our meals to arrive.

The food—which didn't take too long to arrive, considering how busy the kitchen staff looked—was unremarkable. The biscuits and gravy ($3.99 for a single split biscuit; $4.99 for two) that we shared were the highlight of the meal: The gravy was well-seasoned; the biscuits were flaky; and there was actual sausage in the gravy—something that is, for some reason, unusual at so many breakfast joints serving "sausage" gravy.

Unfortunately, my French toast ($5.59) did not stack up as well. The first slice was OK, although a bit bland, while the other three slices were gooey, raw and cold in the middle. Ted's corned beef and hash with two eggs ($7.59) was also just OK—the flavors weren't bad, though it improved with some salt and a little hot sauce. However, the food wasn't hot, and the hash browns weren't crispy. The eggs were over-easy, as ordered, although they weren't hot, either.

I returned for a weekday lunch with my friend Scott, hoping that the food would be better during a less-busy lunch shift. A server took our order for lemonade ($2.25), but we hadn't yet decided on our food, so we let her know we needed a few more minutes.

One of my pet peeves is when you ask for a few minutes to decide, and either the server comes back just 60 seconds later, or you don't see the server again for 20 minutes. In this case, both happened. Only three other tables were occupied, so the restaurant wasn't busy—although it still managed to be pretty noisy.

The food, when it arrived, was somewhere between OK and pretty good, but again wasn't hot. My "Gooey Louie" burger ($7.99) was ordered medium and was definitely well-done, although the toppings—barbecue sauce, Swiss cheese, bacon, sautéed onions and mushrooms—kept the burger from being dry. The sweet-potato fries were crispy and salty, but—yet again—weren't hot. Scott's "Huckburger" ($7.99), ordered medium-rare, suffered the same well-done fate, though he said he was surprised at the tasty combination of shaved ham, Swiss cheese and barbecue sauce on a burger.

The best part of lunch was the side order of onion rings ($3.29), which were hot, perfectly battered, crispy and seriously tasty.

Our server pretty much ignored us after dropping off the food, so we waited around an additional 15 minutes after we had finished our meals to get the check.

The Bisbee Breakfast Club definitely has the potential to be a neighborhood hot spot, but more attention to detail is needed, in both the service and the food. And if they could do something about the noise, that would be nice, too. 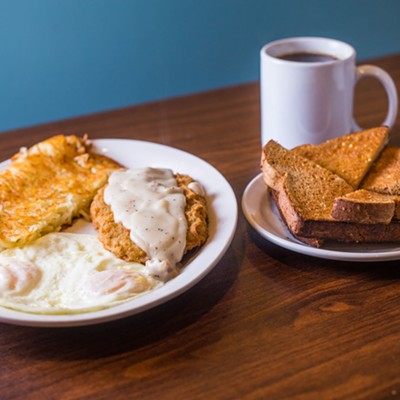