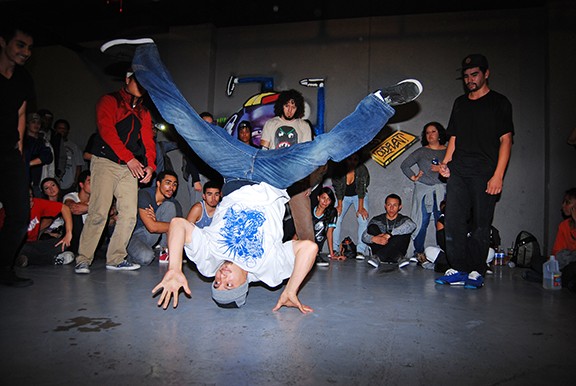 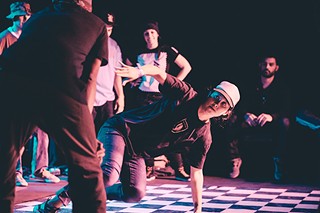 If you happen to hear a funky beat blasting from inside the Global Justice Center, it may be the local b-boys and b-girls getting together to breakdance.

The energy builds with each dancer who arrives to open practice, a recent Tuesday evening. They greet each other with mutual respect and affection. Although not all of them are part of the same dance crew, they're like family. From simple footwork to a head spin, they cheer each other on, shouting and videotaping.

Once or twice a week, they show up to the Global Justice Center in loose-fitted clothes, slide on their elbow and knee pads and dance the night away. Padding helps, but immaculate upper body strength is necessary.

Nearly every Tucson break-dancer has practiced at the Global Justice Center at some point, says b-boy Lucas Rodriguez. He's been breaking for 10 years, and was last year's b-boy ambassador at the Tucson Hip Hop Festival.

In 2009, he formed his first crew, the Wild Bunch, who since evolved into the Kids on Clouds. Although the crew has changed over time, it's always been a core of the same five or six dancers. Rodriguez says breaking is a good form of self-expression and a constructive way to release energy.

"We have positive and negative energy, and this is a good way to release both," he says.

Tucson b-girl Rachel Frank has a different take on why she breaks. Frank has been breaking on and off for the last four years. She believes it's a form of self-expression and creativity but also a way to break your own barriers. She says breaking brings her raw energy.

Breakdance evolved during the '70s hip-hop movement in New York City among black and Latinx youth. Since its evolution, it has spread across the entire United States and worldwide. Men and women from all over the world come together to compete and learn from each other.

The breakdancing community is a family. From its foundation, breakdancing was seen as a way to bring people together and that side of breaking has not disappeared. Rodriguez, Frank and their friend Armando Sotelo are all breakers with plenty of experience and have met breakers from all around the country and the world.

There are a range of different styles and techniques when it comes to breakdancing. Sotelo said depending on where you're located, each place has a different style and taste. Sotelo and Frank both said many b-boys and b-girls want to come across the U.S.-Mexico border to dance but can't because they cannot get visas or green cards.

"I've seen b-boys come who want to stay and learn but can't because they don't have their citizenship," said Sotelo.

A big factor in breakdancing is consistently learning from other people. Frank first learned to breakdance from her close friend and former roommate. But she's always learning new moves and techniques from other b-boys and b-girls.

Sotelo has been dancing for six years, and although he spends long hours at his day job, he spends all his free time breaking. He sees breaking as a lifestyle. Sometimes he comes into practices ready to hit the floor, and other days he has to find motivation.

"It's an everyday thing," he said. "You have good and bad days, and you have to do your best to overcome it. Breaking is how I do that."