Midtown marvel celebrates a quarter-century of serving fish, chops and one of Tucson’s best burgers 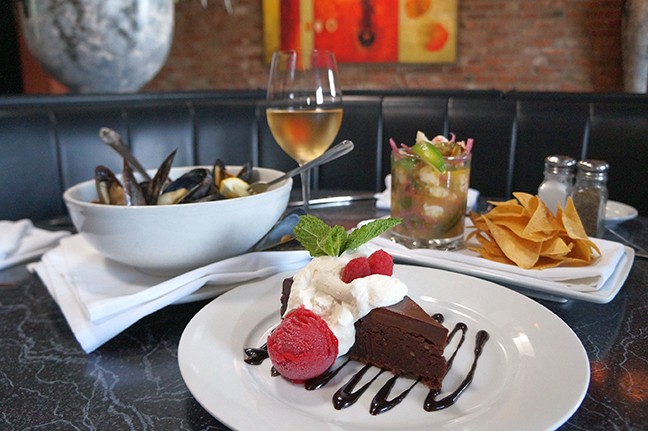 Jeff and Murph humorously squabble like an old married couple.

It makes sense. The two have worked in the close confines of busy Tucson kitchens together since the '80s. They've developed an almost cheeky banter often interjected with laughter. But when customers arrive and orders start to pour in, Jeff and Murph return to being who they are: good friends with a healthy competitive side who know they've got each other's backs.

Jeff Azersky and Jim "Murph" Murphy own and operate the midtown splendor that is Kingfisher, one of the fishy jewels in our culinary crown. Kingfisher is celebrating 25 years of being in business in a city far from the seas and lakes where much of their menu is harvested. The restaurant opened at a time when residents might have been hesitant to patronize a land-locked fish joint, but they were confident the food would hook patrons.

After moving around a bit, getting married and studying at the Culinary Institute of America, Murph returned to Tucson around 1993, knowing he wanted to open a seafood restaurant of his own

"That's when I partnered with Jeff and our friends John Burke and Tim Ivankovich," he says. "I still had lots of contacts at Jerome's and that's where our seafood supply originally came from."

Azersky, hailing from Boston, came to Tucson in 1986 and became executive chef at the now-closed Café Terra Cotta. After Café Terra Cotta, which served upscale Southwestern fare, Jeff weaved through various kitchens that specialized in Italian and French cuisine, opening up his reach as a chef to all varieties of regional fare. So, when the opportunity arrived to own a neighborhood seafood place, Azersky was ready for the challenge.

What Azersky was most excited about was being the first restaurant in Tucson to serve varietal oysters. Thehe summer of '93, he went to Seattle on a part vacation, part business trip to make deals with oyster farms. Some in Oregon as well.

"Currently, we are getting supply from Honolulu as well and all I can say is: It doesn't get any fresher than that," Akersky says.

Serving great food and real drinks till all hours might have brought in some business, but it was the word of mouth that helped shape Kingfisher into the beautiful dining destination it is today.

"In the '90s, Grant Road was a dead zone and everyone thought we would fail horribly," Azersky says. "We get people coming in here all the time that have lived in Tucson their whole lives saying they've never been here, mainly because they think we were some kind of dive bar. So it's really nice to exceed their expectations."

Although the upcoming major widening project will be challenging to any business in the corridor, Grant Road is far from being a "dead zone" these days, what with various restaurants now surrounding the venerable Kingfisher, including a very large and very busy Fox Restaurant operation opening across the street.

"We get a lot of overflow from the place across the street," Murph says. "It's just a different vibe between us. There, they might have to deal with an hour or two wait and a lot of noise. Here it might take a few minutes to get them a table, depending on the night."

Azersky says he's excited to see the dynamic changes in Tucson's culinary scene, but expects Kingfisher to survive any challenges.

"We have no plans of going anywhere," he says. "We have staff that have been with us for over 20 years and seeing kids that came in here now bringing their kids in is just amazing. We just can't thank you enough, Tucson!"