Enriched by the next-door market, Caravan Grill is an oasis of Mediterranean food 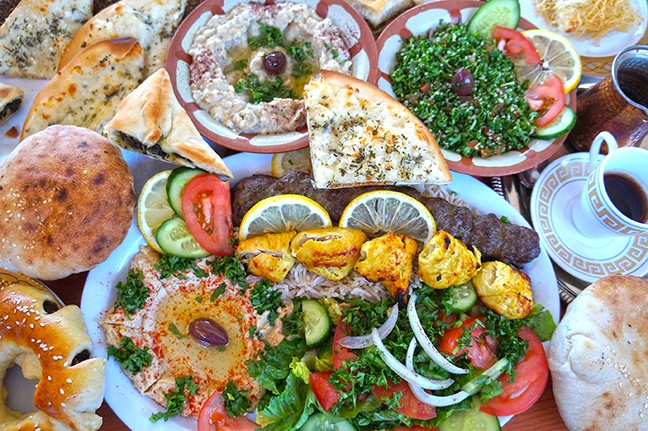 After moving to Tucson from San Francisco back in 2006, I was very happy and even relieved to have a local business such as the Caravan Market just a few blocks away from me. For some reason I thought Tucson was nothing but dusty trails and chuck wagon steak houses, but, thankfully, that initial impression was squashed, quickly, due to places such as Caravan. It didn't take long for me to become a regular due to their selection of meats, cheeses, teas, frozen items and spices.

After a lackluster taco joint next door shut down, Za'atar moved in and I was thrilled to have a nearby Halal bakery and restaurant. I thought the good folks at Caravan owned it. Nope. Completely different owners. A couple years pass and Za'atar relocates a few blocks away on Country Club past Grant. I thought a donut shop or pizzeria might take its place because of the oven that was on hand, but I couldn't express my excitement when I saw the sign saying Caravan Grill was being installed.

The Caravan Market owners have finally expanded to a Mediterranean restaurant. When it opened earlier this year, I was a little shocked to see that the layout was pretty much the same, although a bit sleeker. There are different faces running the line, register and bakery. One of them was the tall and bearded Anes Solieman, who was orchestrating opening-week chaos with the aplomb of a musical theater director delegating actors, musicians, set builders and last-minute costume changes. But everyone seemed happy, especially the customers who were eating in blissed silence among the throng of orders barked in various Arabic voices.

"I was actually living in Phoenix when I got the call from my dad saying that the restaurant was about to open," Solieman said during a rare moment of calm. "I just needed a break from home and family, just trying to figure things out for myself. This is my first time working in a restaurant and, to be honest, I'm a little nervous."

Not that it shows in Solieman's voice or demeanor. But it's a lot of work to run a busy restaurant, and you don't get many days off. He does it with the help of his family's good business sense and strong work ethic—and it doesn't hurt that the food is great. His dad, Khalifa, is committed to serving authentic Halal food, while his mom, Nagat, does the cooking.

About halfway through my lamb shawarma ($7.99) I knew I had discovered yet another dish to contribute to my growing waistline. It was wrapped divinity with help from house-baked taboon (pita) bread and a very tangy tzatziki. Nagat may not be a chef by any certification but her recipes and technique from decades of trial and improvement flawlessly shine in the traditional dishes Caravan Grill delivers.

For those uninitiated in the delights of Mediterranean food, it might be wise to start with the chicken shawarma plate ($8.49) and take it from there. Once you understand and appreciate the freshness of the ingredients, the subtlety of the spices and the diligence it takes to make something so seemingly simple something so obsession worthy, you can move into the realm of lemon and yogurt marinated chicken shish tawook ($5.99) or the kofta kebab ($6.99), an affable mix of lamb, beef and veal.

Outside of meat-focused plates, various salads and appetizers such as baba ganoush ($3.99 for a small, $4.99 for a large), Caravan Grill also bakes items such as baklava, spinach and cheese pies, walnut kataifi (kind of similar to baklava), pistachio filled burma (like a crunchy dough bowl of sorts) and Arabic bread, along with brewing strong Turkish coffee delivered in little copper carafes. This is the best way to end a near-perfect meal or just hang out and chat with friends on a random afternoon for hours on end.

The Caravan Market has been open for more than 30 years and with the help of son and manager Solieman, along with a newly found dedicated following (including me), hopefully the Caravan Grill will endure just as long.