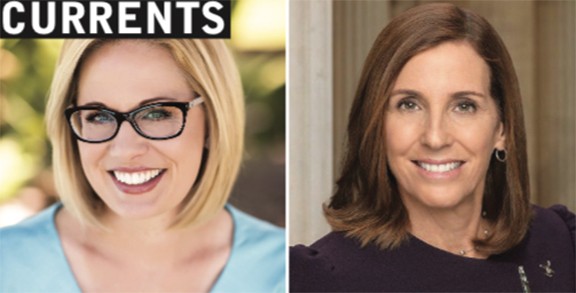 Courtesy photo
Although the House of Representatives passed the SAFE Act to require paper ballots and other election-security measures in June, neither Republican Sen. Martha McSally nor Democratic Sen. Kyrsten Sinema have said they support the legislation.
The midmorning sun was already beating down on a handful of people outside the state government's downtown headquarters last Tuesday, Sept. 17, as they held up homemade signs to face the thoroughfare's bustling traffic. "Secure Our Vote, Protect Our Democracy," they read.

Punctuated by honks of support from cars passing through the intersection of Congress Street and Granada Avenue, individuals took to a makeshift podium on the street corner to speak about why they believe it's imperative that the federal government invest in voting machine security and ensure that every vote in the 2020 election is counted and properly audited.

"I am very alarmed that foreign adversaries are hacking into our voting systems," said Sarah Leech, an organizer of the "Secure Our Vote" demonstration, which was part of a national day of action that occurred in 40 cities across 28 states. "The entire national security community agrees that Russia was in our voting system, and is poised to interfere in the 2020 election. This is real. It is a serious matter. We need to do something about it."

The demonstrations—and similar calls for better election security—appear to have had an impact on Senate Majority Leader Mitch McConnell. After having spent months ignoring calls for additional funding to safeguard election machinery, McConnell switched positions on the issue as he praised the Senate Appropriations Committee for adding $250 million for election security grants to a spending bill.

Earlier this year, the U.S. Senate Intelligence Committee reported that from 2014 to 2017 "cyber actors" affiliated with the Russian government conducted an "unprecedented level of activity" against states' voter registration databases, voting machines and other systems that manage and display election results.

They found that the most widespread Russian activity during this time was "scanning for vulnerabilities." The committee stated there was no evidence that any votes were actually changed or that any voting machines were manipulated, but said they had "limited" insight to the truth.

Tom Ryan, the former chair of the Pima County Election Integrity Commission, is particularly critical of touch-screen machines that don't involve a paper ballot filled out by a voter. He pointed to a handful of states that reported problems with their voting machines during the 2018 midterm elections. Users would select a candidate on the screen, only to see it flip automatically to another candidate.

A 2018 study from the Center for American Progress found attempts were made to hack election data in all 50 states. In four of those states, including Arizona, foreign hackers were able to modify voter registration data. They also targeted one of the largest voting machine vendors in the country, Election Systems & Software.

ES&S President and CEO Tom Burt published a statement in June calling on Congress to mandate paper ballots in all 50 states, following the company's own decision to eliminate their paperless voting machines as a primary device for their customers.

"There is a clear need for the establishment of standards for machine penetration testing," Burt wrote. "That's what is missing and what needs to change."

In 13 states, paperless voting machines are still used in some jurisdictions. In five states, that's all they use.

"Since I started looking at these issues, 15 years ago, it never ceases to amaze me that elections are poorly audited, if they're audited at all," Ryan said.

Most states do not fully audit their ballots. There are some states, like Arizona, that do a random sample test. But only three states have passed legislation mandating a "rigorous, statistical audit," that would detect a high percentage of errors or attacks, according to Ryan.

Demonstrators believe these shortcomings in voting systems can sow doubt in the minds of American voters. Lisa Sanchez, an assistant professor at the University of Arizona's School of Government and Public Policy, says maintaining voter confidence—the belief that ballots are counted as cast—is the most important aspect of our electoral system.

"That's what makes democracy run, in general," she said at the demonstration. "If that's not occurring, then democracy falls apart immediately."

The Senate Intelligence Committee wrote in their report that during the 2016 election cycle, local, state and federal officials debated whether to publicly acknowledge the foreign activity in states' voting systems. They wrote some were "deeply concerned that public warnings might promote the very impression they were trying to dispel—that the voting systems were insecure."

The report declares Russia was developing capabilities to "interfere and undermine confidence in the U.S. democratic system and voting process." Sanchez points out that those whose confidence is undermined most often supported a losing candidate in an election.

"Winners never really have a regret, they feel like the system worked as it should have," she said. "But we know that those who support the losing candidate feel that they were in the majority and therefore, maybe something went awry."

The local election-security advocates called for three things last week: every voter should mark a paper ballot; a manual post-election audit should be conducted to detect false outcomes; and voter databases should be backed up offline and secured. They want all poll workers trained to ensure that voters can cast their ballots, even in cases of a hack, malfunction or error.

These measures are the core of the federal SAFE Act (H.R. 2722), which was passed by the House of Representatives in June. The bill requires all voting systems use "individual, durable, voter-verified paper ballots"; meet specified cybersecurity requirements, including a prohibition of connecting voting systems to the internet; and individuals with disabilities be given equivalent opportunities to cast a secure vote. After federal elections, the states must carry out a federally-funded, "risk-limiting" audit.

To help with the cost of updating voter equipment and other election expenses, the House also passed H.R. 3351, a spending bill that allocates $600 million to election security grants, dispersed through the federal government's Election Assistance Commission.

Last year, Congress agreed to provide $380 million for election security efforts. Republicans have pointed to that as reason to not allocate any more money this year, but election-security activists believe that amount is inadequate.

"The states do not have the money to upgrade their equipment," Ryan said. "The Senate is dragging its heels, refusing to bring the SAFE Act to a vote."

Here in Arizona, Ryan says voters can be confident their ballot will be counted because virtually all votes have a paper trail.

Because there is no centralized voting system in America, each state has a lot of freedom regarding how they conduct their elections. While their congressional delegates battle it out in Washington, D.C., some states have already taken election security into their own hands.

In 2017, Virginia switched from their previous paperless voting system to paper ballots, Colorado became the first state to mandate "risk-limiting" post-election audits on all ballots and Rhode Island followed their lead, according to a report from the Center for American Progress on election security.

State officials in New York, Florida, Pennsylvania and more have spearheaded initiatives in line with these goals.

Billy Kovacs, outreach director for Representative Ann Kirkpatrick (D-Arizona), came to the demonstration to deliver a message on behalf of the congresswoman, who was in Washington, D.C.

He read: "In 2016, our country was attacked. Not by a standing army, but by a coordinated cyber attack by the Russian government that sought to sow division, undermine our democracy and influence our elections. National security shouldn't be a partisan issue. And make no mistake, election security is national security."

Kirpatrick joined 223 other Democrats and one Republican in the House to approve the SAFE Act. Since then, the pressure has been mounting on Senate Majority Leader Mitch McConnell (R-Kentucky) and his fellow Republicans to allow the bill to go for a vote.

"To the Trump administration: If you stand idly by and do nothing to thwart interference in our elections, then you are complicit in the actions of those who seek to do harm to our way of life and our country," Kovacs said on behalf of Kirkpatrick.

Senator Martha McSally (R-Arizona) “believes strongly in the importance of election security and the need to punish those who seek to interfere in our elections,” according to her staff.

McSally co-sponsored the DETER Act, which would require that sanctions be imposed on those who “illicitly meddle in U.S. elections.”

While she supported the $380 million for election security last year, it is unclear whether McSally will support continued efforts, such as the SAFE Act, to beef up security within the U.S.

Her counterpart, Senator Kyrsten Sinema (D-Arizona), has said in media interviews that she supports the findings of the Senate Intelligence Committee. Her spokesperson, Hannah Hurley, says Sinema "remains concerned that Russia and other bad actors will continue to attempt to use propaganda and misinformation to influence future elections."

Sinema is a cosponsor of the "For the People Act of 2019," which does require paper ballots and provides grants for states to secure their voting systems, among other initiatives. Hurley did not specify whether Sinema would support the SAFE Act.

Leech and the other demonstrators urged Tucsonans to contact Sinema, McSally and other elected representatives in D.C. to urge them to pass election-security measures.

"I want my Libertarian friend, and my progressive wacko neighbor, and my moderate cousins, and my friends down the street who are political Independents, and my neighbor who is a Republican—I want their votes to count, just like I want my moderate vote to count," Leech said. "Every person's vote should be secured."