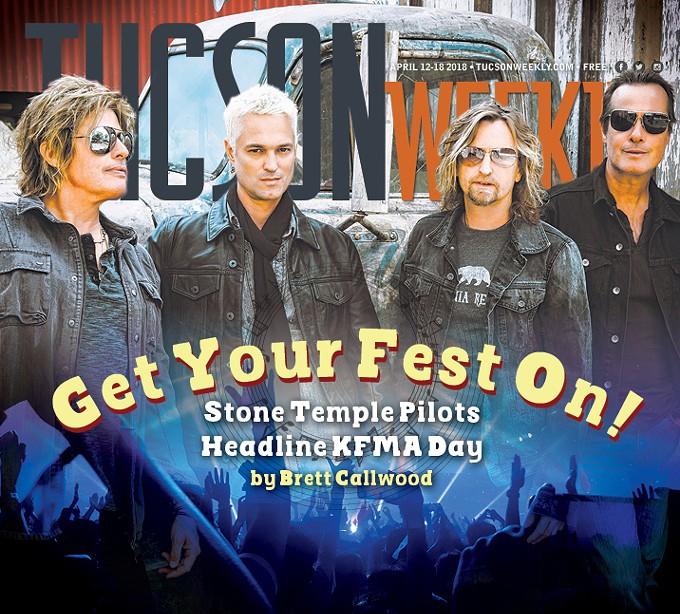 Jeff Gutt is living a surreal dream right now. The guy was officially unveiled as the vocalist with Californian alt-rock band the Stone Temple Pilots at the tail end of last year with a big "reveal" show at the Troubadour in Hollywood, and that has been swiftly followed by a new STP self-titled album. It's a sweet gig for a long-time fan, who now gets to tour the world and perform to a legion of adoring fans, singing songs that he loves and playing with musicians that he admires immensely.

The yin to that attractive yang is that STP fans are dedicated. They love the band and they really, understandably, adore Scott Weiland, the charismatic, troubled singer who died in December 2015. The Weiland-lead STP recorded some of the more memorable tunes of the grunge era, and his shoes are impossible to really fill.

Linkin Park's Chester Bennington tried, temporarily. When Bennington died in July of last year, it was yet another emotional blow to a band that, honestly, appeared cursed. This was a ship that needed steadying, while the remaining band members deserved some joy. Enter Gutt, an amiable, grounded Michigander who still can't quite believe where he is.

That the situation is surreal to Gutt is understandable; he's been a fan of STP since the 1992 Core debut. Gutt had been playing guitar in various bands while in school, but he heard Core for the first time just as he was making the decision to switch his focus from guitar to vocals. As a result, the impact of Scott Weiland was enormous.

"Scott had a big effect on me in the manner that he always used his influences to cater to each song," Gutt says. "That was something I was really involved in at the time—just trying to emulate the people that I loved. From Gordon Lightfoot to John Denver to The Carpenters, to anything else. There were many things that I listened to and loved. I wanted to pick certain things and put those into my repertoire. Scott came along and Core came out, and it blew me away because he was just doing what I was doing. This guy caters to every single song. Here he sounds like Bowie or Iggy or Morrison, but it was still him. That was a thing that I took from all that. It had a huge influence on me."

Gutt says that the highlight of his stint with STP so far has been seeing the happiness on the faces of his bandmates. He knows as well as anyone how much these guys (guitarist Dean DeLeo, bassist Robert DeLeo and drummer Eric Kretz) have been through. After all, it's not as if all was rosy between that trio and Weiland before his death. There must have been plenty to come to terms with, and that's before Bennington's death. In addition, the fans have had to come to terms with it all too. It makes sense that there are still plenty of naysayers—fans who were unhappy about Bennington being in this band, way before Gutt joined.

"Being such a huge fan of Scott and STP, I'm one of those people," Gutt says. "So that actually helped me when I was putting all the ingredients in for the record and how to even approach something like this. Because I would have been one of those people with his arms crossed at the back of the room going, 'No, no, no.' That really helped me. I completely understand where those people are coming from. At the end of the day, we make music but it belongs to the people. So they feel that's theirs and it's hard to accept someone new coming into that role. Over time, we'll get there."

STP made the slightly odd decision to self-title the first album featuring Gutt on vocals. This is odd only because the previous album (besides the High Rise EP with Bennington) was also self-titled. That adds a bit of confusion to matters, though the desire to make a fresh start is understandable, as was the desire to get it out as soon as possible after Gutt joined.

"It was part of the audition process—going in the studio to see how I could write and form a song," Gutt says. "I let the music speak to me, and I believe I did melodies for six songs on that first day, without lyrics. Some of the sounds I made became some of the lyrics. I tend to go with the vowel sounds, and come up with the words afterwards. There was a lot of mumbling. I got the melodies, and some of those melodies are still on the record. I don't know if that's a grunge thing, I've just always done that. Even when I was 6, sat with a guitar, I'd make up melodies. I figure, you can love a song that's in a different language, you don't need to know what the words are. As long as the melody's beautiful and it all goes together."

Gutt feels like he's in a good place, and little wonder. He's fronting one of his favorite bands, getting to sing some of his favorite songs every night (his current fave tune to perform is "Glide" from the No.4 album), and he gets to play towns on tour that he's never even been to before. Tucson is one such place. He's excited to debut here, and he's promising a killer set.

"We have a few different set lists that we flip between, and we've been changing them up," Gutt says. "It's a good 20 songs, so there's a lot to choose from if you're an STP fan. There's a lot of deep cuts, a lot of hits, of course. We try to balance it out. There are a lot of songs that these guys have recorded that they've never played, so we're trying to get to some of those. Just try to give the fans and the band the best experience possible."

After that show, 2018 is all about more touring for Gutt and the Stone Temple Pilots.

"I'm just looking forward to getting out on the road and visiting all these places I've never been," he says. "Seeing the world, as a member of Stone Temple Pilots, which even saying it is a little strange but hopefully I'll get used to that someday."

Summer is starting a little earlier in Tucson as the waves of heavy metal and hard rock turn up the heat. In attendance will be both some of the biggest names in modern rock, as well as some up-and-coming stars. Plus, local band Sorrows Ruin, which recently won KFMA's Battle of the Bands at The Rock, will be onstage. Come on out and try your best to withstand the sonic fury.

Much more than just an offshoot or side project, A Perfect Circle has always been a oft-overlooked supergroup with ties to some of the biggest hard rock bands of the last few decades: Tool, Nine Inch Nails, Primus, The Smashing Pumpkins, Queens of the Stone Age, etc. They take their dark, melancholic alt-rock and fuse them with virtuosic melodies in metal. And wouldn't you know it, their first album in 14 years is coming less than a week after this show.

The vocalist for Korn—that's really all that needs to be said. Few people can say they started an entirely new direction for music, but Davis and his band did it with nu metal. When it's not angry, it's groovy; when it's not jarring, it's funny. But often times it's all of those at once. Just about any hard rock hit you heard on the radio in the late '90s or early 2000s has Jonathan Davis' influence all over it.

Sludgy death metal for a post-apocalyptic world. While their Mad Max personas are heavy and dark, their music can also be surprisingly groovy and uplifting. Congratulations to these guys for winning the recent Battle of the Bands at The Rock! They've won the honor of opening up the entire festival and sharing the stage with some of the biggest names in modern rock.

A newcomer to the game, Two Feet (the solo project of Zachary Dess) has recently blown up with his chill, nocturnal R&B, electronically fused, well produced and oh-so-honest. Equal parts intimate and repressed, and about as contemporary as it gets. His music is perfectly fitting for the grey-scale New York skyline that he calls his home.

Ten Years was one of the many bands caught up in the roiling waters of post-grunge and hard rock around the turn of the millennium. The way they play with tension and anxiety in their instrumentation makes their often catchy and mellow vocals all the more entrancing. You might remember their smash hit "Wasteland" or you might just remember rocking out.

Just as the name may or may not entail, listening to Vista Kicks is like chilling out over a nice view and just kicking back. Their choruses are infectious, their guitars are surfy, and their drums punch right through and make you groove. Taking cues from such huge names as AC/DC, The Beatles, Black Sabbath, The Bee Gees and Michael Jackson, they combine rock 'n' roll aggression with just enough pop to get you shaking.