What Randy did on his late-summer vacation

I've been away for a few weeks, so I'm not going to pretend that I know what's going on around here. But I heard rumors that the UA's best women's basketball player died, the Picurro guy is allegedly a pedophile, and Tweedledum beat Tweedledee in the City Council primary. I'm refusing to believe any of these horrific things and will carry on as if nothing of the sort has occurred.

Our grandstander-in-chief has urged us to conserve gas, so of course while I was away, I did the exact opposite, driving from here to eternity and back for some quality time with various familial factions and some eco-fun along the way. My tenacious little Honda ("Ramona") covered the 6,435 miles at an average of 36.33 miles per gallon (actually, 72.66 per person, counting the girlfriend/co-pilot). This probably means that we executed our trip with a net energy savings over the option of a series of half-empty jets operated by bankrupt airlines that find it necessary to chemically swab your duodenum for WMD residue before letting you climb aboard.

We certainly posted a net financial savings, despite the highest gas prices ever. (Translation: "despite cravenly opportunistic gouging by oil companies," with the worst of it right here in Arizona.) It would've cost us three times as much to fly zigzags around the East and accomplish our objectives.

As much as I hated to slip $500 into bulging corporate pockets ("Is that a quarterly profit, or are you just glad to see me?"), we mitigated our guilt by buying as much gas as possible from Citgo, which is wholly owned by the Venezuelan state oil company. If only there were a little button on the pump to earmark it directly to "Hugo Chavez' Bolivarian Revolution." But alas, most of my sawbucks were probably skimmed off by greedy middlemen and scumbag energy traders. Pinche capitalismo.

But accomplish our objectives we did, despite gas prices, hurricane-quantity rainfalls, defective wipers, toxic spills and endless construction. After visiting my home state of Ohio ("The Construction State"), I must once again caution Tucsonans against complaining about roadwork. The state color in Ohio is "construction orange." The moment you cross the state line and see the brilliant barrels stretching into infinity, you know you're home. It's a weird synergy of shitty weather, inept and/or corrupt bureaucracy, and a mafia-controlled construction industry. The result is an impressive contradiction of the most roadwork and worst roads in the nation.

And I mustn't omit the toxic spill. We stopped in Cleveland (yeah, I admit it--I grew up there) on the way to upstate New York, and as we hit the highway just before dawn in a blinding rain, we were suddenly presented with a cockpit full of chemical fumes of unknown origin and character. Through the windshield, we could dimly see a large, dark mass ahead. Perhaps some chemical truck took a dump on us. We'll probably never know. All we have are memories of a day-long headache and the huge pile of quarters it took to blast the residue off Ramona's fading paint. Good ol' Cleveland.

Then there was the cooler leak and the water-jug leak, which conspired to soggify my clothes before I had the chance to take them out of the car and soggify them in a more useful and enjoyable way. I was reduced to hanging them up in a motel room in the Adirondacks and pointing a fan at them, the better to move the 100 percent humidified air around, and at the same time make the room smell like a sour, decaying woodchuck.

Ah, but the objectives. Yes, well, the fam's the same--some marryin', some divorcin', some breedin', some dyin'. Made a couple great canoe trips, which test the bounds and cooperation skills of any relationship.

Right! Paddle right! Stop telling me what to do! You're trying to control everything! I thought I was supposed to be steering--I have to control things at least a little, don't I?

The one thing I learned about steering a canoe is that it's important to read your partner. When she turns around and glares at you, and you can see demonic red lights behind her sunglasses where her eyes should be, it means that she's about to shove the paddle right up your ass.

Ah, Tucson. The dust. The heat. The dryness. It's great to be back.

Tucson Tourism; What to Do with Your Wanderlust 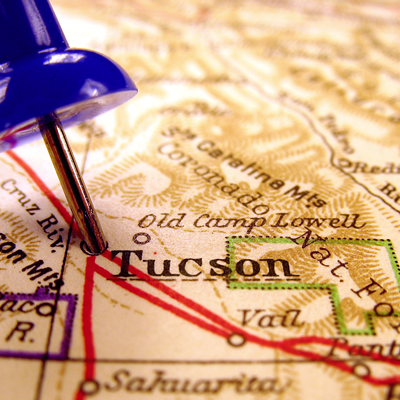