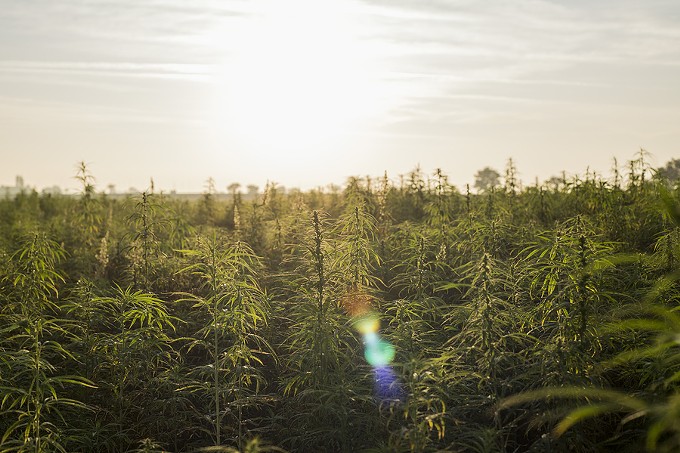 Bigstock
The 2018 Farm Bill legalized production of industrial hemp and some early birds were waiting to jump on that opportunity.

It was May of this year that Gov. Doug Ducey waved his magic signing pen and authorized the Arizona Department of Agriculture to approve qualified applicants to grow and process industrial hemp.

In June, the big dog on the porch set up shop and Integrated CBD LLC in Scottsdale instantly became the largest hemp operation in the state when they planted the first hemp seeds in Arizona since Prohibition.

"Hemp is no longer a small greenhouse operation, but an estimated $24 billion market," said Jeff Dreyer, co-founder and COO of Integrated, a pharma-grade manufacturer and custom formulator of hemp-derived CBD products.

"We're trying to do things the right way with all land and processes certified as organic," according to Patrick Horsman, president and CEO of what quickly became one of the largest organic hemp farms in the country.

Working with $78 million in debt and equity raised since January of this year—"We've got some great investors backing us"—Integrated is occupying a 155,000-square-foot production facility in Phoenix that, when completed, will represent the largest throughput CBD oil extraction plant in the United States, producing well over 100,000 pounds of biomass daily.

That's in addition to the 10,000 acres of drip irrigated farmland in Yuma that is already growing crop. "We planted our first seeds in June on 1,240 acres and are currently harvesting that initial planting," said Horsman. "About a third of the field has been harvested and the remainder should be done in a couple of weeks. It's been tested by the state and none of the crop was hot, so we did a good job of managing cannabinoid levels.

"We're about halfway through our second planting, an additional 1,800 acres to be harvested in December and January. We anticipate about three crop rotations per year will be optimal."

A large scale drying facility is nearing completion to dry some 100,000 pounds of hemp per day.

"We have a dozen different strains," he said. "Some are photosensitive that you plant in the spring to be harvested about now as the days get shorter and plants cease flowering. The planting we're doing now is a non-photo-sensitive crop that takes about 75 days or so before it flowers and is ready to harvest. So we'll grow the autoflowering crop in the spring and fall shoulder seasons and run some eight-nine months of photosensitive crop that is generally larger and produces greater yield."

Horsman, a self-described entrepreneur and former Wall Street hedge fund manager, said it was too early to discuss further expansion. "Ten thousand acres is a lot of production, so we'll get through that first, but as market demand increases, we have the ability to add more land and replicate the extraction plant."

Horsman calls the economic impact of his ground-breaking operation "great from a state tax revenue basis and the fact that we'll create some 200 new jobs in the field and production facility. We've spent time with the governor and he thinks it's a great thing for the state."

As to further expansion into California—perhaps not. "That's a much more difficult regulatory and taxation environment, so we prefer to consider any needed expansion possibilities in Arizona, a less expensive place for us to do business."

With more and more states electing to add medicinal and recreational marijuana options, will Integrated CBD play any part in the THC side of the industry?

"Probably not unless it were to become federally legal," Horsman said. "We're building our business to be both state and federally compliant and I think it's important for us to stay in our lane. Obviously, THC is really interesting, but until it becomes federally legal, it's something we'll probably stay away from."