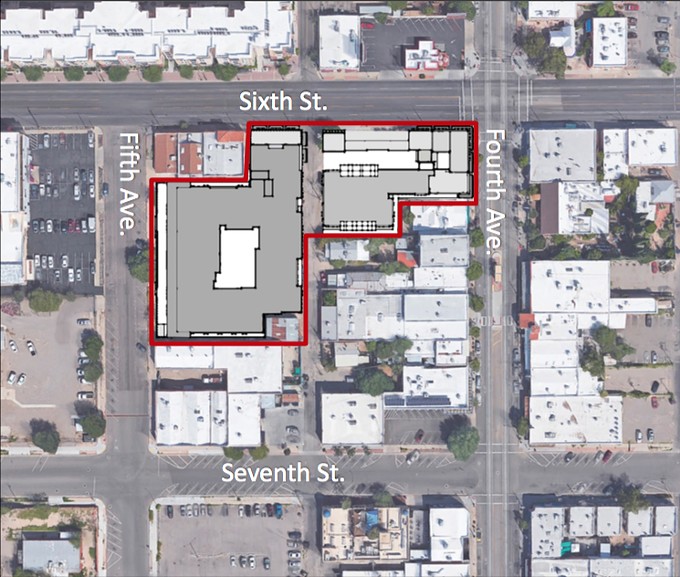 Courtesy photo
The development area is within the red line, with the exception of a historical home off the alley that will not be demolished.

Fourth Avenue's Flycatcher nightclub may be demolished this summer, with plans for new apartments and retail space.

The downtown hotspot is under contract with a student-housing development company out of Memphis, EdR. At a neighborhood meeting on Wednesday, Feb. 7, legal representatives for the company told local residents and business owners the seven-story project would not be student housing—an assertion that was met with skepticism from Tucson City Council Member Steve Kozachik.

"They are trying to thread the needle and rent these rooms in a way that makes it look like it's not student housing," Kozachik says. "They're not being upfront with people."

The area EdR has under contract stretches west from the corner of Fourth Avenue and Sixth Street all the way to Fifth Avenue. The Flycatcher parcel itself has development plans for three stories, with some two-story and five-story levels surrounding it. On the west side of the alley behind Flycatcher, there will be seven-story housing with a two-story section by Sixth Street, next to three historic storefronts on the corner of Sixth Avenue and Fifth Street that won't be demolished.

This development is in the Infill Incentive District, or IID, adopted to create more urban planning designs and offer development incentives and flexibility.

The seven-story section is in a zoning area of the IID called the Warehouse Triangle Area, which allows for buildings to be 160 feet, or 14 stories, according to EdR representative, Rory Juneman, an attorney with the Law Offices of Lazarus, Silvyn and Bangs, P.C.

EdR, who also owns the District on 5th, is a student-housing development company. But with this new development, they are avoiding the "group dwelling" designation, used for student housing, and coming with a greater scrutiny from mayor and council. By renting by the unit rather than by bed, EdR can use the designation "multifamily dwelling."

They are hoping for a groundbreaking sometime this summer, according to Juneman.

Kozachik says downtown needs more affordable housing, and the University of Arizona needs to build vertically in its own footprint, adding that students don't typically spend money on Fourth Avenue. Although the development shouldn't require council approval, they may need financial incentives, which Kozachik says he's not inclined to give.

"They're not an add to the area, other than aggravation," he says. "The aggravation of having more student housing is not something I want the neighbors to deal with."

But Juneman says this is not marketed to undergrads for a few reasons, mainly the fact that more than 50 percent of the 253 units will be studios and one-bedrooms, unlike EdR's other complexes, which are mainly four- to six-bedroom units. He says they'll have around 40 percent two-bedrooms and about 20 three-bedrooms.

While they can't bar undergrads from renting the apartments, he expects there'll be more grad students and young professionals interested in renting. There will be no rooftop amenities, but there will be terraces, including some that overhang Fourth Avenue and Sixth Street.

Juneman says they'll rent at the market rate and have one-year leases. With a tentative open of late 2019 or early 2020, the prices could change, but EdR foresees prices of $750 to $900 per studio. They haven't calculated one-, two- and three-bedroom prices yet.

There will be two levels of parking, with 190 parking spaces, only accessible from Fifth Avenue. Juneman says EdR plans on keeping some retail and will look for local retailers first, working with Fourth Avenue Merchants Association.

"We certainly want to make sure any new retail they bring in is local," says Merchants Association Executive Director Fred Ronstadt.

The announcement of this substantial change to Fourth Avenue comes on the heels of another proposal, which includes up to 14 stories of apartments, on the west side of Fourth Avenue, between Eight and Ninth streets, bordered by Stevens Avenue to the west.

It would mean tearing up Maloney's Tavern and replacing it with market-rate, multifamily apartments that would be no higher than 30 feet on Fourth Avenue, most likely one- or two-story storefront. It would rise in teirs, going back, to the possible 14 stories, the maximum height allowed under the Warehouse Triangle Area zoning.

The property owners, Partners on Fourth, worked with CDG Architects to submit a proposal to the city. It will see a public hearing with the zoning examiner on March 1, and from there will go for a vote of approval by mayor and council, most likely in mid-April, according to Tucson's Planning and Development Services.

No developer has taken on the project yet, so no particulars are set. Tom Warne, a representative for Partners on Fourth, says it's unlikely developers will build to the maximum height. They've held a number of neighborhood meetings and commissioned a traffic study to see how additional traffic would affect the surrounding neighborhoods.

Warne says they don't know what the units will cost to rent, but they will be market rate and marketed to millennials, young professionals and older people. He estimates there will be around 300 units. The project could get underway as early as 2019.

Kozachik is on board with this project, which he says will create more desirable, affordable housing and has a "fundamentally different" target audience. He says all you need to do is look at EdR's other housing projects to see they are unaffordable and undesirable to locals.

"A professional is not going to move into an otherwise student-housing project," he says. "EdR does student housing. That's what EdR does. They're wanting to take the position that young professionals are going to be moving in.... That just doesn't pass the smell test."