The Sea The Sea tours for their second album 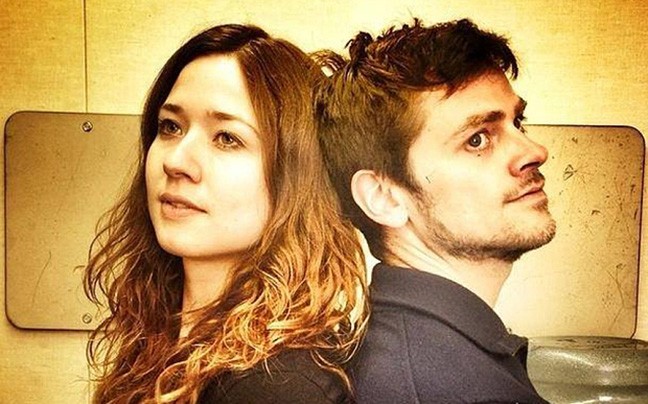 Courtesy
The Sea The Sea

The Sea The Sea

Mira Stanley and Chuck Costa met at a music festival. Now, just a few years later, they're touring across the country and performing songs of their own at music festivals. The couple are the predominant singer/songwriters of the folk pop band The Sea The Sea.

"Chuck and I are both songwriters," Stanley said. "The last album was one-third songs I wrote, one-third songs he wrote, and one-third we worked on together. But often we'll talk through ideas together and by the time we're done, every song feels like it was co-written."

The Sea The Sea are in the midst of a summer tour following the release of their second album, From The Light. In their debut album, the band consisted of only Stanley and Costa, and this lended itself to more intimate and acoustic songs. But with their newest release, the band is now a four-piece, and is creating much more symphonic and versatile songs.

"We evolved away from that stripped down, acoustic sound," Stanley said. "We were wanting to add more layers to our live show, and it's only gotten bigger. Now we're getting into rock show territory."

The summer tour began on June 1, with the release of their new album. Since then, The Sea The Sea traveled from their home state of New York, down the East Coast, and cut through the heartland, performing shows in Ohio, Illinois and Iowa. Part of the tour included performing at Blissfest, a Folk and Roots Music Festival.

"There's always a different energy at festivals." Stanley said. "Every show is a conversation with the audience, and that festival energy has really worked with us. Particularly with our newer sound."

Although on paper they could be described as uplifting and powerful folk pop, The Sea The Sea should not be pigeonholed in with other rustic folk revival bands like Mumford and Sons and The Lumineers. The versatility among their newest album, and even on individual tracks, makes them worth paying special attention to.

"We play in such a variety of spaces," Stanley said. "You sort of have to be versatile in your show. It's something we really enjoy doing."

The opening track of From The Light, "Everybody" is a bittersweet dirge with a progressing vocal melody on top of atmospheric synthesizers and theatrical drums. Stanley's vocals soar over the impressionistic guitar lines, crying for everyone and everything. But the very next track on the album, "Bang Bang Bang," is more electronically inspired, with danceable drums and shimmering, arpeggiated guitar.

"We're continually being inspired," Stanley said. "We're always moving toward something new. We're letting the music take us wherever it takes us. We don't want to limit ourselves to a specific genre or sound. Even when we started building our sound, we consciously tried to avoid going toward one specific thing."

The summer tour is mainly focusing on tracks from the new album, but even then, they're naturally evolving to fit the new surroundings and band dynamics.

"We're constantly out in the world, meeting new people and absorbing ideas," Stanley said. "But it can be difficult to write music while on the road. It's something we're trying to work on. When we get off tour we try to dive right in to making new music. It's almost an emotional release."

Although the band is only five years old, they already have two albums and an EP under their belt, and are showing clear signs of expansion, both musically and publically.

"I still feel like we have a long way to grow," Stanley said. "That's why we're so excited to be our touring and exploring the world."