Growing Concerns Want to start your own marijuana garden? It’s not as easy as it looks. 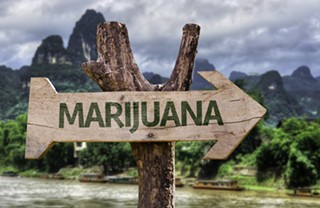 Arizonans past the age of 21 now have the right grow their own, but cannabis experts are skeptical there will be a sudden rush of Johnny Reeferseeds who will start gardens and wipe out the expanding marijuana industry.

With the passage of Prop 207 last November, those of age can now legally grow up to six plants individually or 12 to a household with two or more adults. Pot prohibitionists have warned that you won't be able to swing a dead skunk without hitting a stand of marijuana plants—or at least be inundated with the stinky odor of your neighbor's greenhouse—but those in the biz say it's not as easy as it looks.

"People were worried before that it's going to hurt the market and the industry," said Moe Asnani, owner of Tucson's Downtown and D2 dispensaries and co-founder of iLava, during a December webinar hosted by the Arizona Cannabis Chamber of Commerce. "I absolutely don't believe that idea. The best thing we did is giving home grow rights to people."

Among the barriers to growing your own are costs associated with starting your victory garden, the time involved and the skills necessary to grow consistent, high-quality pot.

Asnani is among those in the industry who believe those difficulties, combined with the ease of purchasing off the shelf, will keep all but the most dedicated and greenest of thumb pot aficionados in line at the local dispensary.

"I consider that like craft brewery, like a homebrewer," said Michael Ptack, a Scottsdale neuropathic doctor who specializes in cannabis. "There are sick people that don't have thousands of dollars for lights and securing the grow operation. ... I'm grateful that we have grow rights for medical and recreational consumers, but it is not effective in the course of a daily regimen for someone who's sick."

The law provides very strict parameters for cannabis grows. Cultivation must take place "within a closet, room, greenhouse or other enclosed area on the grounds of the residence, equipped with a lock or other security device that prevents access by minors," in an area "where the marijuana plants are not visible from public view without using binoculars, aircraft or other optical aids."

Along with those rules, there are other barriers: Home-growers could also face property rights issues for renters and insurance liabilities for homeowners due to the plant's federal status as a Schedule I narcotic.

Growers who don't own their property must get permission from the owner, and many homeowners associations are cracking down on what's happening outside the walls of the house.

"Major, large complexes will roll out guidelines to control and eliminate growing in their facilities," said Dustin Klein of Sun Valley Science in Phoenix. "Of course, medical still has rights—not to smoke out your neighbors, but for possession and consuming. We spend a lot of time reminding patients you have to respect your neighbors and neighbors' rights."

Gary Smith, from Guidant Law Firm, also in Phoenix, believes HOAs will not allow outside grows and will frown on any growing at all.

"If you read CC&Rs (Covenants, Conditions & Restriction) [they] will typically include provisions that speak to it not being permissible to engage in illegal activity, even in your own home," he said. "Now, does that mean that your HOA is going to come into your house and gripe about what you're doing indoors? I can't fathom that. ... But if you're going to cultivate, it has to be out of sight and has to be behind some sort of a locked enclosure."

According to Danielle Hernandez, director of the cannabis practice at the Gilbert Insurance Group, homeowner insurance may not cover damage associated with a cannabis grow.

"I think like anything else, there's going to be limitations added to policies as it goes forward," she said. "With regards to being able to cultivate in your home, there might be exclusions in your homeowner's policy if you happen to burn your house down because your lights are too hot. So if you're planning on doing anything like that, it would be advantageous to discuss it with your insurance agent, or at least review your policy and make sure that there's no exclusions based on how the insurance carrier views cultivating cannabis."

Even after jumping through the hoops to start a grow and successfully recreating your favorite strain of Girl Scout Cookie, it might be a good idea to have your crops tested to find out if there are any residual pesticides or heavy metals in the soil.

Barbara Dow, a founder and owner of Pure Labs, Arizona, said it would behoove the home grower to ensure the safety of their stash.

"Who knows what was in the ground before you put your cannabis plant there?" she posited. "The best way to know is put some cannabis or hemp in there: It sucks up everything and you'll know exactly what's in your soil."

Testing minimums are seven grams and in addition to soil contamination, the crop can also be tested for potency.

Ultimately, though, there will not likely be a huge effect on the MMJ market by home grows given the dynamics involved.

"When you pop in a seed and you start growing, you're probably gonna have to do it for a few years to get that perfect genetic, and to keep harvesting the way you want with consistent results," Asnani said. "But to do it from scratch and to expect top-quality product? It's a fool's errand. So that's why I'm saying everybody should try it. See if you like it. It may be a great hobby."