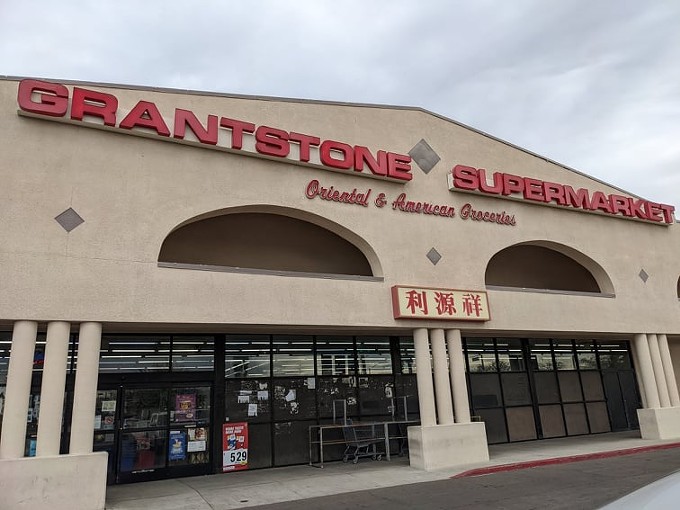 Like a lot of people, I started spending a lot more time in the kitchen during the 2020 COVID-19 lockdown.

Two of my greatest pleasures became cooking, one of the only activities I could really focus on, and grocery shopping, pretty much the only activity that involved me leaving the house (besides running or taking walks) for several months. I don’t want to blather on too much about my love of cooking, because I’m sure there have been plenty of essays in, like, the New York Times and Bon Appetit about the art of food and the magic of culinary spaces that say it much better than I ever could. But I will say this: In a time where my world felt too small and the problems of our planet felt too big, creating something new on a simmering stovetop became a way to experience small pieces of places beyond myself.

When restrictions began lifting, and as my bookmarked recipe folder started to expand, I began venturing outside of trusty Fry’s to smaller stores for more specialty ingredients. I got curry noodles and chili paste at Sandyi Oriental Market, for example. At Nur Import Market and Babylon Market, I’d find (and still find!) fresh dill and ginger, dried spices galore and ultra-specific items some recipes called for, like pomegranate molasses. I even found yeast at Nur Import Market during The Great Yeast Shortage of 2020.

This week, I made it over to Grant Stone Supermarket, which is something like an Asian Market +. I say Asian Market + because there are foods representing a wide range of places, from India and the Middle East to Mexico and the American South.

On one shelf, I see, in a row, a selection of cuernitos and cuchillos, a package 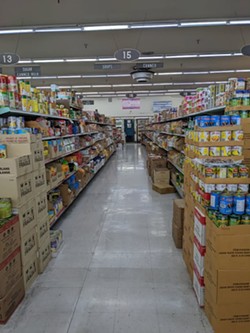 of Chinese rice cakes, and a few American delicacies:  Taco Bell Crunchy Shells and Hostess Donettes. Or there’s the aisle where the Korean tempura powder, the traditional Taiwanese “oyster omelet powder” and the Red Lobster cheddar biscuit mix are next to each other. A beautiful melting pot of cultures!

I have my eye out for a couple of cans of jackfruit, wanting to try to imitate Tumerico’s tacos (I love you, Tumerico), but other than that, I figure I’ll just wander around and see what strikes my fancy. There are several things that, while I’m sure they are nutritious and delicious, do not strike my fancy, such as an approximately gallon-sized tub of pork blood. I later learn it can be used to make pig blood curd, a high-iron Cantonese delicacy that looks like pink tofu.

(My mom texts me a few minutes later to see what I’m up to, and I tell her I’m checking out a new grocery store. “You can buy a bucket of pork blood here, fyi, in case you’re ever looking,” I tell her. She is not interested.)

I like to see the way people act in supermarkets. At Fry’s, there are the determined people, who blast down aisles with a sense of purpose that makes me envious. (They are so sure about which brand of salad dressing they want!) There are the moms carefully herding kids through the aisles, trying to simultaneously shop and keep their kid from noticing the sugar-filled snacks being marketed directly at child’s eye-level. There always seems to be a husband calling his wife to ask her what shape of pasta he’s supposed to get, or what brand of yogurt they usually buy.

At this store, there’s a similarly wide variety. I do see more than one elderly Asian woman, which makes me feel reassured about the authenticity of the place; if they trust the goods this place is selling, that’s good enough for me. There’s a middle-aged man who looks like the archetype of a dad: polo tucked into his jeans and phone clipped to his belt, holding up and comparing two different money trees. A mom tells her young son that it’s time to leave, only for him to scamper off, in his red backwards baseball cap and tie-dyed mask, shouting, “I gotta get a snack!”

I leave with two cans of jackfruit, a small jar of curry paste, a bunch of cilantro, and a container of miso. I also buy a tin of jasmine tea because I liked the way the tin looked and I have no self-control—or at least no regard for the 14 different kinds of tea we already have at home. I take that back, actually. I must have self-control. Because I didn’t buy the ladle the size of my face, or the beautiful, tiny container of something called amyl acetate, which apparently tastes sort of like essence of banana. Or anything from the cracker aisle, or the jar labeled  “lemon with salt and sugar” (“just add water!” the instructions explain). In an admirable show of restraint, I didn’t buy the dried black fungus or the fennel candy or the ground pomegranate. But there’s always next time.