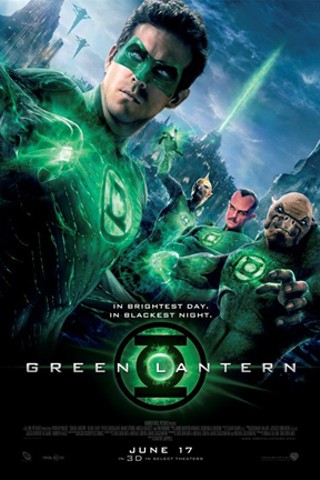 Ryan Reynolds works hard to make the ridiculous saga of Hal Jordan worth watching, but it’s to no avail. When Jordan, a hotshot test pilot, meets a dying purple alien, he receives a ring that transports him to another world, where he discovers he is the newest Green Lantern, protector of the universe. He then comes back to Earth, where he is more of a disaster-prevention guy than a superhero. His power is that the ring lets him create anything with his mind, which is just stupid. He could just create a world without crime and disaster with his mind, and his work would be done, right? While I think Reynolds would make a decent Batman or Superman, his Green Lantern is just silly and a waste of his likable onscreen persona.
By Bob Grimm

Green Lantern 3D is not showing in any theaters in the area.