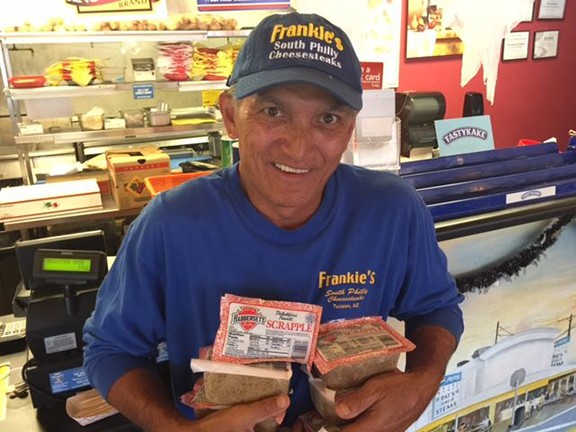 That was his trademark and high decibel greeting, often followed by his credentialed perspectives on the local food scene, which he would routinely leave on my voicemail.

Those were the words of Frankie Santos, Philadelphia native and longtime proprietor of Frankie's South Philly Cheesesteaks, 2574 N. Campbell Ave. And these are the words onto which I'll hold as the community mourns the loss of a great man.

I met Frankie many years ago when I was covering a local food story. After a short introductory call, we arranged to meet at his place after the day's lunch rush. I thought 3 p.m. would be the right time, during the common restaurant lull between lunch and dinner, so we booked it.

When I arrived for our meeting, I found myself at the back of a line that stretched from the counter to the front door. Some lull.

This unexpected delay turned out to be a gift, as I had time to anonymously observe the man in his element. Not a single person was there who he didn't personally greet, both upon their entry with a shout across the dining room and with a short story tableside once their meal was served. Even the act of wiping down a table was something that Frankie did with intent and pride. I could tell. I can see those kinds of things. And I saw a man who genuinely mattered to the customers of his heart-driven business.

What I encountered that afternoon nearly negated the need to sit with him in a more structured setting and ask him my prepared questions in full-on journalism mode. The story he told was through the life he lived, and I abandoned my reporting strategy well before I found myself at the front of the line placing my order. Cheesesteak. Whiz wit.

This introduction was the beginning of a relationship I would cherish for many years, both with Frankie and his bride, Deb. The two were regular fixtures at local culinary events and delighted in hauling those industrial flat top grills across town to serve up the flavors of South Philly to a hungry community. They also had a shared heart for charity, and whenever a nonprofit organization came looking for participants in a food event, they didn't know how to say "No."

At the day's end, Frankie enjoyed stepping out with Deb and their flock of friends, usually donning a vibrant sport coat with an appropriately flashy pocket square. They spent their money at locally owned restaurants. Frankie called them the "mom and pop" places that makes the culinary community so special, and he had scores of fellow moms and pops throughout Tucson.

Frankie and Deb retired a couple of years ago, sold the restaurant to a couple from Philadelphia, and relocated to Minnesota. That the restaurant wasn't put into the hands of a couple from outside the City of Brotherly Love's borders was encouraging, as was the new owners' decision to preserve the Frankie's name.

Frankie passed away last week after a battle with cancer, and while he lived his final years in the Midwest, Deb is planning an August memorial service in Tucson. I'll post information at OnTheMenuLive.com when I receive it. I sure hope the room will fit us all.

Contact Matt Russell, whose day job is CEO of Russell Public Communications, at mrussell@russellpublic.com. Russell is also the publisher of OnTheMenuLive.com, a regular contributor to "Tales of the Keg" on ESPN Tucson, KFFN 1490 AM & 104.9 FM, as well as the host of the Friday Weekend Watch segment on the "Buckmaster Show" on KVOI 1030 AM.