Where to pop your cork on New Year’s Eve

By Jeff Gardner and Emily Dieckman There were a lot of losses in 2018—from deaths (including pop culture icons like Stan Lee, politicians like John McCain, groundbreakers like Stephen Hawking and journalists like Jamal Khashoggi) to acres (a record-breaking nearly 1.9 million burned in California this year) to political control in the House of Representatives (sorry not sorry, Republican Party).

But hey, this year saw a lot of the good kind of surprises: the sort of things many of us never thought we'd see happen: They got the Golden State killer! Kendrick Lamar's DAMN. was the first non-jazz or classical work to win a Pulitzer Prize for music! Debra A. Haaland and Sharice Davids were the first two Native American women elected to Congress!

Right here in Tucson, our own columnist Brian Smith and his partner-in-crime and wife, Maggie Smith, shared stories about Tucsonans on the margins that highlighted their humanity. Speaking of humanity, OSIRIS-REx, the spacecraft on a UA-led mission to bring back some of the building blocks of life as we know it, arrived at its destination of Bennu just earlier this month. And, though this is nothing new for Tucson, there were countless concerts, festivals, artisan fairs and opportunities in general to eat, drink and be merry.

Who knows what 2019 will hold? All we can say with almost absolute certainty is that there will be some good, some bad, plenty of unexpected and a spike in the number of local gym memberships during January. Whatever your hopes, plans or resolutions are for the new year, let's all hope together that it's mostly good stuff.

Through The Decades Party at Congress. Hotel Congress is putting the cap on A LITERAL CENTURY of business with this bash from the past. Featuring music and decorations from the best decades since opening 100 years ago, Congress is hosting multiple parties all under one roof. We're talking multiple stages of live music, all-night dancing, photo booths, a Ferris wheel and more. Here's your chance to fully embrace the "born in the wrong generation" fact you've been touting to all your friends. And if you didn't know, Hotel Congress is also a hotel! So if you party too hard, you can sleep right then and there. 8 p.m. to 2 a.m. 311 East Congress Street. $35 early bird, $70 general admission, $140 VIP. hotelcongress.com. 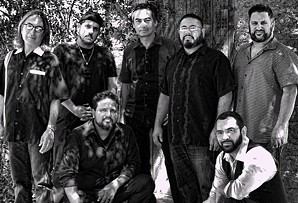 Zona Libre at Monsoon Nightclub. Monsoon Nightclub is definitely the kind of place you want to go if you're looking to party. As in, there are blue and black tiger print carpets on the floor, and a bar on each end of the club. And Zona Libre, with their hip hop arrangements of contemporary Latin music, make for a pretty perfect soundtrack. Let this seven-person band take you into our seventh year since the end of the world in 2012. 9 p.m. to 2 a.m. Monsoon Nightclub, 7350 S. Nogales Hwy. $25. 21+. ddcaz.com.

Quinn Dahle at Laff's Comedy Caffe. Like many comedians, Quinn Dahle is the type of comedian who makes you feel just a little bit better about your own life. He has a joke about inviting a woman back to his house after a date and asking her if she wanted to have sex. Her response? "I don't normally do this... But I'm going to pass." Ouch. Laugh your way through a night of fun, free-flowing champagne, prizes and giveaways as you watch Dahle—seen on The Tonight Show and Comedy Central—perform. The included dinner is your choice of sirloin tips in Marsala sauce, chicken Francaise or salmon filet. 7 p.m. Laff's Comedy Caffe, 2900 E. Broadway. $30 +tax and gratuity. 21+.  laffstucson.com 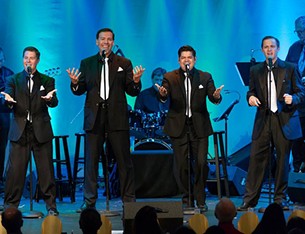 Valli Fever at Gaslight Music Hall. Frankie Valli may have worked with Four Seasons, but there's only one season you need to worry about: New Year's! Gaslight Music Hall is enlisting the help of oldies-singers The 4GENTS to celebrate the music of Frankie Valli & the Four Seasons. And better yet, this show is a matinee! So you can swing by for the daytime performance if you already have evening plans, or you can catch dinner and a show a little bit later. Either way, this will turn you into a dapper toe-tapper. 3 p.m. or 7 p.m. special show with dinner. $30 for the 3 p.m. show, $64.95 for the 7 p.m. show and meal. Book online at gaslightmusichall.com or call 529-1000. gaslightmusichall.com.

Masque of the Red Desert at Rialto. If you're looking to get energetic and enigmatic for New Year's, look no further than the Rialto Theatre's cumbia masquerade party. Featuring the rhythmic latin rock of XIXA and the beats of DJ Dirty Verbs, this evening is sure to keep you up well into next year. There will be party favors and dancing, and what kind of masquerade would it be if it didn't also feature a champagne toast? Doors open at 8 p.m. 318 E. Congress St. $10 or $50 VIP. All ages. rialtotheatre.com.

Opulence Queer Year's Eve at 191 Toole. For those feeling a little more adventurous (or outright queer), here's your opportunity to break in the New Year with the likes of: M0mmy1ssues, Atlantis Moreupset, DADDY SLMBR PRTY, Sissy Peniston, GO-GO Dancers and more. And although you can dress as fabulous and extravagantly as possible, you needn't break the bank. This event is only $5! Presented by Fluxx Productions. 9 p.m. to 2 a.m. 191 E. Toole Ave. $5. 21+. 191toole.com.

80's and Gentlemen at Casino del Sol. If you're looking to save money but also have a great time this New Year's, it doesn't get much cheaper than free, and it doesn't get much more fun than new wave. Multi-time "Best of Tucson" recipients 80's and Gentlemen are bringing their throwback party hits to Casino del Sol for a nostalgic bash. The Casino Del Sol Event Center can seat up to 2,000, so get ready for a big, neon time. 10 p.m. 5655 W Valencia Rd. Free. 21+. casinodelsol.com.

Rock On, 1912! New Year's Eve Party. Don't let the year fool you, this event is happening at 1912 Brewing. As a matter of fact, this event can take place in any year or decade from the past century you'd like! 1912 is allowing in any anachronistic attire. We're talking hot-pink legwarmers, bell-bottoms, the poofiest of hair, poodle skirts and more. They'll be upping the ante with karaoke, all-night drink specials and a complimentary champagne toast. And as an added bonus, this whole party wraps up before midnight! If you're looking to rock out to your favorite decade at a local brewery, this is the place to be, ya dig? 7 to 11 p.m. 2045 N. Forbes Blvd. Free.

Loews Ventana Canyon Resort New Year's Eve Party. With multiple room and brunch packages, Loews Ventana is the place to get extravagant for New Year's. A DJ will rock the Grand Ballroom, with a special balloon drop and a complimentary champagne toast at midnight. Packages include access to the party and a room for the night, and even brunch the following day to ward off the I-had-too-much-fun-last-night-what-an-awful-way-to-start-off-the-new-years blues. 9 p.m. to 1 a.m. 7000 N. Resort Drive. For full details, visit loewshotels.com/ventana-canyon.

The Labyrinth New Year's Eve Party and Masquerade Ball. We know what you're thinking: Why haven't you been kicking off every new year with a sing and quote-along edition of Labyrinth? Maybe that's why 2018, and all those other years, just weren't your year. Not to worry: Just head over to The Loft to watch David Bowie do his thing, and Jennifer Connelly learn that age-old "Be careful what you wish for" lesson. There's a costume contest before the show, pre-show Bowie music videos, a make-your-own mask table in case you forget your masquerade mask at home. Plus, lots of props and a free champagne toast at midnight. Event starts at 11, but movies start promptly at 11:45. Loft Cinema, 3233 E. Speedway Blvd. $15, or $12 for Loft members. loftcinema.org.

Monterey Court Celebration with Little House of Funk. What's better than ringing in the new year with a gourmet food menu, plenty of drink specials and the chance to dance the night away to some funk and blues music? How about getting to go to bed early? At this event, they're doing at East Coast toast at 10 p.m., so you can get in a full night of partying while still getting to bed early enough to start the new year off right. Call to make reservations at 207-2429. 7 to 11 p.m. Monterey Court Studio Galleries and Café, 505 W. Miracle Mile. $50, and $20 extra for early entry and the opportunity to order a la carte. More details at Monterey Court's Facebook page. 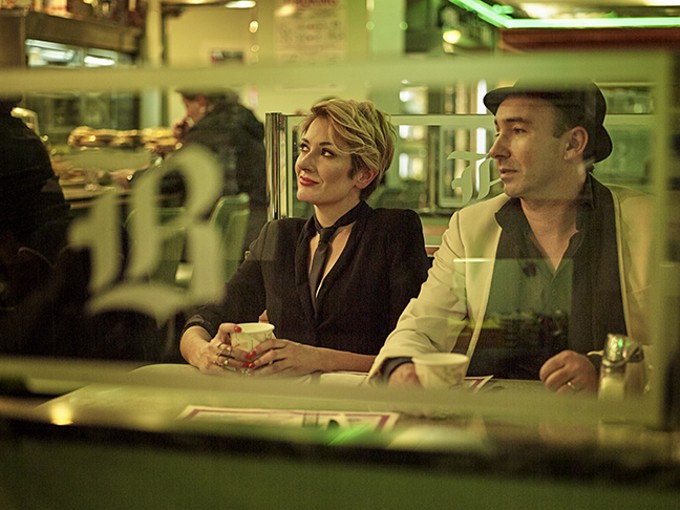 The Hot Sardines: French Fries & Champagne. The Hot Sardines' newest album (and return to the spotlight) is called French Fries & Champagne to highlight the band's duality: a rollicking, foot stomping, hot jazz band on the one hand, and smooth, orchestral ballad crooners on the other hand. And you know what? We bet a lot of people can relate to the trashy/classy French fries/champagne duality. Celebrate the different parts of you that make you you, and the different parts of music that make it special, with this show at The Fox. Lead singer Miz Elizabeth Bougerol sums it up: "These are uncertain times. When everything's hopeless, throw a party." 8:30 p.m. Fox Theatre, 17 W. Congress St. $49 to $99.

Espresso Art Cafe's NYE. If you just need a breather after all the holiday madness, stop by Espresso Art Cafe, where they're celebrating the new year in more low-key fashion. Drink specials start at 8 p.m., so you can get your partying done at a reasonable hour, and still have enough time to enjoy yourself. Not everyone's trying to have a major blow-out, and that's very cool. What better way to start a new year than to not be hungover? Espresso Art Cafe has your back. 8 p.m. to 2 a.m. 942 E. University Blvd. See Espresso Art's Facebook page for more details.

A Very Geeky New Year's Eve at Public Brewhouse. Quick, what's the name of the monstrous pit Boba Fett fell into in Star Wars? If you immediately knew the answer, well do we have a place for you this New Year's Eve! Head over to Public Brewhouse to enjoy some geeky pop culture quizzes with Geeks Who Drink and have a couple awesome craft beers while you're at it. Celebrate the new year and hone your obscure trivia muscles. (And for those of you who didn't know the answer, it's called the sarlacc pit, you uncultured fools.) 8 to 10 p.m. 209 N. Hoff Ave. See Public Brewhouse's Facebook page for more details.

New Year's Eve Dinner at The Coronet. If you're looking for your New Year's to be a little more classy and low-key, stop by The Coronet for dinner and music. And it ends before midnight! Naim Amor, Ben DeGain and Thøger Lund will play live music on the heated patio, and Chef Moody will cook up a "Prix Fixe" dinner. Food includes winter root vegetable pate, herb champagne braised chicken, rhubarb and charred carrot soup, candied citrus pot du, and plenty of wine to accompany it all. $70 or $95 with wine. 5 to 10 p.m. 402 E. 9th St. Reservations required, call or text 999-0931 to reserve your spot.