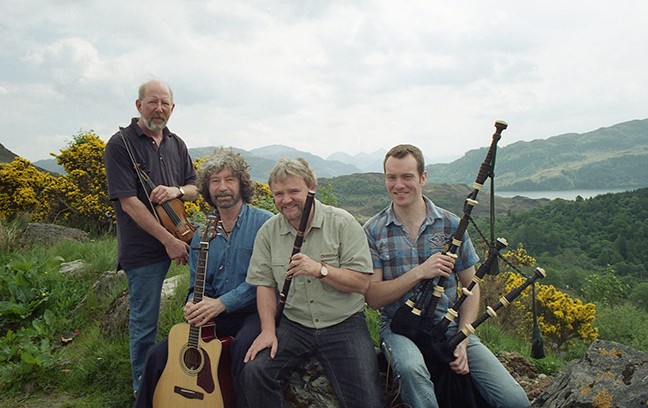 Courtesy
The Tannahill Weavers are coming to Tucson.

Orach is the old Scottish Gaelic word for "golden." It's also the name of the latest album by The Tannahill Weavers, a renowned traditional band that plays the airs and songs of Scotland. As it happens, the band itself is golden: Tannahill is celebrating its 50th year, its Orach anniversary.

The band's four musicians sail into Tucson Saturday night for a concert at Berger Peforming Arts Center, bringing along a raft of traditional instruments, from highland bagpipes to fiddle, to flute and bodhrán.. None of the four were original members, but the changing roster of musicians over the years have remained true to the Weavers' mission, winning admission to the Scottish Traditional Hall of Fame and garnering multiple awards.

Founded in Paisley, Scotland, the band takes its name from Robert Tannahill, an 18th-century Paisley poet, and from the weavers who once thronged Paisley's factories.

The Tucson gig is just one stop of a dizzying year-long anniversary tour that's already taken the band to the UK, Ireland and the U.S. After finishing the U.S. tour, they're off to the Netherlands, Germany and beyond.

The Weekly caught up with Roy Gullane, the band's guitarist, vocalist and resident comedian, last week via email. Here's a condensed version of what he had to say.

Do the band members still live in Paisley?

No, we're all scattered to the four winds now. The university city of Groningen, in the north of the Netherlands, is where I've called home since 1986.

Can you tell the story of how the band formed in 1968?

The embryonic Tannahill Weavers were a bunch of young guys who fell in love with traditional music back in the days of the "great folk scare" of the late '60s. Within six years we were playing all over the place.

I didn't actually join until 1970, so I've only been with the band for 48 of the 50 years, followed by Phil Smillie (flute, whistles, bodhrán, mandolin), who joined two years after me, John Martin (fiddle), who has only been with us for 30 years, and our new boy, Lorne MacDougall (bagpipes), who has graced us with his presence for a mere five years.

Do you perform only old songs or do you or also write new works shaped by the tradition?

Most of our repertoire is traditional but we all like to write in the traditional style. We're beginning to work from the perspective of there are only two types of song—good ones and bad ones.

Where do the old songs come from?

Music was always passed on through the generations. Before electricity, it was the only entertainment. Along came the radio and, suddenly, music could be played to the masses over the airwaves and the old traditions began to weaken. Then came television and the phonograph and a further erosion. Thankfully, a few good people decided to go out into the field and collect all the old songs and melodies before they totally disappeared. Now we can find them all in collections all over the world. Come the '60s, when we became more aware of our own traditional music again, there was somewhere to go find it.

Do you perform any songs in Scottish Gaelic? Or in Scots?

The short answer, concerning Gaelic, is no. None of us have it. I'm having enough trouble with Dutch, so I'll skip making any attempt at learning the ancient Celtic tongue. I do sing in Scots, the language of my grandparents. I don't have a problem with that.

Who plays on the anniversary CD?

We invited a host of friends and as many ex-band members as we could find. We managed to locate and record all of the surviving band members. The result is some very interesting arrangements and some truly wonderful performances.

One song on Orach is a ghost story.

"The Ghost of Mick McDonnell," was written within the last couple of years by Daithi Rua, a very tasty Irish singer/songwriter who we meet regularly on our travels. He was inspired to write something to commemorate the 100th anniversary of the end of World War I, after seeing the many monuments to the fallen in Belgium.

To what do you attribute the longevity of the band?

Early nights and healthy eating. Lots of greens. Seriously, I can only guess that doing something you really like for a living is conducive to a long career. I'm 69 coming on 40. Most of us have other irons in the fire, teaching, writing, taking an active interest in the business end of our careers, recording and, of course, liver research. Or, as you probably know it, relaxing in the pub of an evening.

How popular is the old music in Scotland today?

Unfortunately, in general, people would much rather listen to hip-hop and techno, just like every other part of the western world. On the playing side, there is an enormous amount of young people coming through the ranks who are playing with such skill, emotion and expertise. You have to have some hope that the music is far from dead.

You're known as a great storyteller. Can you tell one of your stories here?

I would love to, but then your readers wouldn't have to come to the show to hear it.

Judging by your tour schedule, you're very popular in America.

And very proud we are about that. We've been coming over to the States now since 1981. We often get three generations of the same family coming to our shows. That is just unbelievably touching and rewarding.

You tour a LOT. Is it still a joy for you to play live?

The playing part is what we live for. That's the fun part. The rest, the traveling, has become so unpleasant. Thankfully, when that's behind us for the day and we have a room full of people, we remember why we do it.

Will you be able to withstand Tucson's hot weather?