Big Business show off the beast in them 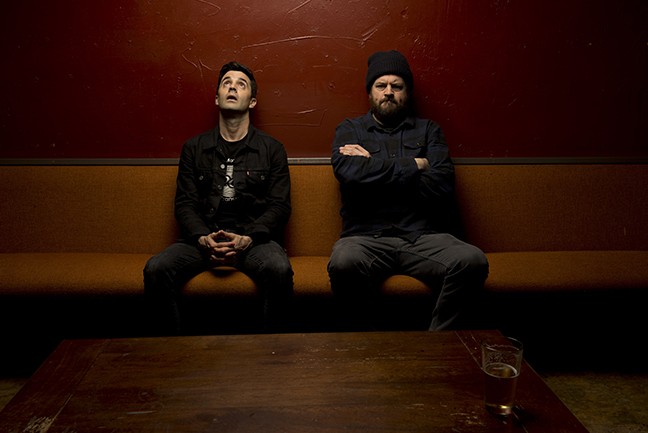 It's been a busy decade for Big Business, but they wouldn't have it any other way. The Seattle metal duo of Jared Warren and Coady Willis entered the 2010s as a "power quartet" with two other members, while also performing with metal legends Melvins. In the years since, Big Business has returned to being a duo of its founding members, they're no longer in the Melvins' roster, they've toured around the world a handful of times, released three studio albums, and started their own record label. Oh, and they're also concluding a three-month, 38-date tour in Tucson on June 24.

"It's been a very good tour to us," said bassist and vocalist Warren. "We're gonna bring 110 percent to this last show, just like we do every show. I'm just joking, we'll mostly just talk about what food we'll have when we get home and sleeping in our own beds."

Their newest album, The Beast You Are, dropped a little over a month ago. This was the first album Warren and Willis recorded without also working alongside Melvins in over a decade.

"This was the first record where we had a lot of time to practice," Warren said. "The Melvins was definitely a full-time job. So our focus on this record was really trying to be as hands-on as possible."

The Beast You Are is an immaculately produced monster. Warren's vocals soar without overshadowing the driving drums and booming bass. With a great balance of rhythm and aggression, it's just as likely to have you head-banging as flailing.

Reflecting the mood of the album's title, the 13 heavy songs (a fitting number) each tell abstract vignettes of anxiety and struggle. The album begins with the line "Nobody's safe and they're all omnivores" and ends with "Still going to bleed you like the beast you are/Trying to drown out the sound of hornets and bees."

"It's kind of the result of living in a terrible world where terrible things are happening, and trying to regain some control," Warren said.

But this is not to say the album is devoid of the humor so often found on a Big Business album. Punny track titles like "Abdominal Snowman" and "The Moor You Know" prove this, as do the fact even the instrumental tracks have "lyrics." For instance, the instrumental song "We Can Swarm" has written lyrics that go "Backa-backa-backa-backa/Ting tong ting" and so on.

"I don't ever really have lyrics before songs. The music always comes first." Warren said. "I let the music guide me, and then follow through with lyrics... But still, I do want the songs to allow the listener to follow some sort of story or feeling."

This is a similar style and story to their previous album, 2016's Command Your Weather. One could see this album title and the associated description of "the struggle for dominance of will over the power and unpredictability of nature" as making a kind of concept album, or one could simply see it as a kick-ass collection of rowdy and engaging songs.

All three of Big Business' most recent studio albums were released by their own label Gold Metal Records, after their previous label Hydra Head closed. Gold Metal doubles as both their record label, and their genre label. Tired of having genres like sludge metal, heavy rock and stoner metal thrown at them, Big Business came up with their own brand.

"It's a funny response to all the labels in metal," Warren said. "People love putting labels on stuff."

Although their live performances involve a fair amount of improvisation, Warren says Big Business aren't the type of band to write most of their music on tour. But this won't stop them from touring more. After this current string of dates, they'll get back on the road in August to travel the U.S., and then through Europe to close out the year.

Something In The Darkness: XIXA Solidify Their Sound on Sophomore Album Genesis

Hazy Harmonies: Mute Swan returns noisy as ever on 'Only Ever'