Get Low is an interesting sort of mystery film, because, unlike the standard mystery movie, the question is not "who dunnit?" but "what done he did?"

Robert Duvall stars as Felix Bush, an ornery old hermit who, like all the best ornery old hermits, lives on the outskirts of a small town in 1930s Tennessee. For some reason, the townsfolk have gotten the idea that Bush is a source of great evil, so they shun him and break his windows and throw rocks at his mule. Basically, they act like he's trying to build a mosque in their financial district.

In spite of this, Bush only occasionally fires his shotgun at trespassers, and when someone annoys his mule, Bush merely beats the man down with a wooden dowel, and not a metal cudgel. Still, none of this endears him to the local folk, who, in the manner of all local folk of the '30s, are good, hardworking Christian people who are tolerant of Negroes and Chinamen.

Meanwhile, the dapper Frank Quin (Bill Murray) is having trouble keeping his business afloat. He runs a funeral parlor, but it's the Depression, and people are so poor that they can't afford to die. Luckily, hearing about a friend's death leads Felix Bush to consider his own mortality, so he comes to Quin's office, tosses a big, lumpy wad of cash on the table, and asks Quin to throw him a good, old-fashioned funeral hoedown.

The catch is that Bush wants to be there to witness the funeral, probably to make sure that he dies childless so that his name will never be associated with torture, war crimes and the destruction of the U.S. economy. Although Quin's young partner Buddy (Lucas Black) thinks this is a bad idea, since it goes against the natural order of things wherein funerals are only held for people who can't enjoy them, Quin's good-hearted Christian sense of avarice is awakened by the wad of what he calls "hermit money," and so he agrees to cater to Bush's desires.

As plots go, it's a little pat, but to be fair, it's based on a true story, or a legend surrounding a true story, or some such. Tennessee in the 1930s was the sort of magical place where mythical tales arose among the elves and hobbits and moonshiners, and the real Felix "Bush" Brazeale did indeed have a funeral while he was alive, though most of the rest of the story is the invention of writers Chris Provenzano, C. Gaby Mitchell and Scott Seeke. They write great dialog, though Murray and Duval could keep an audience rapt if they were reading from Podiatric References in the Koran. In fact, Murray even gets laughs with the line "What can I do for you, sir?" Try that out at your next Lions Club dinner.

The problem with the film, then, isn't the dialog or the performances. Rather, the central story conceit sets up its own failure. The reason Bush wants the funeral is because he harbors a dark secret, some great sin that he must confess and has kept hidden for 40 years. The film keeps building to the revelation of his unforgivable crime, but when he finally gives it, it simply can't live up to the hype. Instead of painting him as a monster, it ennobles him, and since Duval's rich characterization has already ennobled the character for the prior 85 minutes, the ending needed something much more powerful to make it worth the build-up.

Still, while not a masterpiece, Get Low is an excellent cinematic experience. Director Aaron Schneider has mostly worked as a cinematographer, notably on the TV series Friday Night Lights, which is probably the best-shot show on television. In Get Low, his smart eye for composition and color takes advantage of the leafless autumn woods of Poland to create a sad, sepia-rich environment for Bush's final party.

This is Schneider's first feature, and if there are a few missteps in the storytelling, he still comes off as a talent worth watching out for. If he tilts toward the tameness and sentimentality of his ending, he'll only be known for his fine eye. But if the weirdness, intensity and interest in the eccentric that inform the earlier parts of the film show up in his later work, we'll be treated to some excellent cinema in the vein of Sven Nyqvist, Terrence Malick and John Huston.

Get Low is not showing in any theaters in the area. 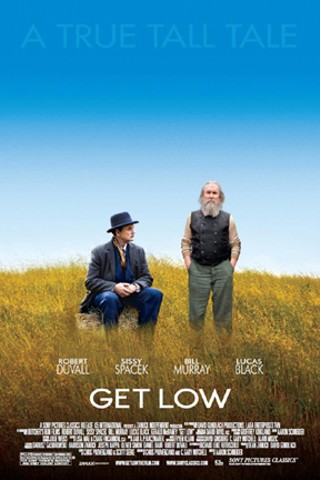