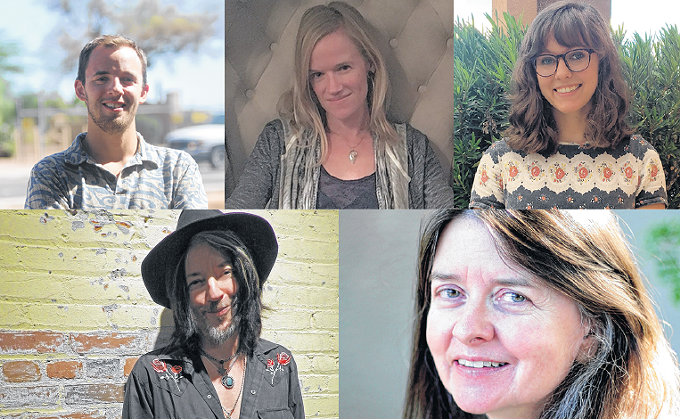 The Tucson Weekly won more than a half-dozen awards in this year's Arizona Press Club competition, including two first-place awards for arts and feature coverage.

She took third place in the political reporting category for "Rugrat Referendum," which examined the fight over an early childhood education proposition that Tucson voters rejected last year. Judge Hannah Fry of the Los Angeles Times Community News said Khmara "takes an important social issue and dissects it from every aspect (political, community and policy) and then weaves it into a compelling tale."

Khmara also won third place honors in the human interest category with her profile of a homeless couple. Judge Larry Aydlette, culture editor for the Palm Beach Post, said Khmara's "richly detailed story about a homeless woman and man in the desert puts a face on the often-ignored problem of homelessness."

Finally, Khmara won third place in the arts reporting category for "Forever Young," a profile of a long-time folk musician who had lost his wife to cancer. A judge from the Orange County Press Club said Khmara's piece was a "good yarn, a heartbreaking love story, and some effortlessly enjoyable dialogue and writing."

Longtime Tucson Weekly arts writer Margaret Regan brought home two awards, including a first-place award in arts criticism for a piece she wrote examining how local artists were celebrating wilderness even as it came under attack by Republicans in Washington. Judge Steve Barnes of the Albany Times Union said: "Smart, contextualized and accessible, the piece is deeply informed and informative, and it makes the case for the political aspect of visual art."

Regan also won second in community arts reporting for her coverage of the recovery of the Willem de Kooning painting that was swiped from the UA Museum of Art in the 1980s. A judge with the Orange County Press Club said: "Wow! An art heist story involving superstar artists and Willem de Kooning's painting ending up in Silver City, New Mexico after it was stolen from the University of Arizona Art Museum! There's some terrific reporting and writing in this piece."

Tucson Weekly calendar editor Emily Dieckman took second place in the food and beverage category for stories about an organic dairy where the cows wear fitbits and a moonlight meditation at a local resort that includes healthy servings of a locally brewed beer. Judge Brett Anderson, a two-time James Beard Award winner and food writer at the Times-Picayune, noted that "Dieckman's two stories demonstrate industriousness in finding human stories you don't read in other outlets."

Congratulations to all the winners.