The movies have gotten progressively darker; as the children at the film's center have moved into adolescence, it seems like they're headed toward some sort of wizardry apocalypse. This chapter's dark spirit is a far cry from the cinematic Disneyland that was the first installment.

As the film opens, Harry has a standoff with some playground bullies, his cruel and dopey cousin Dudley among them. When darkness descends upon the swing set, Harry is forced to use some spells to rescue his repugnant relative, which leads to a letter of expulsion from Hogwarts. Harry stands trial and is cleared of all charges, but the proceedings lead to a not-so-cheery first day back at school.

Things get worse when the students discover they have a new "defense against the dark arts" teacher, one Dolores Umbridge (Imelda Staunton). Sitting in a teacher's office full of cat plates--on which the cats actually meow and move around--she is a strict disciplinarian who rises up the ranks until she ousts the beloved Dumbledore (Michael Gambon) and implements a bunch of strict rules prohibiting the students from having fun.

Staunton, dressed in pink and all smiles, is pure evil under the surface, and a great addition to the Potter saga. When Umbridge forbids the learning of defensive spells, some of the students, led by Hermione (Emma Watson), form a group whose aim is to teach themselves protection against evil attackers. Naturally, Harry is their teacher. When Umbridge discovers their plot, it leads to an all-out rebellion.

Adding to the atmosphere of oppressed schoolchildren would be the fact that Ron Weasley (Rupert Grint) is starting to look like a redheaded Bob Geldof, who played Pink in Pink Floyd the Wall. Hey ... teacher ... leave them kids alone!

Daniel Radcliffe gets better with each film, as do cohorts Watson and Grint. Grint is no longer around merely for comic relief, as this film is mostly void of comedy. His character has adapted a more serious tone.

As Sirius Black, Gary Oldman is, once again, charming in a nice-guy role, something he's been good at lately. (I loved him as the goody-two-shoes cop in Batman Begins. ) Sirius is part of The Order of the Phoenix, a secret wizard squad formed as a safeguard against the return of the evil Lord Voldemort (Ralph Fiennes).

The film has a slightly rushed feel in places, probably because the producers are turning these things out so fast. A couple of the CGI effects (including a goofy-looking giant) are a little unpolished, but nothing is truly bad. As a whole, the film doesn't quite live up to the standard set by Alfonso Cuáron with Harry Potter and the Prisoner of Azkaban, which still stands as the franchise's only masterpiece.

These are only minor flaws, and they don't detract from the storyline, which has progressed to a maturity level that might lose some 7-year-olds. There are two films left in the franchise (the final novel in the series is soon to be released), and it doesn't look like they will be filled with rainbows and pie. Harry has a tough time in this movie, and things don't look to be getting any better in future chapters. All the more fun for us.

To put this one in perspective with the rest of the Potter films, I would place it at second-best after Azkaban, followed by Chamber of Secrets, Goblet of Fire and Sorcerer's Stone (the only film in the series I didn't like), in that order.

I don't read the books, so anybody who leaks Harry's final fate to me during the upcoming weeks will face my unholy wrath. If you think Voldemort is bad, wait until you get a load out of me after a good plot spoiler.

Harry Potter and the Order of the Phoenix is not showing in any theaters in the area. 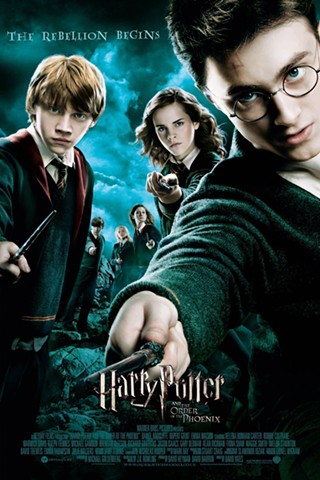