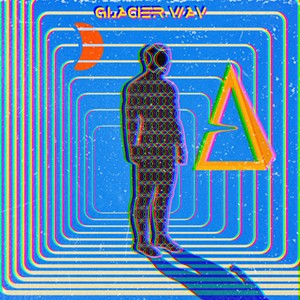 The debut release from Tucson electronic duo Glacier.WAV is equally paradoxical and practical. Written in the desert, but featuring icy imagery and cool synths, the self-titled album fuses environmental concepts and personal anxiety: climate change, government failure, pandemic isolation and romantic deficiency. It’s a singular album, looking both forward and back, but capturing that dizziness of the modern era. Even the natural imagery is formed from synthetic tones.

Composed by Frank Anzaldua and sung by Jaime J. Soto, the album combines pop hooks and electronic atmospheres, but stretches far beyond the central style of synthwave — a genre of electronic music taking influence from the keyboards and aesthetics of the '80s, which also combines elements of synthpop, disco and ambient. The whole style is well-represented in the album's cover art, an isolated figure standing on a cool blue backdrop beneath the moon, all warped by an analog tape haze.

"The first song we did for this project which set the stage for the album was ‘Glacier’,” Anzaldua said. “The song was about the increasingly dangerous situation of the climate and the apathy, resignance, and nostalgia our culture uses to ignore the problem. Here we used the nostalgia of synthwave to work as an analogy for the way we approach global issues."

These themes continue with the instrumental track "Colony Collapse," a vast electronic track reminiscent of the Blade Runner soundtrack, mixing melancholy and psychedelia over one of the most powerful guitar solos on the album. The entire song builds over a repetitive synthesizer melody adding layers of instruments and noise until the entire thing struggles under its own weight — hinted at by the title, a phenomenon of the Earth's disappearing bee population.

Soto says the album was also influenced by a memory of Al Gore in the early 2000s describing global climate change and its effects on the glaciers. Gore described how polar bears are left with fewer pieces of ice to survive on due to a warming atmosphere. That image of a drowning polar bear has stuck with Soto ever since, and worked particularly well when Anzaldua shared the music for the track that would become “Glacier.”

“The song and album snowballed after having these thoughts and memories,” Soto said. “I had landed on a perspective that made me feel powerful but anxious. I’m still trying to figure how to make better choices for the environment but failing at it. This oscillation between power and terror is where the theme of the album stems for me, even on the relationship songs.”

Although Glacier.WAV features some apocalyptic imagery, this is not to say it’s overly sombre. In fact, it’s surprisingly catchy and entertaining for all its influence. The album even plays with the concept of temperatures (global warming, glacial imagery) in the timbres of various synth notes throughout its runtime.

“When listening to the music Frank produced, I had a lot of atmospheric visions of earth and space. It was an important challenge for me to capture the images and feelings the music brought up in me,” Soto said. “The higher pitched synths on ‘Glacier’ made me think of alarms and urgency. The lower toned synths and my medium-low vocal made me feel warmth. I hope these elements are also felt by the listener. Growing up a desert kid, night-time Tucson skies are always an inspiration to my writing.”

The Tucson skies are a character themselves in the music video for “I Want to Feel the Sun,” produced by Dan and Gabe Singleton. The video details a chase through the Sonoran landscape with plenty of sci-fi effects thrown in for good measure.

A warning of sorts, Glacier.WAV never feels reprimanding. As the album continues, it even grows from tracks like "Never Gonna Make It" to "Vine," where Soto sings “I could never cut the vine stretching from your heart to mine. I know I’ll grow. I’ll grow in time.”

“We revive the ballads of the ‘80s from greats like Prince to also revive the love we have and need within ourselves and for our loved ones, even when it is increasingly difficult to accomplish in an age of anxiety,” Anzaldua said. “This is, has been, and always will be our way out.”