Gazing into the Abyss 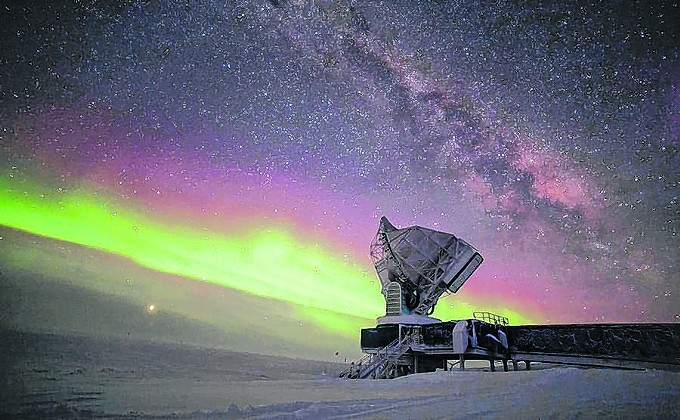 Seeing and understanding are two very different things. And when it comes to an object as enigmatic as a black hole, both can be difficult. Luckily, UA's astronomy department and Steward Observatory are making advancements toward both.

Inside the Flandrau Science Center & Planetarium, UA held a special conference celebrating their recent involvement with the National Science Foundation's Partnerships for International Research and Education program, known as PIRE.

PIRE granted UA $6 million to help advance the Event Horizon Telescope, an earth-size array of telescopes that aims to obtain the first-ever image of a black hole. To get an example of the power of the EHT, the resolution needed to capture an image of a black hole would be the equivalent of standing at UA and reading the date on a dime—on the East Coast.

"We're starting to see what a big deal this actually is," said Richard Green, an astronomer at Steward Observatory. "We're on the verge of getting some extraordinary images."

However, that is only seeing black holes. To help understand black holes, the astronomical conference also featured multiple virtual reality and augmented reality goggles to transport patrons all over the world, and even into the heart of space. The goggles aren't all fun and games, though. With the Event Horizon Telescope being a world-wide project, with over 50 universities working on it, VR and AR allows scientists and researchers to, in a sense, work in the same lab.

"The good thing with augmented reality is that you can simultaneously explore the same thing and work on the same project with someone on the other side of the world," said Dimitrios Psaltis, UA astronomy professor and the project's principal investigator.

The AR and VR machines had patrons flying over the UA campus, transporting to telescopes and observatories all over the world, and even manipulating black holes with their own hands.

After years or work, the next step with the EHT is to capture the first-ever image of a black hole. In fact, the EHT may have already taken the first picture. However, with the terabytes and terabytes of data that it collects every single day, poring through the information can prove difficult. That is why the PIRE grant and collaborations with dozens of universities around the world is so important: The more workers, the faster the work.

"Currently the data is so vast, we get billions of samples a second, and we collect it and literally FedEx it. The transfer of data between 50 institutions that are working on it is too slow." Psaltis said. "This is helping us develop more efficient ways of collecting data, and instead of everyone working independently, it is a collaborative effort."

The EHT's first images were captured last April, and the hope is to sort through the vast amounts of data and perhaps capture the first image of a black hole (in radio/ultraviolet waves, as black holes aren't visible to the naked eye) within the year.

Some of the universities UA is working with on this project are Cornell, UC Berkeley and University of Maryland, as well as campuses in China, Mexico and Netherlands.

"As someone born in Mexico, I am thrilled with the collaboration that will come from this grant," said College of Science Dean Joaquin Ruiz.