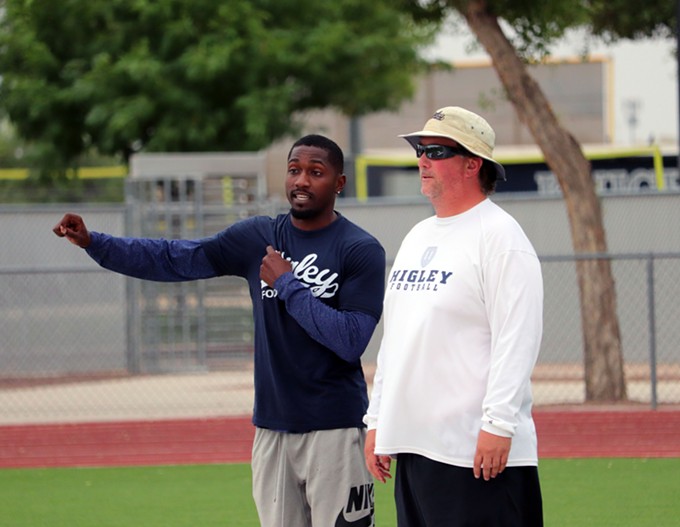 (Zach Alvira/File Photo)
DaVonte’ Neal, a two-time All-American while at Chaparral in Scottsdale, yearned to make a positive impact on Higley High players where he was a coach. He’s shown here with coach Eddy Zubey.

In retrospect, the clues were out there. And, in some respect, they still are.

On Nov. 4, 2017, Davonte’ Neal, the former Arizona Wildcats football player turned Idaho State assistant football coach, posted on Twitter, “It hurts but once love is lost there is nothing you can do but watch it pass.”

A week and a half later, on Nov.15, Neal tweeted, “Betrayal at its finest.”

In between those dates, at around 3 a.m. Saturday, Nov. 11, Maricopa County Sheriff’s deputies responded to an accident at the overpass near Interstate 10 and Elliot Road in Tempe. There they discovered a male driver with what appeared to be a gunshot wound, and transported him to a hospital, where he died the following day. The man was identified as 25-year-old Bryan Burns.

It would take nearly five years before any outward progress was made on the case. But on May 25, 2022, a man living in an apartment in Pocatello, Idaho, was finally arrested for first-degree murder, on an extradition warrant to Arizona. Fans of the Wildcats player were shocked to learn the man arrested was Davonte’ Neal.

According to court documents, the cause of the shooting may have been Neal’s expressed jealousy over his ex-girlfriend being in a relationship with Burns.

Those who know Neal’s story also knew the athlete took his relationship seriously. He and Marie Burton had dated since seventh grade, according to his dad, and in 2013 the couple had a baby girl together.

Shortly after starting college that same year with the Notre Dame Fighting Irish football team in South Bend, Indiana, Neal decided to leave Notre Dame after just 13 games and move back to Arizona, specifically to be closer to Burton and their daughter.

But the relationship didn’t last. In the court documents, Burton told investigators that she and Neal had split up three years before the shooting and that Neal was “upset she had moved on from their relationship” and had taken up with Burns.

Four days after the shooting, Neal tweeted another comment — which, like his others, has yet to be deleted: “Eventually you realize that the rose you once maintained turned out to be a snake.”

It’s easier to piece together a cohesive story from the events around November 2017 than it is to make sense of the long timeline between the shooting and the arrest.

Jonathan McCall, a reporter and anchor for 12 News (KPNX) in Phoenix, says he’s been trying for weeks to learn why it took the Maricopa County Sheriff’s Office nearly five years to arrest Neal even though they had uncovered several pieces of convincing evidence early on in the case. (Tucson Weekly has also submitted multiple records requests that have so far gone unanswered.)

“I am still waiting to get an answer,” McCall says via text. “I had to dig pretty deep to get more details. It’s pretty crazy.”

McCall obtained court documents that showed early evidence the MCSO had gathered indicating Neal’s possible involvement in the shooting. According to the documents, Burton told authorities that about 30 minutes before the time of the drive-by, Neal texted her asking if she had gotten home. A short while later, she received a call from Burns telling her that someone in “a gray or silver car” was following him.

Investigators determined that immediately before the shooting, Burns’ car was sideswiped by the other driver. A witness at the scene provided detectives a license plate they matched to a 2010 Honda Accord registered to one of Neal’s sisters.

When they located the car they found contact damage to the front passenger-side door and fender consistent with a sideswipe crash. Additionally, Phoenix Police inspected the car and found gunshot residue inside.

The reports show that four days after Burns’ murder, Neal was taken into custody and questioned by investigators. When asked about his whereabouts on the night of the shooting, Neal told detectives that he had been at an Applebee’s until around 9 p.m. before returning to his home in Scottsdale. During questioning, Neal also stated that he did not own a gun.

However, phone records obtained by detectives included a text message between Neal and a family member just four months before Burns’ murder where Neal professed that he did, in fact, own a gun. Just hours after the time of the shooting, Neal received a text message from a family member suggesting he get rid of the gun and delete the message (apparently the message was still viewable in the phone records).

Despite all this evidence, Neal was released after questioning by detectives and the incident appeared to be filed away. The one-time NFL hopeful went on to hold assistant coaching positions at two high schools in the Phoenix area, Dobson and Higley, before joining the staff at Idaho State, where he was able to pass a criminal background check prior to employment. “Neal’s background check was clear and he was approved for work when hired in January,” said University President Kevin Satterlee in a statement.

A brother of Bryan Burns recalled running into Neal about eight months after the shooting, walking through the Arizona Mills mall in Tempe.

“At that time when I’d seen him, I was in shock,” Brandon Burns recently told reporter Greg Woods of the Idaho State Journal. “I’m seeing the person that took (Bryan’s) life right here in front of me, walking around. That was kind of hard for me to deal with.”

The brother told Woods that he had approached Neal to ask him some questions but that Neal “tried to lie” about who he was. “At that time, he looked like he was going through a lot of stress,” Burns said. “He didn’t look like the person he looks like now. Now he looks like he’s been carefree . . . like he got away with whatever he did at that time.”

On a December 2020 video podcast hosted by Natrell Curtis, an old family friend of Neal’s who now works as a substitute teacher in the Phoenix area, Neal recounted why he came back to Arizona after just starting his college football years at Notre Dame.

“I didn’t want my daughter growing up those first two years without me,” he said. “I can play football anywhere. But it would benefit me more to come out here and be with my daughter and her mom.”

Neal recalled telling Indiana coach Brian Kelly his reasons for leaving, which Kelly supported, even securing Neal a scholarship at the University of Arizona.

“I told him, ‘I got my family back home, and as much as I would like to stay here, me, as a man, I can’t stay here. Because I need to handle my business. I’m the one that did it, I gotta go handle that.’”

Over the course of the nearly two-hour conversation between the longtime friends, Neal comes across as an exemplary family man and mentor, discussing the gratification he received from passing on to younger generations all the skills he’d learned as arguably one of the all-time greatest high school football players in the state (at Chaparral High in Scottsdale, he was the first player to ever have more than 1,000 yards both rushing and receiving, making Arizona Player of the Year for two straight years).

Watching the interview, it’s hard to believe this is the same man that, just three years earlier, was hauled into questioning and considered the most likely suspect in a fatal drive-by shooting.

It’s likely Neal’s lawyers will play up that incongruity and insist he couldn’t have been the one to fire the shots that killed Bryan Burns. According to the Maricopa County Superior Court website, Neal’s lawyers on July 12 challenged the grand jury proceedings. For now, Neal is being held on a $1 million bond, and no one connected with him, it seems, is talking.