The Gaslight Theatre starts the summer off right with Space Trek 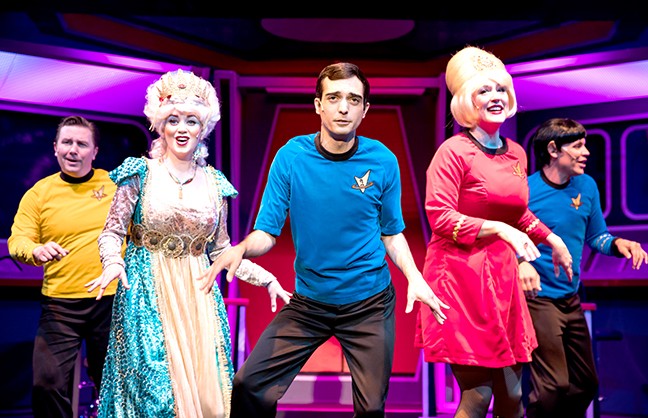 Courtesy Photo
Beam me up, Scotty!

Captain's Log, Star Date 22.63: The crew of the Spaceship Excelsior is traveling through the outer asteroid belt of the Forbidden Zone, a hostile sector of space that's long been the site of a brutal war between the intergalactic civilizations of Mylanta and Zantac.

Though the crew is normally off exploring the last uncharted dimensions of the galaxy and bravely exploring the great unknown, their current mission is one of peace. The Excelsior is heading to retrieve the beautiful Mylantan princess, Serena Andromeda, who plans to broker a treaty with the presumably evil Zantacians.

The princess must remain safe! The fate of countless innocent lives depend on it.

It's pretty clear Gaslight Theatre writer/director Peter Van Slyke found plenty of inspiration in the adventures of James Tiberius Kirk when he wrote Space Trek, the most recent production to hit the stage at Tucson's campiest theater.

After a model ship flies over the head of the audience, the production opens on the bridge of the Excelsior, complete with multiple crew stations, beeping lights and sensor readouts.  At the helm is Captain James W. Quick, a seasoned Space Fleet officer with a hard set jaw and a determined look in his eyes. Joining the unflappable Quick are First Officer Sprock, Lt. O'Hara, Doc McCrea and Monty, the ship's Scottish engineer. A loveable group of officers, the crew of the Excelsior are two parts professional and five parts ridiculous when being played by the experienced Gaslight cast.

Leading the way as Captain Quick is Mike Yarema, who said his uncanny impression of Kirk was all part of the plan. When he found out he was playing the role of the captain, Yarema said that William Shatner's iconic, pregnant pauses and campy overacting would be integral tools for his own time in the chair. Luckily for Yarema, he's able to manage the classic starship captain persona without wearing out the role.

Yarema's Quick is the most developed of the Space Fleet characters, if not solely for the actor's obvious appreciation for the source material, though the Gaslight cast as a whole perform their parts with dedication.

"It's our job to make sure the audience has as much fun as possible and enjoys the experience as much as the previous audience, and I think there's a lot of responsibility there," Yarema explained. "We take that seriously. We don't take ourselves seriously, but it's our duty to play the part honestly."

While Yarema may hog most of the spotlight, he's not alone. Playing the role of the logical and calculating first officer is the normally vivacious Jack Chapman, whose sprightly personality is barely subdued as Sprock. Filling out the cast of heroes is Jacob Brown as Doc McCrea and Heather Stricker as Lt. O'Hara, while Gaslight regular Joe Cooper returns to affect a horrible Scottish accent as Monty.

Facing off against the galactic do-gooders are a team of dastardly aliens hellbent on bringing chaos to the Forbidden Zone, with the evil Voltaire calling the shots from his citadel located in Zantac's capital city, Kaopectate. At his disposal are Commander Titan and Ambassador Risa Galacticus, a dastardly duo of dolts who will stop at nothing to accomplish their overlord's evil plan.

Will peace prosper? Probably not in this melodrama.

Taking control of the Zantacian forces as Voltaire is Todd Thompson, whose humor often manifests as being the goofiest cast member on stage at any given time. Dressed in his best Klingon garb (complete with forehead ridges), Thompson tiptoes a fine line between cheeky menace and outright hilarity. No evil king is complete without a cast of supporting minions, and David Orley brandishes his own brand of silliness as Titan.

And while she may find herself cast as a sidekick, it's the diminutive Erin Thompson who acts as the perfect balance to Yarema as Ambassador Galactus. Complete with a curly updo of bright pink hair, matching shoulder pads and an outfit that looks like it was designed by Hugo Boss, Galactus is a mix between Effie Trinket, Senator Palpatine and Jacobim Mugatu.

As she's normally cast as a defender of the downtrodden, Erin said it's exciting to tap into a "scary, evil" character while still maintaining the Gaslight's long established air of ridiculousness.

Whether evil or otherwise, the entire case keep one another on their toes with plenty of off-script quips and physical humor, something both Yarema and Erin said is only possible because the cast has spent years working alongside one another. Though they're still relatively early in the Space Trek run, Yarema said he's already finding a few moments to inject a little extra humor.

Though Trek is short on the one-liners that you typically hear on the Gaslight stage, there's plenty of opportunity for situational humor.

The cast is only part of the Space Trek journey, and no melodramatic mission into the unknown is complete without great uniforms and well-designed spaceships and foreign planets. As the theater is in charge of every aspect of production, it's a given that any Gaslight show comes complete with a variety of fully painted sets, prop gags and plenty of unique outfits. Trek is no exception, with each member of the cast dressed in their space fleet finest, and every set finished to look at home on an NBC lot in the '60s.

That's only part of the equation that's kept the theater running for more than four decades, and any Gaslight regular comes prepared to sing along before the show with The Gaslight Band, which also provides a steady, dramatic pulse throughout the performance.

Space Trek may be at the top of the bill for the evening, but the show isn't over once—spoiler warning!—the universe is saved. The cast and crew come back to perform the music-centric olio. This time around, Cooper steals the show for his work portraying the King of Shlock, the Baron of Bad Taste and the Ayatollah of Trasherola, the goofy Chuck Barris.

As Barris, Cooper brings the audience along for a "taping" of The Gong Show, complete with guest appearances from the rest of the cast as zany auditioners, and plenty more opportunities to boo and cheer the thespians along. ■