Besties has a whole new way to cook a burger 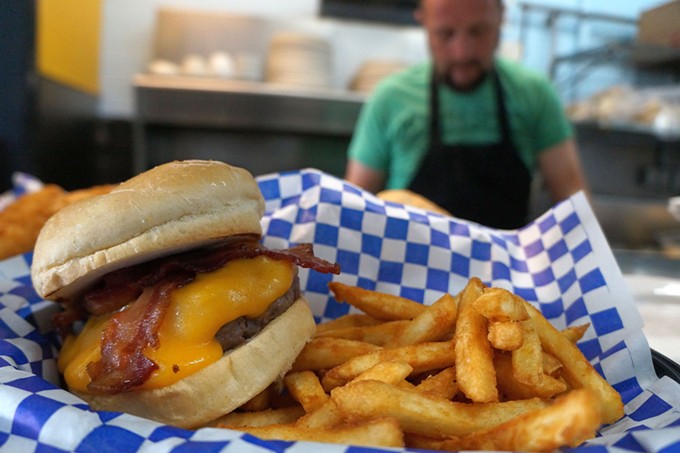 We here in the southwest like our burgers grilled. Yes. That is the right way because, apparently, it is the only way. But what if I were to tell you that an Atlantic-hugging state called "Connecticut" enjoys having their burgers steamed. That's right: steamed.

We proud Tucsonans have always slapped meat patties down on a hot flattop or a fiery grill during an outdoor cookout. And that's the way we like it! So, the idea of a steamed burger might sound like a very foreign concept. Steaming food is normally set aside for crustaceans, the occasional dumpling or maybe even hot dogs. Definitely not burgers. Well dear readers, I am here to tell you that steamed burgers are the way of the future by way of a method that is nearly 90 years old.

In 1930 a man by the name of Jack Fitzgerald, owner of Jack's Lunch in Middleton, Connecticut, fashioned a copper tower filled with hot simmering water to house up to 18-square, slider-sized burger patties and even smaller blocks of melty cheddar cheese. Surprisingly, that innovation went over extremely well, but oddly enough never really made it past the southernmost New England territory. Luckily, local restauranteur Kade Mislinski, a huge fan of steamed burgers, has brought that unusual manner of cooking burgers to Tucson in the space once occupied by Mother Hubbard's.

"Historically, we have been cooking the crap out of burgers since they came into fame," said Mislinski, as he worked the line. "I've spent a lot of time in Connecticut and every time I've had a steamed burger, I knew that it was something special. I've also spent a lot of time in Tucson restaurants, opened a few myself, so when this unique opportunity came my way I knew it was right to introduce Tucson to the steamed burger."

Besties Fish & Burger is a taste of New England in both fare and ambiance. It's relaxed on all levels, especially with the menu. There are a few burger options, a fish and roast beef sandwich plus a couple of combo platters including the BFF ($7.19), which offers a steamed burger, lightly battered cod, hushpuppies and fries. If you have visited or even lived in New England, Besties, at best, is a wink at classic quick lunch stands of seaport East Coast, without the watery clam chowder or screeching Patriots fans.

"The initial response has been amazing," said Mislinski. "We've been fortunate to have a lot of local chefs and food-focused people come by to check out what we do. The process is pretty unique, at least to Tucson, so we've been having a great time showcasing our technique to those unfamiliar to the idea of steaming burgers. The best part is the reaction from random customers. At first, they are way hesitant at the steamed burger concept but once they dive in, some say they may never go back to conventional cooked burgers. And, honestly, I don't blame them."

Having family scattered along the East Coast, I have been fortunate to have eaten authentic steamed burgers from creaky grub shacks that boast a line around the colonial cobblestone block. Besties is as close as one can get, outside of moving into the 203 or 860 area codes. These little square bundles of ground beef come out of the steam chambers drooling not just from the controlled humidity but the locked-in flavor, making the bun slightly soggy from the escaping juices. You've had a juicy burger before, but one that has been steamed is a different experience altogether. Top it with some cheese, thick and runny from the steam process, and your newfound burger infatuation has clinically taken hold.

"I've opened a lot of restaurants and have worked in even more," Mislinski said. "But Besties is personal to me. I'm getting at that stage where I need to slow my roll and if I go out with a business like this, I'm happy. This project is a labor of love and eventually we will be introducing even more East Coast ocean catch staples to the menu. Originally, I wanted the name Kap'n Kade's, kind of like Long John Silver's. But we stuck with Besties because it is close friends that made this whole concept possible."

So when you pop into Besties, don't be surprised to see a little league team celebrating a win or even a post-church gathering chowing down after giving thanks all morning. Besties is just that kind of joint. For a low price, you get a lot of great food, including some of the tastiest burgers in town. That are steamed.

Oh, Connecticut. Is there anything that you can't do?