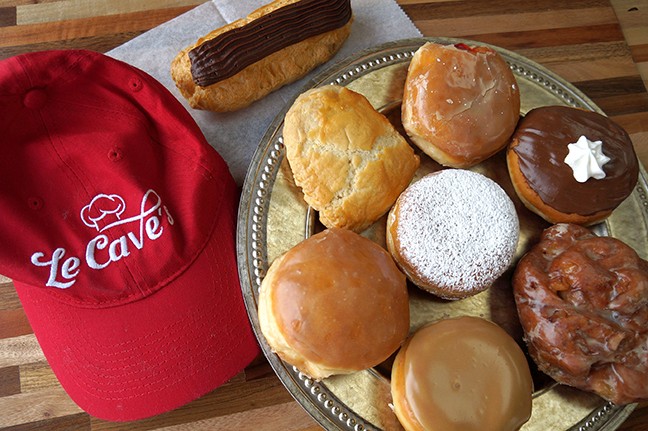 First of all, the "Cave" in Le Cave's is pronounced Cave, like where a bear would live. Not Caah-vz, as many people, including me, have been calling it all these years. New owners Naomi and Chris Pershing informed me that the name isn't fancy, even though the pastries they serve up are high-echelon exquisite. But you probably already know this because Le Cave's has been a Tucson pastry staple since 1935.

The original location on South Sixth Avenue had been experiencing health code issues over the last decade or so, seeing as it was housed in a building almost as old as Tucson itself. Structurally, it was far from secure, with flooring that was literally imploding from age and wear. It got so bad that at one point, a superior court judge ordered it shut down in 2017 until the owners could repair and pay the fines. Longtime owner, Rudy Molina Jr., had to file for bankruptcy in order to keep the time enduring business afloat.

In a desperate move in desolate times, Molina put up a sign by the register: "Business for sale."

"That's when we got the call from my sister saying that Le Cave's was for sale," says Naomi. "And that's when we knew we wanted to take over and save it."

Tucson natives themselves, Naomi and Chris Pershing returned home after living in Seattle for 16 years where Chris took a job in the tech industry while Naomi, a longtime chocolatier, had her own confections business. It was family that brought them back to Tucson. That, and almost two decades of living in a cold rainy climate.

"We have always been big fans of Le Cave's so when the opportunity to buy the name, along with the recipes, came along it was sort of a no brainer," Chris says.

Knowing that operating out of the old building would prove both futile and very expensive, they began their search for a sturdier location. In the space once occupied by a Jack In The Box, on East 22nd Street, the Pershing's began their renovation, along with the intent of altering not even one granule from original Le Cave family methods of baking.

"If we did," Chris says, "we would probably have a riot on our hands."

The couple probably would have wanted to move even if the old building had been fine.

"The parking there was really bad," Naomi says. "Here we have plenty of parking and we are installing a drive through window as well."

If you just moved to Tucson (welcome!), are only visiting or don't enjoy local historic culinary institutions, Le Cave's has been serving up delicious vegan donuts since its inception nearly 85 years ago. What's the secret?

Yeah, they wouldn't tell me.

"I started baking with the Molina's almost 20 years ago," says Le Cave's head baker, Anthony Cordero. "They taught me all of the techniques and recipes passed down from the original owners. The times when we were shut down were very trying but we always knew we had such a good product. But I can't tell you how the donuts taste so good without eggs or dairy. It's good to have some mystery in your life."

The first time I had a Le Cave's donut over a decade ago, I tried to wrap my food nerd of a brain around the fact that they were completely free of any animal product. Sure, the cakes, pies and most pastries have dairy in their make-up, with an egg wash on their empanadas, but otherwise, Le Cave's has been a pioneer in vegan culture before vegan culture was vegan culture.

"Business has been just amazing and the community has been so supportive," says Naomi. "Now and then we get a complaint about the new location, but it is very rare. We have people coming in that are third- or fourth-generation customers, all of whom have stories to tell. That reason alone is what gets me up in the morning and doing what we do."

Chris says he's not concerned about trouble with the health department.

"We've worked hard to make the new Le Cave's location up to code, along with getting it to look a lot less like a fast food place," he says. "All we want to do is carry on the Le Cave's tradition." ■