From Wastewater to Cold Beer

Arizona brewers are making suds from what now? 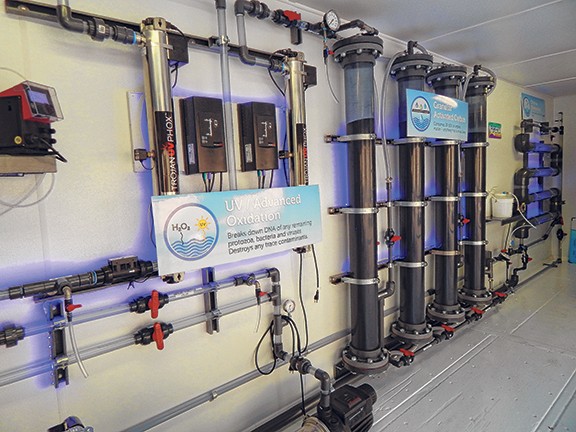 Tirion Morris
Tucson Water’s mobile purification system, on the back of a truck, processed the reclaimed water to make it the foundation of Clear Water Pils, a Bohemian-style Pilsner.

There is a certain "yuck factor" for many people when it comes to the idea of drinking water that has been through the sewer system.

But relax your gag reflex: With today's technology, local officials have the ability to clean reclaimed water so well that it's fit for drinking again.

And in an effort to change the public's perception about the treated water, Tucson Water and the Pima County Regional Wastewater Reclamation Department teamed up for the Arizona Pure Water Challenge, which challenged independent brewers to make beer out of recycled wastewater.

Tucson's own Dragoon Brewery's Clear Water Pils, a Bohemian-style Pilsner, took first place out of 25 entries and is available on draft at the taproom.

Conservation was key in Dragoon's involvement with the project from the beginning, Rawlins says.

"The brewing process uses a lot of water, so anything we can do in Arizona, in the desert, to conserve water appeals to us," Rawlins said.

She adds that the friendly competition brought together the breweries in a common goal. "Raising awareness through beer for conservation has been great," she says.

Producing the purified-water beers was a two-step process between Tucson Water and the breweries.

Tucson Water's Robert Hackethal walked curious taproom visitors through a five-step process that begins with secondary treated wastewater that is treated through a process of ultrafiltration.

The water travels through carbon filters to remove the chlorine, six reverse osmosis chambers, a hydrogen peroxide treatment and a UV reactor before it is ready to drink. The truck produces drinkable bottled water, as well as all of the water used by the 25 breweries involved in the competition.

Once Tucson Water produced the clean water, it was up to the breweries to make the beer.

Because the water was clean, drinkable water at that point, explained Rawlins, the brewing process was hardly different than normal. Dragoon did, however, take special efforts to make sure that every drop of water used in making the Clear Water Pils came from the truck. Dragoon brewed a 15-barrel batch of the Clear Water Pils and will not distribute it beyond the taproom but has it on tap for patrons to try.

"It's a great beer, and people are really enjoying it," Rawlins said. "It's opening a conversation. People are making a point to come in and try it and educate themselves about water conservation in the desert."