From Ordinary to Transcendent 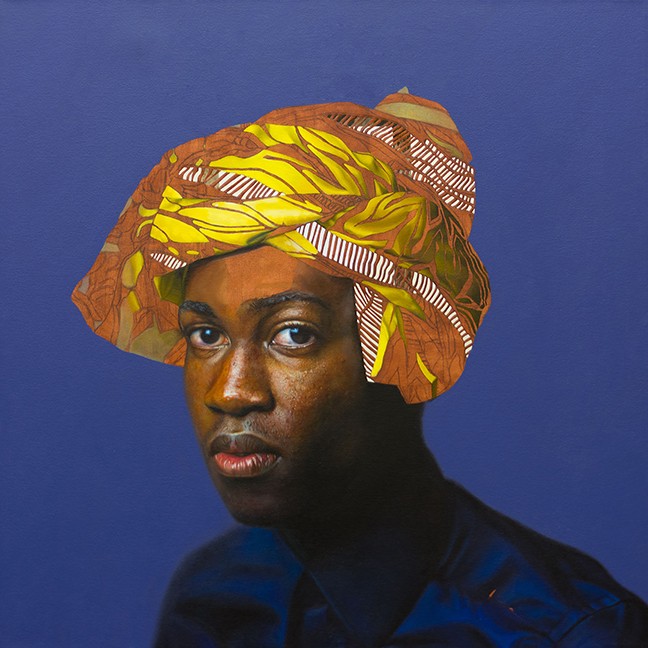 Photographer Kathleen Dreier was down at Tucson's Rhythm Industry studio last summer to take some pictures of kids in a circus camp.

She found the young performers outside on stilts, holding hands in a circle, taking a few minutes to calm down before they showed off their new skills in a show. Their teachers were right there with them in the ring, reassuring the kids in their care. And the light was just right, soft and glowing.

Dreier clicked, but not before a big white dog serendipitously jumped into the frame.

"Tannikan and the Circus Campers," the bright color photo that emerged from her digital camera, does what photography does best: transform the ordinary into the transcendent. Through the magic of art, that circle of sweaty kids and teachers in a homely gravel yard unexpectedly metamorphoses into an allegory of harmony.

The photo even has a classical air; you could imagine a stately circle like this painted in the round on an ancient Greek vase. The dog has its part to play too. The impromptu leap of the pooch adds a graceful note of everyday joy.

In these shameful times, when photos of kids in cages are burned into our brains, courtesy of Uncle Sam, Dreier's picture of happy, protected children reminds us that we can and must make a world that's better than the one we have. 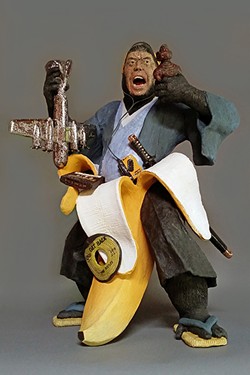 This rousing piece is just one of 85 works by 70 Arizona artists in Arizona Biennial 2018, a splendid, sprawling juried exhibition that opened last week at the Tucson Museum of Art. Guest curator Rebecca R. Hart, curator of modern and contemporary art at the Denver Art Museum, culled the winners from 1,507 entries, submitted by 549 artists residing in the Grand Canyon State.

I'm happy to report that 37 Tucson artists were admitted to the show; Phoenix provided 16 artists,

Tempe five. There were two each from Scottsdale and Flagstaff, and one each from the small communities of Surprise, Cortaro, Gilbert, Prescott, Jerome and Winslow. Male and female artists are almost evenly divided, a welcome development.

Many of the artists are young; the youngest, photographer Dominique Martinez of Tucson, contributes a compelling self-portrait in the shower, her face dripping wet. Her date of birth? 1997.

Once upon a time the every-other-year show tried to cover all manner of Arizona arts, from cowboy to contemporary, a tactic that made for a comprehensive but ultimately chaotic show. Now it's almost always a look at state-of-the-art, cutting-edge practice. While acknowledging that the choices reflect her own tastes, curator Hart says that the works also are in line with a "larger dialogue" in contemporary art.

Photography seems to dominate the show, but the media ranges widely from painting to works in fiber and metal, to sculptures, ceramics, found objects, videos, wildly mixed media and even performances. A hilarious performance piece, "Mansplaining Help Desk," engineered by artist Malena Barnhart, seats a couple of mansplainers live and in person at a table with a sign advising viewers to ASK A MAN.

On opening night, the two men cheerfully explained to me, tongue-in-cheek, that all history really is men's history. One, unasked, went on an extended flight of dizzying, snooze-inducing mansplaining, detailing the ins and outs of the art of Sir Joshua Reynolds. Their off-the-cuff monologues were impressive, to be sure, but the whole enterprise is a dead-on critique of male self-importance.

One of the most interesting mixed-media pieces is a self-portrait by the talented young artist Papay Solomon, a war refugee born in Guinea, Africa, in 1993, now living in Phoenix. He plays with identity in his "K.O.S. (Knowledge of Self), Self Portrait." It's a beautifully rendered oil of his face in close-up, but something is off: a turban wrapped around his head is punctured with holes.

Peek into the holes and you'll see yourself in a mirror behind the canvas. Your face merges with Solomon's, and the two of you become one. That fluid duality has an additional meaning to Solomon. As he writes in an artist statement, it reflects the refugee's need to "juggle two or more cultures."

This show is striking for its beauty—for gorgeous landscapes like Joe Cornett's photo "Ghost Hoop Panoramic," a sweeping horizontal view of stretch of land in northern Arizona; for Cam DeCaussin's old masterly suburban scenes painted in oil; for Kate Breakey's breathtaking double portrait of the solar eclipse and the blood moon, "Sol y Luna: A Perfect Match," a pair of photos gilded with gold dust.

Kareem Ferreira paints a lovely black-family tree in "Cloth," an acrylic painting and cloth collage that re-creates old photos of his forebears. Yana Payusova deploys a robust Russian aesthetic in her wild figurative ceramic bowls. And Tucson Ellen McMahon resuscitates the fast-disappearing beauties of our desert in a series of 12 tiny "Diminutives," mixed-media paintings in ink and gesso and charcoal acrylics.But the works in this good-looking exhibition don't avoid today's struggles over identity and belonging or over black lives and female aspirations. Not surprisingly, many pieces deal with immigration.

"Deferred Action," by Costa Rica-born Karlito Miller Espinosa, now of Tucson, is a simple, eloquent work consisting only of a pair of door mats positioned on the floor. Evoking the limbo that traps DACA recipients, each not-so-welcoming mat has a text in Spanish. One reads, "Ni de aquí," the other "Ni de allá." Neither from here nor from there.

Maya Holzman, also of Tucson, skewers stereotypes about Latina women in digital prints whose bright colors contrast with everyday realities. The women in her works do hard labor, but they're treated as jokes.

"Viva Mexico" pictures an older Mexican woman with a pair of pink cleaning gloves on her hands and an insulting "Mexico" tourist hat on her head. Her younger counterpart in "Café con Jabón" (coffee with soap) uses a straw to sip dangerous cleaning fluids right from a spray bottle. The setup is comical, but the piece alludes to the real health issues faced by domestic workers.

Sama Alshaibi, a professor at the UA, also looks at the confluence of racial prejudice and sexism. An exile from both Palestine and Iraq, she makes sensuous and stark digital photos that honor the rich histories of both of her much-maligned homelands, while denouncing the wars that have ravaged them.In "Arabic and Cuneiform: to read and write," she photographs her own arms painted with script, one in cuneiform, an early writing system developed in ancient Mesopotamia, the other in Arabic. The letters are blood-red, suggesting the violence that has maimed both places. "Obverse Discursive" is a searing self-portrait in a veil, her mouth stitched and silenced.

Women's traditional embroidery is resurrected by Alison Sweet of Tempe to restore women to the history that the mansplainers says is all male. Sweet unearths historical photos of white women pioneers of the West, standing outside dugouts or cabins, and stitches traditional quilting patterns right into the images, covering the scene with women's work.

Tucsonan Willie Bonner, likewise, recovers the African-American past in a brilliant painting made entirely of tar and feathers on cotton canvas. These painful materials hearken back to the days of slavery and Jim Crow, when enslaved back people or unpaid sharecroppers spent entire lives bending over the cotton fields, when "trouble-makers" could be tarred and feathered, whipped or hung for disobedience.

Bonner layers the work, called "Black Gold," with rows and rows of tar, and it looks like he pressed the soft material onto the cotton with his thumb, an arduous task that mirrors the monotonous work his ancestors did picking cotton. But here and there the black tar is smudged or scraped off. These imperfections, you begin to realize, represent scars created by the sting of the whip. The whole painting evokes black flesh that's been tortured and abused.

At first you might think this anguished work is just an interesting abstraction of thick and layered shades of black. It is, but it's also a lot more, a testament to the artist's own struggles both with the burdens of the past and the realities of today, when it's necessary to say what should be obvious, that black lives matter.

Art history and the history of the past both animate this work, and art can help change the present and the future. As Bonner writes, "A revolutionary visual aesthetic must emerge that re-appropriates, revises and reinvents."