From All Sides: Our Border Town at Tucson High

Telling the stories of migrants and Border Patrol alike 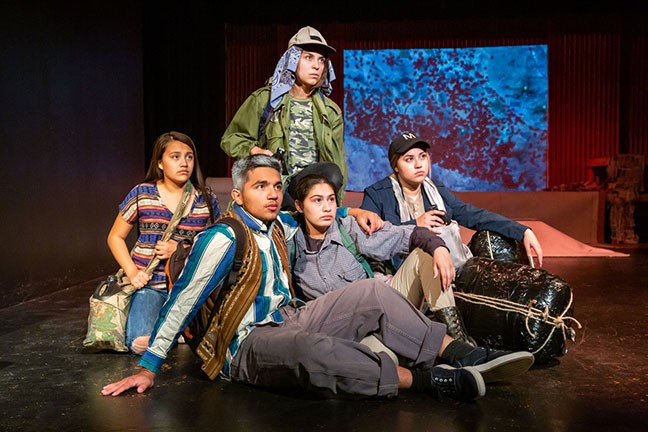 A new play by Amy Almquist
Performed by students at Tucson High Magnet School
Three-week run: 7 p.m., Thursday through Saturday, April 25 to 27; 7 p.m., Thursday through Saturday, May 2 to 4. In the third week, there will be a show and 7 p.m.. Thursday, May 9, and two shows on Saturday, May 11, a 2 p.m. matinee and 7 p.m. evening performance. No show on Friday, May 10.
Performance in the Little Theatre at Tucson High Magnet School, 400 N. Second Ave., at southwest corner of North Euclid Avenue and East Sixth Street.
$15 general; $12 for students and staff from any school, and for seniors 65 and up.
Tickets at www.tucsonhightheatre.com
225-5326
Play runs 2 ½ hours, including intermission

It's not every day that a real-life deportation changes a play.

But Our Border Town, an original play making its debut next week at Tucson High Magnet School, is a collage of true stories collected from some 45 real people living in the borderlands.

And two weeks before the play was set to open, one of its real-life characters was deported, a woman called Elena in the script.

The bad news hit the cast hard, especially the student who plays Elena and had been rehearsing the part for weeks, telling Elena's story in Elena's own words.

Drama teacher Art Almquist said the play would go on with Elena's story as written, enacted by Laysha. But a text announcing the deportation will be added to the video projections running on a screen above the stage. The sobering news will make for a solemn end to Elena's grim story.

But the realness of the play is important to the students, Art said. "The kids are crazy about it. It's about what's happening now."

Elena fits right into today's news. She was an asylum seeker who'd been locked up for two years in Arizona's Eloy Detention Center, run by the for-profit prison corporation CoreCivic.

Elena had told her story in an interview with Art and the playwright, Amy Almquist, his wife, had traveled together to the harsh prison to hear Elena's story.

"It was a very intimidating, scary place," Art said. "Elena is a wonderful woman." And hearing her describe her efforts to win asylum was "very moving."

The play got its start last summer, when President Trump set in motion the twin policies of zero tolerance and separation of migrant children from their parents. Julian Martinez, a drama teacher and co-director of the play (and a former student of Art's), and the Almquists started looking for a play about the border and immigration that would explore all points of view.

They had hoped to find something like The Laramie Project, the acclaimed "verbatim theater" drama from 2000 with a script crafted from statements by Laramie residents about the murder of Matthew Shepard.

When none was forthcoming, "Julian said, 'Why don't we do it?'" Art remembered. The trio agreed, but with the two men busy with their teaching jobs, Amy jumped in to write it.

"It's a docudrama using the words and subjects in the community," Amy explained. "It's a story of people interacting at the border every day and what it means to us."

Amy, a first time playwright who's performed as an actor in many Tucson productions, interviewed dozens of people, and wove their actual words into her script.

"I got in touch with people in the community, read articles, watched television. I interviewed a ton of people representing all sides of the issue."

She didn't put herself into danger, though, using written materials and interviews with others to get information on coyotes and vigilantes. But the final script incorporates the actual words of everyone from Border Patrol agents to migrants to activists, and from coyotes to vigilantes to humanitarians and ordinary citizens on both sides of the political divide.

A Border Patrol agent told her that the agents are not "bad people," despite a "lemon or two" who are. "I do my job with integrity," he said, and tries to comfort migrants who've been caught, giving them food and water.

By contrast, activists who spoke to Amy noted that Border Patrol often kick over life-saving water jugs left in the desert for migrants, among other abuses.

Rev. John Fife, an activist and a founder of the aanctuary movement, told her that the federal policy of militarizing the border has led to migrant deaths in the desert. (A migrant character in the play falls dangerously ill on the journey.)

Other informants told Amy that the issue that counts the most is that many migrants are entering illegally. A woman who describes herself as a conservative Christian explained that "my views are simple. There are rules and laws," and these must be obeyed.

An undocumented student at Tucson High who was brought to the U.S. as a young child described how he "struggles in a society that forbids him from doing what he wants," Amy said. "He would love to be in the military or go to college, but he's in limbo."

With some 45 characters in the two-act play, Amy sought to create a structure that allowed their stories to flow smoothly. A prologue has the student actors giving a summary of exclusionary immigration policy in the U.S. from the early days of the republic.

The play is enlivened by streaming video created by co-director Martinez. Running throughout the performance, the clips include migrants fleeing Border Patrol by night and, where possible, portraits of the real-life people whose words the student actors are reciting. Martinez also created a lively music soundtrack of Latino hip-hop, salsa, Mexican garage music and Mexican surf, by acts from Los Yetis and Calexico, to Budos Band and Manu Chao.

An inventive set has rolling border walls that are rusted and intimidating, just like the real border walls. But these flexible props sometimes become the walls of a Border Patrol vehicle filled with arrested migrants; other times, the walls of a holding tank.

Amy first wrote the play for 14 actors who would play multiple actors. But when Martinez and Art Almquist put up fliers for the auditions, an unprecedented 80 students—many of them new to theater—turned up to try out.

Thrilled at the response, the two co-directors tried to cast as many students as possible. They ended up with 45 actors and crew members, with each actor playing just one character.

"We have a majority Latino cast," Art said. "A lot have never done a play before."

The subject matter of Our Border Town is personal for many of the newly minted actors. Many have shared that they have undocumented family members, and they know about living with fear.

"At the first read-through," Art said, "kids were crying."