Midsommar is a slow burn that will fill you with dread 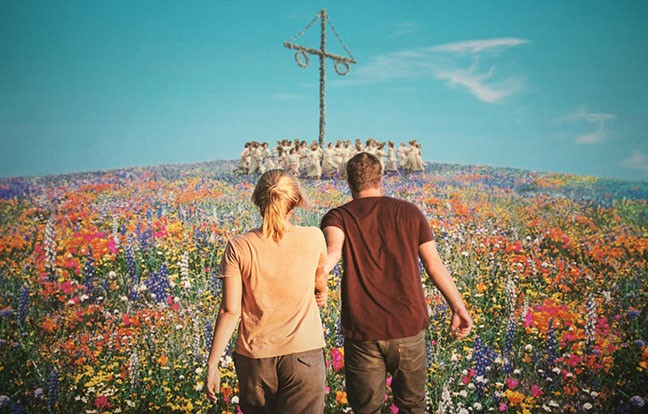 Two films in, and it's safe to declare writer-director Ari Aster a master of horror. His Midsommar, the sophomore effort to his masterpiece Hereditary, is two-and-a-half hours of nerve-fraying terror staged mostly in broad daylight, and it is a thing of demented beauty.

Dani (dynamite Florence Pugh) and Christian (excellent Jack Reynor) are having relationship issues. Dani is super dependent on Christian during a major time of need, as her sister is constantly bombarding her with dark mood swing modern correspondence (Translation: Toxic Emails). Christian half-heartedly provides what he tries to pass off as sage advice, but his heart isn't really in it and he's starting to think a break-up might make sense.

Then, tragedy strikes Dani's family, and it's really time for Christian to step up for his part of this committed relationship. His solution? Take Dani along on what was supposed to be a bro trip to Sweden for a traditional family summer festival. He sort of asks her to go, she sort of says yes and, before you know it, Dani is on a plane to Sweden with Christian and his friends.

Christian's crew consists of Mark (the always good Will Poulter), Josh (William Jackson Harper), and the resident Swede, Pelle (Vilhelm Blomgren), the smiley faced dude who suggested the trip. His family is the core of the festival, and he can't wait to show his pals their idea of a good time.

Shortly after arrival, Dani and friends ingest hallucinogenic mushrooms. The weirdness kicks in immediately and the movie comes off as a really bad trip. Take note of the many paintings on the walls throughout the film; they provide fun hints of the terrors to come. When two elderly members of the happy tribe show a totally sick commitment to the festival, it's an act that would make reasonable people flee. Christian and Pelle are doing a thesis for school, so they write off the strange goings on as "tribal" and stick around until the very end. Bad, bad call.

That end is a real scorcher, a final testament to lousy significant others. Pugh, so good in this year's Fighting with My Family, makes a grand statement with this movie. She's an acting force that puts her in the upper echelon. She throws everything out on the table, and it all pays off in a performance that will surely be one of the year's most memorable (as was Toni Collette's in Hereditary). Chris Pratt lookalike Reynor is a well-placed and sound counterpart, but this is the Pugh show.

One of the pleasures of Aster's latest is that it's obvious where things are going. It's a mystery that puts a ton of clues right in front of your face in vividly visible fashion as the sun shines brightly. While the movie is a deliberately paced slow burn, its nearly two-and-a-half hours pass by pretty fast. Aster never loses the sense of dread, so while you could call his movie predictable in some ways, it's not even close to being a letdown. It's a movie that constantly delivers on the dread it's promising in its every frame.

According to Aster, he was going through his own dark relationship issues when putting this film together. I feel very sorry for whoever was on the other side of that relationship. Aster's dark soul runs very deep, and he's a great writer. Some poor soul had their ass handed to them in their final email relationship Armageddon exchanges.

Midsommar stands as a nice companion piece to Hereditary. I see myself enduring a delightfully miserable double feature in the near future and purposefully bumming myself out, because, you know, that's why we watch horror films sometimes. Aster has a way of putting a lot of pain up on the screen and somehow making it all very entertaining, as well as being supreme nightmare fuel. As he did last year, he's made one of the year's best films. ■