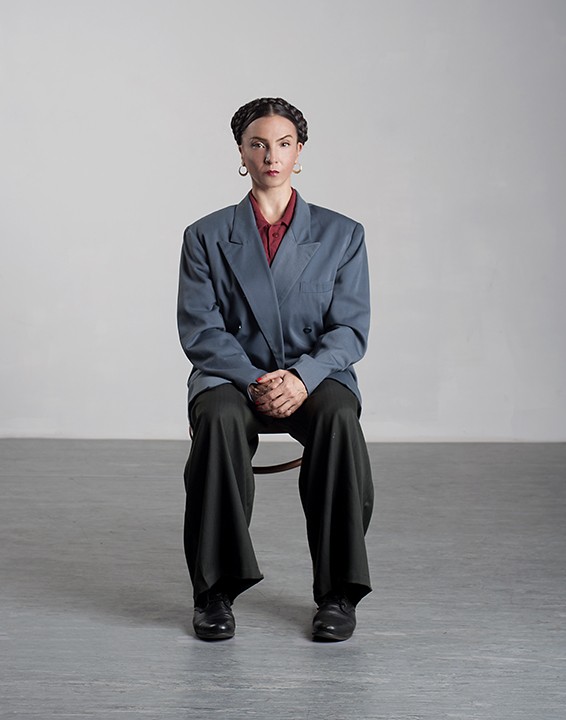 As an artist herself, dancer Claire Hancock admires Frida Kahlo, the über-famous Mexican artist who devoted herself to painting despite a lifetime of severe pain.

Kahlo is "what it is to be an artist. I relate to her independence, her enjoyment of solitude, even her back pain," says Hancock, who weathered a back injury earlier in her dance career.

Hancock got the chance to see many of Kahlo's works last summer, at an acclaimed exhibition at the Heard Museum in Phoenix. Kahlo's intense self-portraits have a "peacefulness on the face," she says, even when the paintings include the medical rods and cords and scissors related to her suffering.

One of Kahlo's best-known paintings, The Two Fridas, from 1939, pictures the artist twice, conjuring up her many dualities, from her mixed European and indigenous heritage, to her strong work ethic and the limitations imposed by illness.

Hancock hopes to capture some of these dueling qualities when she dances the part of the artist in this weekend's Frida, Artifact Dance Project's latest multi-media dance concert, an extravaganza of dance, acting, music and song performed by several dozen artists. Choreographed by Artifact's Ashley Bowman, the dances are in the troupe's trademark contemporary style of modern-infused ballet.

A cadre of six musicians will perform original songs by Lane Harmon and Roger King, and the singers of the Tucson Girls Chorus, directed by Marcela Molina, will act as a Greek chorus.

"There's no spoken word," Hancock says. "The songs are the text."

A slide show projected onto the back of the stage will give a tantalizing taste of Kahlo's paintings, immensely personal works—particularly self-portraits—that combine traditional Mexican folk motifs with psychologically charged surrealism.

The show's elusive narrative hits the highlights of Kahlo's life (1902-1954), from the trolley crash that left her with devastating injuries at the age of 18, her "push and pull" relationship with Rivera and her early death at 52.

"It covers the accident and goes to the point when she dies," Hancock explains. "But it's not linear. It's abstract and psychological."

Several years ago composers Harmon and King brought the idea for a Kahlo show to Bowman and Hancock, the troupe's co-artistic directors.

"Lane and Roger were inspired by the life of Frida, her pain, her energy and her art," Hancock says.

The couple has often worked with Artifact, collaborating with the dance troupe with their band Reverie. For Frida, they've composed 12 original songs, with six being performed in each of the concert's two acts.

"There's a thread of darkness" in the music, Hancock says, particularly in the violin riffs sounded by Heather Hardy. King plays guitar and he and Harmon both sing vocals. The musicians also include Danny Brito on drums, Mike Levy on bass and Matt Mitchell on guitar. (The songs have already been made into a CD, Inside the Blue House: Love Notes to Frida.)

Actor Johnston, Hancock's co-star, frequently makes appearances on Tucson stages, from Live Theater Workshop to The Gaslight Theatre. Last November, he had a lead role in The Value of Names at Invisible Theatre.

Though he's an actor rather than a dancer, "David does 'move.' He has a dance background," Hancock says. "He's been coming to company class and really enjoying it."

Likewise, Hancock, a longtime dancer who has performed with ODC/San Francisco and River North Dance Company in Chicago, also occasionally works as an actress, most recently appearing in The Grapes of Wrath at The Rogue Theatre.

And as it happens, Johnston and Hancock's physical traits echo those of the real-life Diego and Frida.

"It's interesting to play the roles with David," Hancock says. "He's older and has a bigger frame."

Kahlo was a small woman 21 years younger than Rivera, and he was such a big man that he towered over her, a disparity she captured in her 1931 painting "Frida and Diego Rivera." The double portrait pictures Rivera dwarfing his tiny wife.

The 9-year-old Artifact Dance troupe has long created pieces with a literary bent and a strong narrative, almost always accompanied by live music. In the 2017 season, Animal Farm, a dance rendition of George Orwell's novel, with vocals by the Tucson Girls Chorus, was followed by Dillinger, a dark look at the life of the famous gangster who was caught in Tucson. Ryanhood provided the live music.

Frida follows Artifact's fall production, Judith, a narrative dance about another fierce woman, a biblical heroine who slew a general to save the Jewish people.

The woman-centered season fits right in with this year of the woman, and the #TimesUp movement, but it was actually the Dillinger show that paved the way for this season's bounty of concerts about women, Hancock says

Though she herself danced a tough female gang member in Dillinger, she notes, the show was "very male. We said, next season, let's do women."