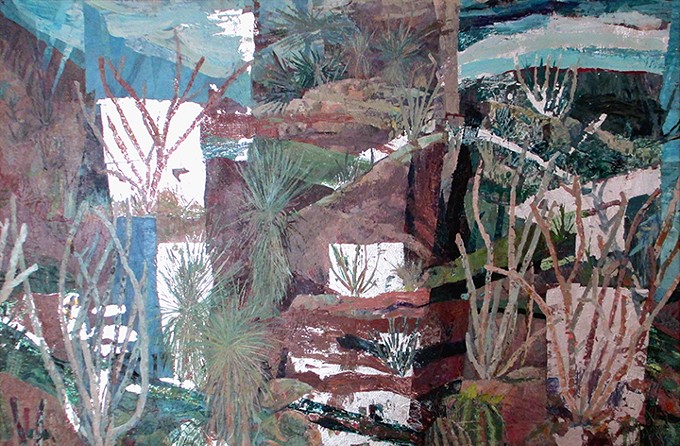 Tucson painter Charlotte Bender is off in an explosive new direction, fracturing landscapes and reconstructing them in exhilarating mixed-media paintings.

Her "Squared Hills" at Davis Dominguez Gallery is a riot of unrelated snippets of nature—desert plants and rocks writhing in one geometric plane, multiple skies and mountains jostling against each other, and cacti unexpectedly interrupting the heavens.

Patches of shiny silver foil glisten in between these disembodied bits of nature. Aside from that foil, the work is mostly a painting on canvas. But it feels like a collage, picturing a landscape that's been cut up and randomly rearranged like errant pieces of a puzzle.

This bracing work is one of six big paintings and three small ones that Bender has contributed to a lively three-artist show, which also features Albert Kogel's painted and carved wood panels and works on paper, as well as Joy Fox's burnt and incised sculptures in clay and metal.

Bender's new paintings mark a departure from her earlier work; in those older pieces, she painted striped cloth into her landscapes, draping the painted fabric into surreal peaks that echoed the of nearby mountains and forests. The new suite of paintings is quite different, hearkening back to a 1950s modernism, with simplified images, flattened perspectives and a propensity for abstraction.

Three small near-abstractions, stacked vertically, one over the other, are the least realistic of the new works. Called "Stacked Land–One," "Two" and "Three," these acrylics on canvas reimagine the landscape as a collections of distinct geometries. Flashes of red and turquoise slash across the canvas in "One" and "Two"; beneath the land is shaped into soft triangles and trapezoids and lines. "Stacked Land–Three," my favorite, pays homage to the sharp diagonal; a pink mass of rock careens diagonally down to a rhombus-shaped pool of crystalline water.

All three of these local artists have connections to Bruce McGrew, the late UA prof and painter who was a founder of the Rancho Linda Vista art colony in Oracle. Bender and Kogel both studied with McGrew, says gallerist Mike Dominguez, and Fox is his widow.

It's possible to look at their art and see threads connecting them back over the decades to McGrew. All three mostly deal with nature, real and imagined, in their works, as McGrew did. And a large McGrew oil, "Black Rock Landscape," presiding in a side gallery, calls to mind Bender's fractured works. It's a boldly colored expressionist work with salmon-colored mountains, red leaves and patches of lemon-yellow on a lake. Bender's work is all her own, but McGrew also splits nature, and pushes it into distinct and separate shapes.

Kogel, who heads the art department at Cochise College, takes fracturing literally: he goes at his works with a jigsaw. According to Dominguez, Kogel first paints on the flat wood surface, then saws it apart, only to nail and glue the pieces back together, layering them in sometimes startling combinations. Finally, he "attacks" the surface, carving and charring the wood.

He ends up not with a mere painting on wood, but with riveting three-dimensional wall works that are part painting, part sculpture. Two big horizontal works, "Mineral Garden" and "Tide Pools," are kaleidoscopic, bursting with spinning curves and rhythmic lines hurling across the surface. The complicated layers are mesmerizing.

Up close you can see the burnt wood, the dark patches spotting the original wood's pale tan. And atop the wood, the joyful "Mineral Garden" revels in greens and blues painted on elegantly cut slices of wood: some of these slices soar right of the edges of the work. In "Tide Pools," circular shells seem to roll across the sand-colored wood. Look closely at the many colored levels and you'll start to imagine you're seeing the teeming life in a seaside tide pool.

Kogel is mostly about nature and animals—his 3-D owl and bird works are adorable—but he's also done some surprising architectural pieces, portraits of Spanish colonial cathedrals made with the same burnt and sawed and painted technique. "Guanajuato" is a loose rendering of the yellow catedral prized by the central Mexican city. "Original Sin," shaped like a church, goes back to the Garden of Eden. A snake slithers along the church roof and the fateful red apple lies at the center.

Along with 11 of these elaborate wall works, Kogel also is exhibiting eight paintings on paper. They veer from beautiful, small, pungently colored acrylics like "In My Dotage 1" to "mixed technique" paintings whose dark brown burn patterns parallel the wood works.

Joy Fox's floor sculptures connect to Kogel's richly charred images: she also works with fire. Her pale clay totems, combined with rusted found metal, are fired in the kiln, and the resulting burn marks on their surface attest to their time in the flames. And like Kogel and Bender (who has a dog painting in the show), Fox loves animals.

Her creatures are mostly fantasy animals and beings who are both animal and human. One human might have wings, another an animal head. She incises these clay creatures with lines and patterns and even words, a kind of mark-making that's reminiscent of carved petroglyphs scratched into rock by ancient southwest Indians.

But her work is also about the modern world. Her metal finds seem to be scavenged from the desert, a place that our species routinely despoils. They include a Radio Flyer kids' wagon from the olden days (placed upright, it becomes a niche for that human with wings). Another wheeled vehicle of some sort—a discarded stroller, perhaps—makes its way into a standing piece called "Circling the Sphere" and rusty nails are embedded into a clay animal in "Iron Phoenix."

A tall totem that evokes the work of Northwest Indians, "Iron Phoenix" has a bird head and big wings fluttering outward from its body. Colored coppery rust tones by those nails, it stands on strangely wide legs in a pool of river rocks. Those legs made up of separate rough panels of fired clay. But Fox has taken these disparate fractured parts and fastened them together, making the revived phoenix bird whole once again.