Four on the floor

A quartet of candidates seek to replace Regina Romero on the Tucson City Council. 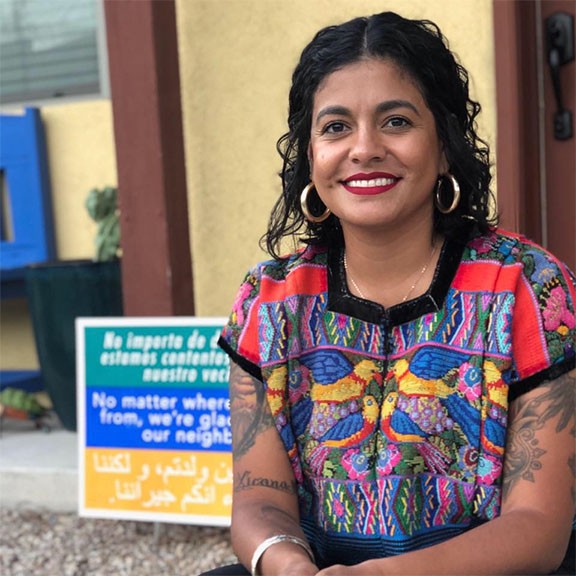 Courtesy photo
Lane Santa Cruz
With ward 1 councilmemberRegina Romero giving up her seat to run for mayor, four Democrats are battling in the Aug. 27 primary for her office.

If Romero has a say in who takes her place, she's rooting for Santa Cruz, who served as a Ward 1 aide for two separate terms. The two met when Santa Cruz was a student at the University of Arizona working with the César E. Chávez Holiday Coalition.

"[Romero] wanted to support young women and get them involved in electoral politics, so she succeeded at that," Santa Cruz says.

An avid bicyclist, Santa Cruz would like to see the city's transit system place more focus on Tucsonans who walk, bike or use a wheelchair to get around. As for new development projects, she wants to see community members set the vision, not city staff.

"Right now, what we have is professional planners who make decisions from their desks and computers and maybe have open houses here and there," Santa Cruz said. "They say, 'This is what's best' and then roll that out to the mayor and council and then they vote on it."

She also supports the idea of requiring developers to include a percentage of affordable housing in their projects.

To stave off the impending effects of gentrification, Santa Cruz wants to promote real estate sales in historic neighborhoods to local residents, instead of selling to outside investors who pay in cash, only to remodel a home and flip it at a high profit, creating a cycle of gentrification.

"The way that developers are aggressively targeting areas to invest in, we need to do the same to educate our families about what that means over time," she said.

Santa Cruz would like to see the city's local public schools serve as community centers, where GED and ESL classes are provided and vocational trade programs and apprenticeships are offered by labor unions.

While she signed the petition to put the Tucson Families Free and Together sanctuary city ballot initiative on the ballot in November, when local organizers were gathering support, Santa Cruz says she is neither supporting nor opposing the initiative. She expressed concern that it did not go far enough to address the problems immigrant communities are facing.

"Police accountability is just one side of that," she said. "We need to be doing more to protect folks by having a municipal ID, looking at issues of wage theft and making sure that our public transportation is suitable for folks who don't drive because they don't have a driver's license or they can't afford to pay for car insurance."

Santa Cruz has picked up several endorsements, including Planned Parenthood Arizona, Living United for Change in Arizona (LUCHA) and a handful of local labor unions.

She's also been the top fundraiser in the race, with nearly $37,000 contributions as of June 30. She has qualified for the city's matching-funds program, meaning she has received nearly $32,000 in public dollars for her campaign.

While santa cruz may be closely familiar with the Ward 1 council office, Hamed spent close to a decade working as a congressional aide to Rep. Raúl Grijalva. Today, he works for the Southern Arizona Association for the Visually Impaired helping other individuals with blindness become independent. He is also a U.S. citizenship exam instructor.

In 2010, Hamed ran a campaign for a state representative seat in District 27, which covers much of Ward 1.

Today, he wants to work on attracting more affordable housing developments to the area, as well as keeping houses in the historic neighborhoods affordable for those who have lived there for decades.

"I live in the Menlo Park neighborhood so I see gentrification happening around me every day," Hamed said. "I would propose that people who have lived here a long time are given a city property tax freeze. It would be in place as long as they live in and own the home, but once that home gets sold by them or any surviving family members if they pass on, that freeze would be off the table."

Hamed, who uses the city's transit system on a daily basis, believes the routes should be extended further to reach more locations. He supports a fare increase to make that happen.

"Our most recent fare increase was in 2017," he said. "Prior to that, fares haven't been raised in about six years. Fare increases have to occur, people who want to use transit have to pay a small proportionate amount in order to help keep the system going."

Hamed also wants to find ways to boost funding for the city's police department. He believes more cops on the streets will create faster response times, prevent crime and create a safer city.

"That physical presence of a police officer makes a difference," he said.

Hamed does not support the sanctuary city initiative.

Ward 1 constituents have told Hamed they want a council member who responds to their issues and concerns.

"I tell voters if you elect me I will hire the best staff, we will respond to you however you contact us, and I'll be a full-time council member," he said. "I'll quit my job if elected."

Ortega, another familiar face in local politics, began his professional life working as a substitute teacher at Cholla, Tucson and Sunnyside high schools.

After serving as chief of staff to former council member Karin Uhlich (who has endorsed his opponent, Santa Cruz), he ran unsuccessfully for the TUSD school board. He has also worked as a consultant to small local businesses and hosted a radio show.

Ortega argues that the council should better vet companies that want to relocate in Tucson and require them to provide high-wage jobs, benefits, union positions and environmentally-friendly policies in exchange for any government subsidies.

He also believes the city government needs to do more work to educate homeowners who face rising property taxes on their options.

"It is about not having the programs necessary to assist you," Ortega said. "The city needs to do more to educate people and advocate for ways to mitigate people's expenses."

He believes neighborhood associations are sometimes given the "runaround" by bureaucrats and he blames tax incentives and rezonings for contributing to gentrification.

"I do not accept the argument that you have to find a way to fund police only, that you're either with or against police officers," he responded. "It's much broader. We want to find ways to make safe communities, fund preventative programs. I don't think it's productive to just focus on police."

Ortega "wholeheartedly" supports the sanctuary city initiative, and criticized other Democrats for not backing it.

Ortega believes elected officials need to follow the lead of local movements and be more in tune with what residents really want. He says voters tell him the lack of responsiveness when it comes to basic constituent services is troubling.

If elected, Ortega vows to open a satellite council office on the south side of Ward 1, in order to have a more definitive presence for all constituents.

He's won endorsements from former state lawmaker Wenona Benally, the American Federation of State, County, and Municipal Employees and several Ward 1 community advocates. As of June 30, Ortega's $9,244 in campaign contributions had been matched by $7,884 in matching funds.

The only candidate not participating in the public matching funds program is Elias, a retired professional baseball player turned marketing executive.

He believes his love for local politics can serve Ward 1 constituents well. And while he has never run for office before, he does have one thing going for him: The same last name as Pima County Supervisor Richard Elías. Even though they are not related, many voters could cast a ballot based just on name recognition.

His most public work was co-founding the Oro Valley Music Festival in 2015. It started as a one-day event with small local acts, but grew into a two-day festival that drew national performers and millions in economic impact.

"The next 10 years in Tucson are going to be crucial with the decisions we make today, so I want to help guide Tucson to its prosperity," he says.

With the help of Rio Nuevo and Sun Corridor, Elias believes Tucson has attracted big companies such as Caterpillar to the region, which has "changed the landscape" of the city.

Gentrification is a "growing pain," says Elias, who views Menlo Park, Barrio Anita and Barrio Hollywood as the neighborhoods most at risk of seeing long-time residents displaced.

"I love Fourth Avenue the way it is and I hope it never changes," Elias said. "Do I want to see Tucson progress? Absolutely, but never lose that feel that we have in those cool places."

If elected, he would want to see any development that comes into those areas be "fully vetted." He mentions the Community Benefits Agreement between the Historic Fourth Avenue Coalition and Tennessee-based developer EdR—who plans to build market-rate apartments where the Flycatcher bar once stood—as a perfect example of responsible growth.

"People are okay with development, as long as they can give input about what's being developed," Elias said.

He wants to see the city continue the work of Prop. 101, with necessary updates made to the large arterial roads. Elias agrees with the idea of converting the SunTran bus fleet to electric vehicles. He also supports expanding the downtown streetcar route, although a major funding source would be required to make that happen.

He says the city needs to educate the public on how the city's recycling program works. On a recent trip to a local recycling plant, Elias said he saw lumber, cacti, tires and propane tanks coming out of the trucks. He would like to explore organizing an educational campaign that would tell Tucson residents about the do's and don'ts of recyclable waste.

In an answer very similar to the city's Democratic mayoral candidates, Elias says he supports the sanctuary city initiative "in spirit," but believes it's poorly written and takes away resources that are necessary for the police department.

The political newcomer admitted he never imagined running for an elected office, but somewhere along the way he decided it's up to the community to do a better job. ■