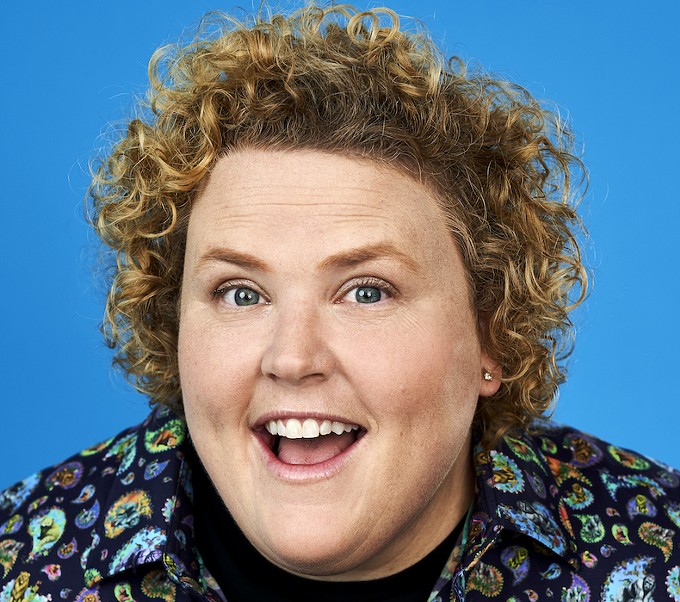 For a child of the bourgeois south, Fortune Feimster has toed right up to, and sometimes crossed, many borders of her childhood culture. With the merest hint of a Carolina cadence, she opens her set relating how she grew up not quite like the others.

Having had only brothers, she said she was always a tomboy. She translates that, with a wink, as “future lesbian.”

What made it especially tough was a mom who “didn’t get the memo” that her family’s fortune had been lost to gambling. Feimster was raised as a delicate flower, as refined as possible. She notes the irony that the term for her debutante season of fancy dresses and dance parties was known as “coming out.”

One of her most memorable, hilarious and ultimately metaphorical stories is about her plucky venture into competitive swimming. Ever zaftig, Feimster loved the snack bar, but she said the only way she could get through a lap was to stroke with her arms . . . and walk along the bottom. She allows that she and swimming soon parted ways “by mutual agreement.”

Feimster’s physicality, remarkably diverse and fluid, is of a piece with her jokes. It’s impossible to imagine one without the other. Her gestures and strides, and the fluency of her expressions, ground her material and bring it to life.

And all’s well that ends well. By midset we learn she wound up a college tennis champ, an unsurprising detail given what we now know of her intellect, ambition and tenacity.

Feimster released her first hour-long Netflix special, “Sweet & Salty” in 2020 and now tours regularly. Although she launched her comedy career as a member of improv’s vaunted Groundlings Sunday Company, she first became known as a writer and panelist on “Chelsea Lately.” She went on to star as a series regular on “The Mindy Project” and had roles in “Glee” and “Dear White People.”

A recurring guest on Showtime’s “The L Word: Generation Q,” and CBS’ “Life in Pieces.” She’s also been tapped to judge “Ru Paul’s Drag Race.” She was found to be an ideal fit for the voice of Evelyn on “The Simpsons” and Ava on “Summer Camp Island” for the Cartoon Network.

Feimster has performed standup sets on “The Late Show with Conan O’Brien” and “Late Night with Seth Meyers,” and her half-hour specials on Comedy Central were included in the first season of “The Standups” on Netflix. She currently stars opposite David Spade on the new Netflix series, “The Netflix After Party” and she chats with her friend Tom Papa every morning on “What A Joke with Papa and Fortune” on SiriusXM’s channel 93 for Netflix. The pair have interviewed scores of comics, talking about all-things comedy.

For all of that it’s Feimster’s writing that may most affect her future fortunes. When she starred in her own Tina-Fey-produced pilot, “Family Fortune,” for ABC, she attracted the attention of Steven Spielberg’s production company, Amblin. The company has since acquired two of her feature film projects, both including her as a star.

A UA administrator by day, Eunice Gonzales spends the rest of her waking hours thinking of ways to build community, or, more accurately, communities. It couldn’t be a nicer goal. So to play on her name, and the nature of her dreams, she calls her side gig “Mi Vecina Nice Productions.” Roughly translated, it means “My Nice Neighbor.”

Bringing people together to share resources and support each other is her passion. And she’s got the skills to do it. She’s personable, articulate and committed, and experienced in organizing and promoting community events, specifically, The Great Tucson Beer Festival.

That event benefited Sun Sounds of Arizona, a news service for the blind. At the time, she was on its board. Now she’s trying to leverage her leadership and promotion skills to put a little cash in people’s pockets, including, perhaps, her own.

To that end, she created a new kind of comedy show on the Tucson scene. She named it Wild Cardz and road-tested it on Aug. 6. She’s hoping that her Sept. 4 show, “Wild Cardz presents Comic Comics,” will bring a costumed influx of Con attendees to move her closer to her goal.

“Everyone will be in costume and we’re encouraging comedians to consider putting character jokes in their sets,” Gonzales said.

She said what sets Wild Cardz shows apart is her emphasis on onstage inclusiveness and audience participation. “It’s not like shows where the producer invites the headliner and the lineup,” she said. “Anyone who signs up ahead can get three minutes of stage time in the show’s first half. They’re encouraged to do their best because the audience will vote for four favorites to do 5-minute sets in the second half.”

“The audience votes again after the second round, and that winner will headline the next show. Headliners earn a double share of the show’s earnings. Everyone else gets an equal share after Gonzales’ production company,’ Mi Vecina Nice, pays the show’s expenses.

Gonzales said the prospect of earning even a small share can encourage a new comic to stay motivated to become a headliner one day.

The rest of the weekend