Through Sept. 7
Etherton Gallery, 135 S. Sixth Ave.
11 a.m. to 5 p.m., Tuesday through Saturday
Free
624-7370; Ethertongallery.com
EXTRA: The exhibition also includes 28 Grand Canyon images by 15 other photographers, from 19th century artist William H. Bell to the early 20th century Kolb Brothers, all the way up to 21st century practitioners Mark Klett and Jody Forster. On Saturday, Aug. 31, art prof Ray Parish will display his giant camera obscura, a 1948 vintage trailer that’s a working pinhole camera. On view in the gallery parking lot from 3 to 5 p.m. Also on Aug. 31, from 5:30 to 7:30, Jack Dykinga will be in the gallery to sign his books and give a slide show and talk.
The first time Jack Dykinga saw the Grand Canyon he was a "typical, motorized tourist in a long line of cars driving from viewpoint to viewpoint," he writes in the introduction to his new book Grand Canyon: A Photographer's Favorite Viewpoints.

"I rolled down the window, peered into the bright, midday light, and kept going... Since then, I have realized the Canyon requires more from its visitors. To truly see the wonder, one needs to be there when the sun is low on the horizon and crimson rays create a sense of magic."

For years now, acclaimed photographer Dykinga has more than followed his own advice. He makes pictures when the sun is low and the rock cliffs are crimson, to be sure, but he haunts the place at all hours and at every season, from the canyon's coniferous forests on the high plateau to the Colorado River far below.

In his sumptuous show at Etherton, timed to coincide with the Canyon's 100th anniversary as a national park, the photos show us the canyon in golden light, in snow, in storms, at daybreak and at twilight.

Dykinga captures a rare winter fog atop a soaring stone spire in "Mount Hayden Dream," 2016. "Little Colorado," from 2002, takes us down to the river, where the blue waters are as placid as a lake, and the canyon walls shift between dark and light. 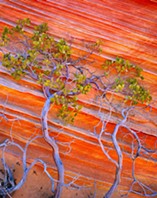 A human-made watchtower is captured twice, in two kinds of weather. Lightning crackles over the stone structure in "Sizzling Watchtower," 2007, and a darkening sky warns of a storm. In the other shot, "Desert View Watchtower, from 2011, the forecast is good, and a spectacular sky, all orange and purple, lends its colors to the tiny tower below.

Too many Grand Canyon photos are clichéd, but Dykinga's are "not stereotypical," gallery owner Terry Etherton says. "They're just better than everyone else's."

Dykinga, a longtime Tucsonan, started his career as a photojournalist in Chicago, where he was born in 1943. When he was just 28 years old, he won a Pulitzer Prize for his pictures of mentally disabled people living in wretched institutions run by the state. Making his way to Tucson, he joined the Arizona Daily Star, but after five years went out on his own, determined to make photos that would champion the environment and protect it.

Publishing frequently in National Geographic and Arizona Highways, Dykinga has worked in many locations in the U.S. and abroad, but he's probably best known for his images of his beloved Arizona. 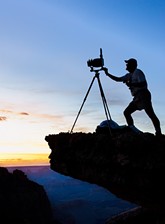 He teamed up many times with Charles Bowden, the late author, to explore the state's beauties, and the pair collaborated on several books that lionized the land through words and images. Among their books are Frog Mountain Blues, The Secret Forest, Stone Canyon of the Colorado Plateau and The Sonoran Desert. Dykinga's latest book, Grand Canyon, has a posthumous essay by Bowden.

Etherton believes that Dykinga's photos are about survival: the survival of the cherished landscapes they picture, as well as the survival of humans—like Dykinga—who survive these sometimes dangerous places.

Dykinga was 71 when he nearly died in a violent sandstorm at the Grand Canyon five years ago. His lungs were destroyed and he had to be air-lifted to a hospital in Phoenix, where his life was saved by a double-lung transplant. But that Grand Canyon close call won't keep him, at 76, from returning to the landscape he loves.