Cabaret Theatre at the Temple of Music and Art, 330 S. Scott Ave.

The Princess Who Wouldn't Smile

Presented by All Together Theatre

Kevin Johnson is in the pink of his passion these days. The founding artistic director of Arizona Onstage Productions is directing not one, but two musicals which will share the same space—the Cabaret Theatre at the Temple of Music and Art—for the next few weeks. The intimate musical Closer Than Ever will open Friday and the smash hit Pinkalicious, the company's first children's show, will open the next week. They will both run in rep through Aug. 18.

"I know it's crazy, but I've really wanted to do this (Pinkalicious) not only because it's a great show, but because I want to start developing a children's theater as part of this company. I work better under pressure anyway. I had the time since it was summer (Johnson teaches theater at BASIS Charter School) and since we're already renting the space for Closer Than Ever, I thought, 'let's go for it.'

"I've been looking at other cities our size and I really think there is a market here for a professional company producing smart, intelligent theater for children that will be attractive to adults as well. Live Theatre Workshop's education program is great, but because of their other programs they can only present one performance a week. And a lot of what comes through here for kids is really more pageant or spectacle. It's fine, but it's not what theater for kids can be."

Pinkalicious is based on the immensely popular book of the same name by Elizabeth Kann and Victoria Kann. They developed it into a musical with orchestrations by John Gregor, and it opened in New York at the Vital Theatre Company in 2006. It has enjoyed sold-out runs at various venues in New York ever since and has been touring the U.S. and Canada for several years.

Pinkalicious is a young lady who loves the color pink, especially pink cupcakes. One day she eats too many and upon waking the next morning discovers she has turned totally pink, which thrills her but horrifies her parents. This warrants a visit to the doctor where she receives some stern advice about eating the right things, which can actually reverse her condition. But does she listen?

"It sounds girly," Johnson said, "but it's not really. And then I listened to the score. It's intelligent, it's funny, it's witty. There are some things that might fly over the heads of the kids, but their parents will get it. And I really like that it's not preachy, but it brings up some subjects like—well, her little brother loves pink, too, but has been told he shouldn't. So there's the importance of being comfortable about who you are and what you like. And also, there's that Michelle Obama message of, we are what we eat.

"I also wanted to do a show with some name recognition, because there is a growing trend, especially with adult theater, that people don't want to take a risk on seeing something they don't know. But it is so critical that we give kids opportunities to see great theater—quality theater made for them. People underestimate kids' intelligence. They get everything. But it's scary that when I go to the theater, I don't see the teens, the twenty-somethings, the thirty-somethings. Everybody there has the same color of hair as I do—gray. We need to cultivate the idea that theater is a part of your life growing up."

Across town at Live Theatre Workshop, Amanda Gremel can speak genuinely to the importance of a youngster's exposure to theater. Now a regular actor with the company, she is the assistant director of the theater's education program, which includes year-round musical theater classes for all ages, workshops in schools, and the All Together Theatre, which produces shows performed on site at LTW.

In fact, the program just won a "Lumie"—an award presented by the Tucson Pima Arts Council to individuals and groups "that make Southern Arizona a wellspring of creative vitality."

"I started as a student and now I'm running All Together Theatre, and my experience at ATT is the first credit listed on my resume," says Gremel.

Michael Martinez, who is the LTW's director of education, explains that ATT is not just a children's theater. "We try to focus on people of all ages from all walks of life coming together to enjoy theater as a group."

For the productions of All Together Theatre, Martinez says they rely on writers and musicians from the Tucson community to write about 90 percent of their shows. Their current show, The Princess Who Wouldn't Smile, was penned by Leslie J. Miller, and Martinez composed the music. There is usually a mix of child and adult actors, and although some of the kids might come from the program's classes, there are auditions.

"Our space is so busy with classes and rehearsals and performances on the main stage that we can only perform once a week," says Martinez. Each show runs from eight to 10 weeks on Sundays at 1 p.m.

He underscores the importance of generous donors who underwrite the program's activities in the schools. "They support our going out into schools where kids would never have exposure to any kind of theater."

Says Gremel, "A woman came up to us once and she was crying and said, 'I'm just so thankful that you came here. My son doesn't like to speak out in class; he's the one who always sits in the back, and we had no idea that he could do this.' It can really bring kids out of their shells.

"I think that through our education program we are bringing up great people. Seeing and understanding different characters can help them find who they are and feel comfortable becoming whoever they want to become."

Adds Martinez, "It's important to focus on creativity as part of education because that is what feeds innovation. Every career requires one to think creatively. We need to nourish that."

It's All Happening at the Zoo

Clean Comedy: When you laugh at the same jokes 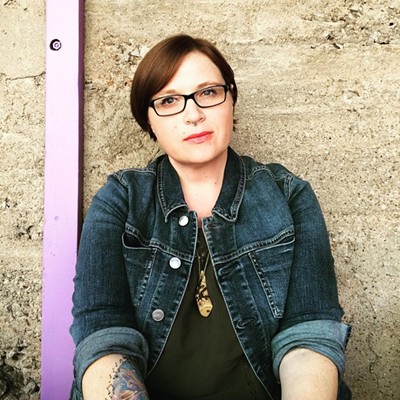