Winding Road’s The Big Meal is a theatrical feast

By Holly Griffith, Taming of the Review 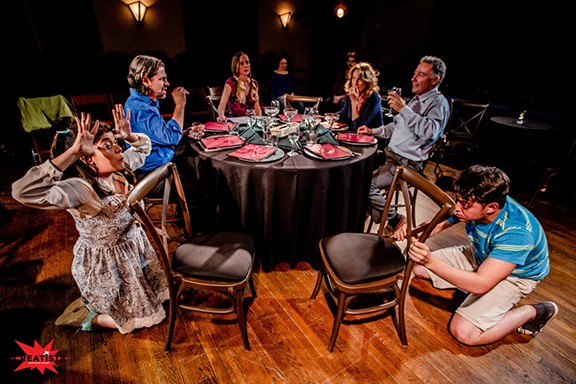 Photo by Creatista Photography, courtesy of Winding Road Theater.
The cast of The Big Meal.

Presented by Winding Road Theatre
The Cabaret Theatre at the Temple of Music and Art, 330 S. Scott Ave.
7:30 p.m. Dec. 20-21; 2 p.m. Dec. 22
$28, with discounts for advance purchase, seniors, students, military and first responders
520-401-3626; www.windingroadtheatre.org
Winding Road Theatre showcases ensemble talent and honest storytelling in their latest offering, Dan LeFranc's The Big Meal. The play opens with a flirtatious encounter between characters Sam and Nicole, a young couple who meet in a restaurant. Over the course of the play, they date, fall in love, fight, break up, reconcile, get married, have children and grow old together. We meet their family members, witness their joys and share in their grief.

But don't be fooled by this predictable, even clichéd plot. LeFranc's theatrical twists, buoyed by an excellent ensemble and skillful direction, make The Big Meal a flavorful feast of family dynamics.

The first theatrical curveball LeFranc throws is his fast-paced structure of short scenes that follow one another without marked transitions. The actors must shift time, place and tone in the space of a breath, and this cast handles the challenge beautifully. They move as a unit, making rhythmic shifts that clarify the passage of time without being heavy-handed. This is a difficult, delicate technique to master, but this ensemble (Tony Caprile, Damian Garcia, Cynthia Jeffery, Chris Koval, Kat McIntosh, Lena Quach, Danny Quinones and China Young) blazes forward with astonishing skill. The production is airtight, and it needs to be. The actors fly through the script at a rushing pace, never missing a beat, overlapping lines and even entire conversations, unafraid to talk like a real family. The effect is sometimes chaotic, but in a good way. The stage becomes electrified with dialogue, and the audience can only revel in the realness of it all. The lines we miss, the conversations we choose to ignore, the big personalities that drown out the more measured ones are all part of the experience.

The second twist is a complex web of casting that unfolds over the course of the play. As Sam and Nicole age, the actors who once played their parents are re-cast to play the middle-aged versions of our protagonist couple. Similarly, the actors who once played Sam and Nicole in their 20s shift to portray the couple's children, friends or lovers. Later, the actors who first played Sam and Nicole's grandparents portray the pair in their old age, and the rest of the ensemble shifts accordingly. In only 90 minutes, we meet five generations of family members, several sets of children and parents, multiple iterations of characters at different ages, and a veritable army of boyfriends and girlfriends, all acted by the ensemble of eight. Not an easy feat for any acting company, but Winding Road nails it. The company provides enough clarity to keep us along for the ride without sacrificing the honesty of the scenes.

Director Maria Caprile handles this web of family dynamics deftly. By staging the play in the round, the story sings. As the characters whirl around the play's central set piece, a circular dining table, the audience is presented with a kaleidoscope of relationship combinations, ever-shifting, ever-circulating and beautiful to watch. Each shift in the kaleidoscope brings a new image, but with colors and shapes reminiscent of the last, inviting us to make connections between generations and among relationships. Seated around the intimate Cabaret space at the Temple of Music and Art, we are able to watch not only the characters onstage, but our fellow audience members across the room. They become part of the drama, and also somehow part of the family. We share their joy and grief in the same way we share Sam and Nicole's.

Alex Alegria's lighting design is powerful. He and stage manager Samantha Severson work together to punctuate the rushing scenes with a handful of expertly crafted passages of surrealism, each designed to represent the death of a character. These moments are somehow both familiar and chilling, a layer of nuance that I attribute to Alegria's lights.

The unshakeable ensemble, honest script, and thoughtful direction make The Big Meal a triumph for Winding Road. Pull up a chair and enjoy it for yourself. ■