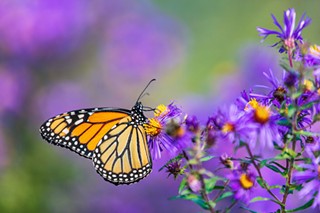 A new report examining more than 400 species of butterflies throughout the western United States has found that butterfly populations are declining at an estimated rate of 1.6% per year, and these declines are particularly associated with warmer autumns.

The report was published this month in the journal Science, and utilized the power of citizen scientists to document butterfly populations for more than four decades. Particularly shocking, the report found that the population of the iconic orange-and-black western monarch butterfly has declined by 99% since the 1980s.

The report “Fewer butterflies seen by community scientists across the warming and drying landscapes of the American West,” states that the pervasive declines in butterfly populations advance our understanding of climate change impacts and suggest that a new approach is needed for butterfly conservation.

“The surprising result for us were the fall changes in temperature,” said Katy Prudic, a co-author of the report and an assistant professor of citizen and data science in the University of Arizona. “As fall got warmer, there was more evidence of butterfly decline. Fall is not a season that people think about as much as having an impact on organisms, it’s mostly spring. But this research shows how important fall is.”

Data for the report was gathered from more than 70 locations throughout the western US, and took place from the mid 1970s through 2019. The data came from three sources: University of California Davis professor of evolution and ecology Art Shapiro, who has monitored butterfly populations across central California for more than 45 years; the online science network iNaturalist; and the North American Butterfly Association’s annual Fourth of July Butterfly Count, which was launched in 1975.

The main analysis happened from the Fourth of July Butterfly Count, which is a nationwide, volunteer, one-day census of butterflies throughout the country. This data was confirmed by professors and researchers at multiple universities who co-authored the report, as well as scientists at iNaturalist.

Butterfly species in decline around the Tucson area include monarchs, the queen butterfly, western giant swallowtails, painted ladies, and the Pima orangetip.

Prudic says warming fall months can damage butterfly populations by limiting food resources in the fall and confusing the butterflies’ natural cycles. Plants die off faster with increased heat and drought, leaving the butterflies less to sustain themselves with through the winter.

“We’ve seen declines in other places like Europe and the eastern United States, but having this connection to a certain point in time helps us think about mitigation, or more precision in our management and restoration implementation,” Prudic said.

“Butterflies are basically preparing for hibernation during that fall period, and having it be warm probably provides them weird environmental cues, so they may not be making the right changes to get ready for hibernation. They might think it’s spring or summer for longer, and go on and have another brood without the proper resources.”

Another point in the study is that populations are decreasing in all environments, not just urban and suburban areas. According to the study’s lead author, Matthew Forister, a biology professor at University of Nevada, Reno, the population declines observed in wild spaces mean “we cannot assume that insects are OK out there far from direct human influence. And that’s because the influence of climate change is, of course, not geographically restricted.”

According to Michael Crimmins, a professor in UA’s Department of Environmental Science, the period between September and November has warmed about 0.2 degrees Fahrenheit per decade over the last century in Arizona.

And while longtime scientific institutions remain authorities, a movement of “citizen science” has been growing in past decades, particularly increased by the advent of the internet. Prudic says independent citizen researchers were imperative for this butterfly report.

“I think of citizen science, or community science, as scaling up data collection,” Prudic said. “We’re talking about half a continent of everyone collecting data the same way. When you think about data collection as a scientist, you’re always thinking about quality assurance—and I will say that most people who are going out and looking for butterflies for fun know what they’re doing. They’re enthusiastic and often come with years of experience.”

Websites like iNaturalist serve as networks for independent and volunteer researchers to work with established scientific academies to map and share observations across the globe.

“The Fourth of July butterfly count has data that goes back to the ’70s, which is great. But the amount of data from 2010 to 2019 blew everyone else out of that water. iNaturalist just has so much more data, and that’s the amazing part of it,” Prudic said. “This is a way to create community and enthusiasm, just like social media. Things can be picked up and behavior replicated.”

“There’s lots of different opportunities for people, lots of types of citizen science for people to do,” Prudic said “So I think people should hunt around until they find one that matches the community they want to spend more time with.”