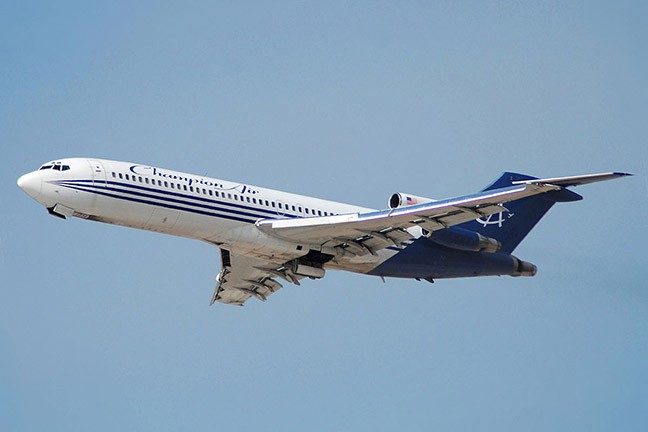 Courtesy
Pima Community College maintains a hangar at Tucson International Airport with a Boeing 727, multiple classrooms, labs and other amenities for students.

It's no secret that Pima County is a hub for the aerospace and defense sectors. With big companies like Raytheon, Sargent, Bombardier and Ascent, Pima Community College's Aviation Maintenance Technician program helps fill a growing demand for skilled workers in the industry. In fact, the demand is so high they can't keep up.

Ian Roark, PCC's Vice President of Workforce Development, said business leaders from across Pima County and representatives from leading industry employers came to the college and said "Your program is great, we just need more of it."

Gov. Doug Ducey recently proposed $20 million of state funds for the program in his fiscal year 2019-2020 budget plan. That plan still needs to go through review and editing by the state Legislature later this year.

The college's aviation training program falls under the Federal Aviation Administration Part 147 program, which refers to the statues in FAA regulations that govern aviation technology programs.

Roark quickly clarified that PCC does not certify for pilot training, as many assume when they hear "aviation." They instead train the technicians in the aerospace industry, specifically Airframe and Powerplant (A&P) technicians and related specialties.

"Any time that you are flying commercial, or if you had the luxury to have a business jet of your own, an A&P is the individual who is making the necessary repairs or modifications to the aircraft whenever something could potentially go wrong," Roark said. "Some people refer to them as mechanics, but the skill set is really quite robust."

A&Ps deal with everything from the structure of an aircraft to the engine, electrical systems and avionics. For about $10,000, anyone who can meet the basic entry-level requirements of the program (and may not even have knowledge of hand tools) can graduate and be ready for the FAA's certification exam in just 19 months.

In addition to the 19-month main program, there is also a "Part 65" program where anyone who worked on aircraft in the military can come to Pima Community College, take a test to gauge their skill level, compare that to what is required by the FAA for licensure and complete an eight-week boot camp program to fill in their knowledge gap.

"They can leave the military, come to Pima Community College and not have to go through the entire 19-month training and instead go through an eight week boot camp that prepares them to sit for the FAA licensure test," Roark said.

PCC also offers the first part of the A&P training to high school students through a JTED program. Students from any of the participating high schools in Pima County, if selected, can receive training during night classes. When they graduate from high school, the students can transition months ahead into the main program, saving them money and time to enter the industry even earlier.

The FAA regulates the number of students that can enter these types of programs at any given time. There are two or three cohorts annually, which make up about 125 students in the program each year. About 75 of those students graduate on an annual basis.

The Part 65 program for veterans fluctuates, but began two and half years ago and has graduated 90 technicians. With the proposed $20 million, these programs could expand to serve 250 students and graduate 125 each year.

The program has an 80 to 90 percent completion rate, and Roark said most of the students pass their certification exams. Pima's A&P program has a positive reputation among industry employers nationally who often express interest in hiring graduates as soon as they become certified.

"Our desire, of course, is for them to get jobs locally and regionally, but it's a very competitive market," Roark said. "The A&P technician market in the United States and, in fact, the world is one of the most competitive labor markets that there are."

The graduates often get jobs paying an average $55,000 annual salary, according to Roark. Most of those positions are guaranteed overtime, and former students often tell him they make $70,000, $80,000 or even upwards of $100,000 per year.

"It doesn't take long after you get some traction in the industry and some additional skill sets and training, it's easy for somebody five to 10 years into the industry [to make] six figures," Roark said. "So as far as the return on the value for our students, for the community and for the industry, it is a top-notch program."

All faculty in the program are required to have their FAA license and certifications, industry experience and meet the teaching qualifications of the college. The classes are held five days a week for five weeks at a time, with short breaks in between. Roark said the training is intentionally intense in order for students to master technical skills and meet certain requirements of the FAA.

The $20 million PCC asked for would more than double the size and scope of the aviation program. The college currently has one large aircraft hangar located at the Tucson International Airport housing one of two Boeing 727 commercial airplanes, multiple classrooms and laboratories for riveting, composite materials and avionics.

"The [money] will be used to expand the classrooms, the labs and include another hangar and therefore we will be able to double the output of students that graduate from the program," Roark said.

It will also allow for an expansion of the Part 65 and JTED programs. Roark said it is clear there is a market for this type of training because there is already over a year's worth of students on a waiting list to get into the current program.

Another factor facing the technical industry right now is the anticipated shortage in talent due to baby boomers retiring. Whenever the current technicians in aviation retire over the next decade, Roark said there will be almost a missing generation of workers. In order to make up for that gap, he believes these are the type of forward-thinking

strategies that will ensure the viability of the aviation industry in Arizona.

As part of an economic development strategy, Roark said the cities where talent is being produced is where businesses will expand and potentially relocate. By expanding the aviation program, PCC is signaling to employers they have the workforce necessary to make Tucson an even larger hub for aviation technology, education and training.

$20 million is a lot of money in the funding-starved education field. Why is this a better option than distributing the money equally across the entire college? Roark said it makes better returns on investment for the taxpayers.

"Our approach has been and will be to work directly with employers and our community partners to get very specific about the needs in these areas and then ask and make a well-formed proposal to those we are seeking funding form, including the state," he said.

When the state government cut all funding to Pima Community College and the Maricopa Community College District four years ago, Roark said it was certainly not beneficial, but it gave the college an opportunity to reflect and reassess their mission as an institution.

"Even prior to the cuts, [PCC Chancellor] Lee Lambert knew that the college really had a disconnect at the time with the needs of business and industry," Roark said. "From his arrival, and many changes since, we have been intensely focused on being attuned to our customers."

Lambert, who has been chancellor since 2013, said he is a big proponent of strategic investments.

"The highest return on investment for the taxpayers is jobs," he said. "We had a study done in this region on economic development, which showed that there are good jobs in this community tied to aviation. The investment in workforce education will lead to opportunities in jobs which will only improve our community in the long run."

He believes $20 million for the aviation program will benefit the students who want a well-paying career as well as the industry's employers who need more skilled workers. It's an ecosystem, Lambert said, and PCC is doing its part to ensure the whole system benefits.

Lambert said the $20 million is especially useful to the college because it takes a lot of resources to produce high-quality technical training programs. It costs much more to train someone to be an A&P than it does to train a traditional major because of the required laboratories, equipment, as well as maintenance and replacement of that equipment.

"That's why these targeted investments come in handy," he said. "Tuition alone is not enough."